Quick Navigation show
1 What is Erbazzone?
2 A Specialty of Reggio-Emilia Cuisine
3 A Short History of Erbazzone
4 Erbazzone: Characteristics and Ingredients
5 What are some variations of Erbazzone?
6 Erbazzone Recipe
7 Erbazzone
7.1 Ingredients
7.1.1 For the stuffing
7.1.2 For the pastry
7.2 Equipment
7.3 Instructions
173 shares
Recipe Print

Crisp, light, fresh, and delicious, this is Erbazzone. Erbazzone is a thin savory pie made from a simple pastry filled with fresh greens, meat, and Parmigiano-Reggiano cheese. It is a specialty of the Reggio-Emilia cuisine and makes for a tasty and healthy snack or lunch.

A Specialty of Reggio-Emilia Cuisine

There is a savory specialty that best symbolizes the tradition of the peasant culture of Reggio-Emilia and its province: it is the erbazzone, locally known as “scarpazzone” (scarpasòun, in the local dialect). It is a savory pie, closed on the surface, with a filling based mainly on chard and other seasonal herbs, such as spinach. It is enriched with Parmigiano-Reggiano cheese and completed with lard or pancetta. Filling and rich in taste, it arose from the habit of using up the often discarded part of the chard.  However, like other regional recipes with humble origins, such as piadina Romagnola or the Umbrian torta al testo, erbazzone is now appreciated far beyond its territory of origin.

A Short History of Erbazzone

It may be said that erbazzone is the perfect example of the motto  “making a virtue of necessity” in action. Chard stems were often discarded since they are too hard and bitter but instead this ingredient became the main protagonist of the erbazzone recipe.  Erbazzone was prepared in the traditional sol, a round-shaped copper mold with a metal handle. It was an essential cooking utensil and household wood ovens were often built to have enough space for the family sol which could sometimes be up to 24 inches in diameter.

It was customary to prepare erbazzone  for the entire period between June and November since this was the time that chards were in season.

Since erbazzone was historically cooked in the family sol it is traditionally round in shape, but today, it is no longer necessary to be round. It is not uncommon for erbazzone to be rectangular in shape.

Traditionally, erbazzone is prepared by first making the dough which consists of flour, water, salt, and lard. Modern recipes often substitute the lard for olive oil or butter. The dough is separated into two discs that will serve for the top and bottom portion of the erbazzone. Before being baked, the disc of dough covering the cake is pierced with a fork, to prevent it from swelling too much during cooking, and sprinkled with pieces of lard or bacon. Parmigiano-Reggiano cheese is another main ingredient in the erbazzone, which is grated and combined with the chard, giving a boost of flavor to the filling.

As with all the specialties that have been handed down through time, there are many  interpretations and recipes with alternative ingredients. It is therefore not uncommon to come across versions of erbazzone in which spinach, herbs or other wild herbs complement or completely replace the chard. In some cases, however, the filling also includes eggs or ricotta cheese, with the latter contributing to making the mixture creamier, similar to that of stuffed cannelloni.

What are some variations of Erbazzone?

From the plains where Reggio-Emilia is located to the Apennines, erbazzone is enjoyed all throughout its province. The Apennine area has developed a version of erbazzone that consists of a rice filling. From the earliest days, many women would travel down to the valley to work in the rice fields where they were compensated with sacks of rice. Thus, rice found wide popularity as an ingredient in many home-prepared recipes and eventually was incorporated into the erbazzone.  The rice is combined, together with Parmigiano-Reggiano cheese and possibly ricotta and eggs, with the previously blanched and sautéed chard to form a unique and delicious filling.

Like any traditional recipe that has been passed down from generation to generation, every Reggio-Emilia family has its own Erbazzone recipe. It is therefore difficult to identify an “official” recipe. We will provide one that we believe to be quite faithful to the tradition. 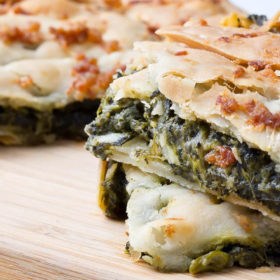 There are two schools of thought with regards to how to best serve the erbazzone. Some prefer to serve the erbazzone hot because the crunchy outer layer contrasts well with the farm filling, whereas others prefer it to be served warm or even cold. In any case, the erbazzone can be served to your liking, and it makes for a great appetizer or main course meal. It is abundantly present on the streets of Reggio Emilia as a quick and easy meal as it’s considered local street food and can be enjoyed in many different settings.