17 Most Common Types Of Rice – A Brief History of Rice 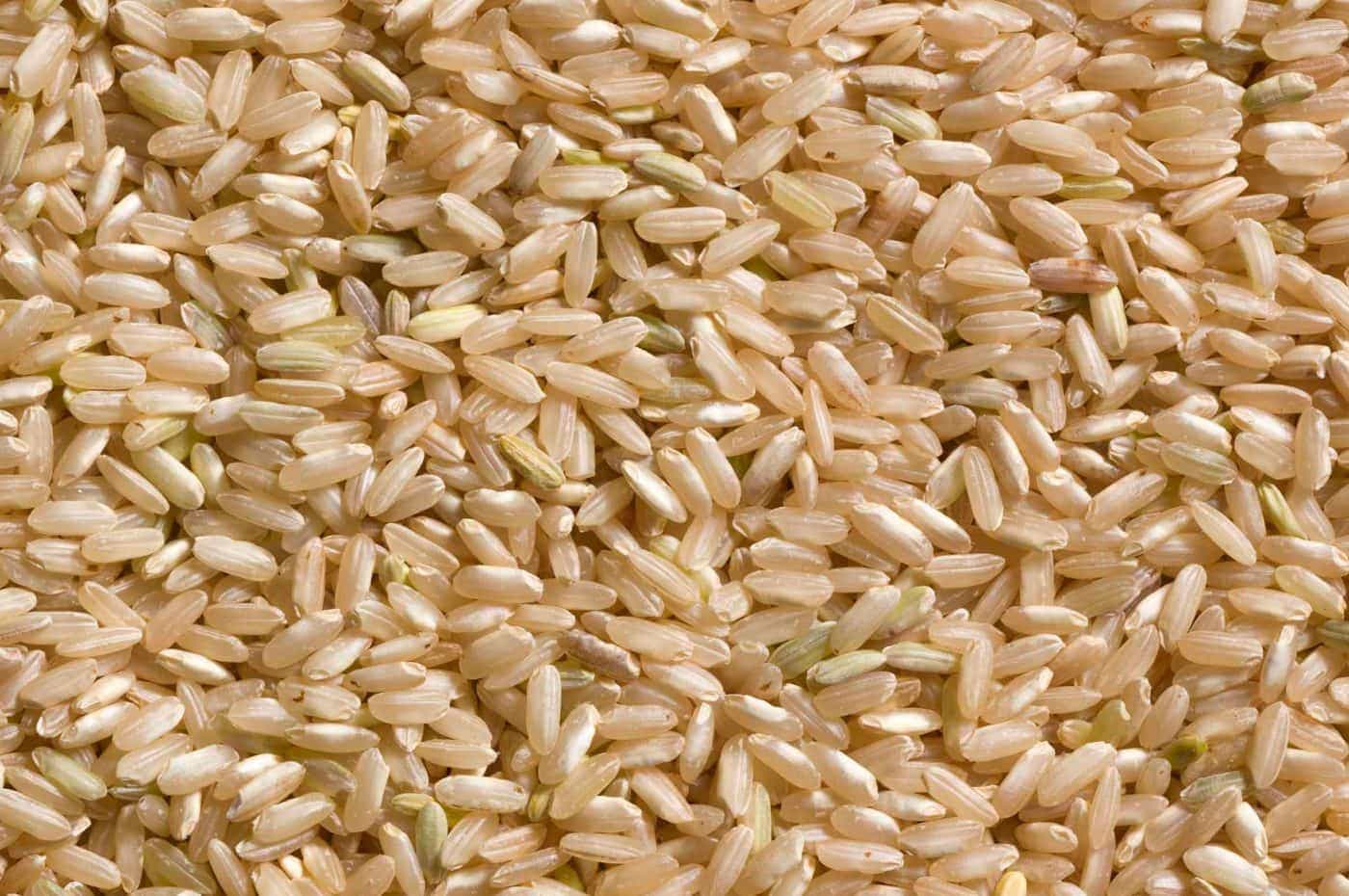 One of my favorite winter comfort foods is risotto , and I love to order it when I’m in Italy. However, since I haven’t found a restaurant in my area that serves a decent one, I either make it myself or ask my kids to make it for me. Risotto is one of the best things about winter, but can equally be enjoyed during the warmer months.

For those of you who don’t know, rice is the seed of oryza sativa , and it’s the most important staple in eastern and southern Asia, the Middle East, and the West Indies. After corn, it’s the most produced grain on earth. When the Arabs colonized northern and western Africa, they introduced rice cultivation.

SOME THINGS TO KNOW ABOUT RICE

THE HISTORY OF RICE BY REGION

Rice was first cultivated in the Yangtze River valley, and archaeologists have discovered how wild rice was finally domesticated and cultivated around 12,000 B.C. Later, two varieties, japonica and indica, were grown in central China. The first time anyone cultivated rice in India was only around 2000 B.C. in Assam and Nepal, where wild rice is still growing and being used.

The first time rice was written about was in the Yajurveda (1500 B.C. onward); there’s a popular Indian idiom that gives advice on how rice should be cooked: “like two brothers, close together but not stuck together.” It’s also a sign of prosperity and fertility, which is probably why it’s often thrown at weddings.

Rice has been cultivated in Africa for about 3,500 years. Between 1500 and 800 B.C., rice propagated from the Niger River Delta (where it was first growing on this continent) to Senegal, but it never really grew further than its original birthplace. African rice disappeared from the scene because Asian rice was planted when the Arabs took over in 500 to 1000 A.D.

Oryza sativa was introduced in the Middle East during the Greek periods (Hellenic and Parthian), and both the Greeks and Romans wrote about it. Just after the birth of Christ, rice was growing in the Po Valley in Italy. With the advent of Islam, people began cultivating rice in the south of Iraq, toward Nisibin, and into the Volga valley. In Israel, rice was growing in the Jordan river around that time. Today, rice is also grown in Yemen.

The Moors brought Asian rice to Spain when they invaded in the 10th century and cultivated it in Valencia and Majorca. Cultivation seems to have stopped after the Christians took back the country, but rice is still grown there today. Rice was cultivated in Sicily when the Arabs were ruling there, and it was growing there long before it was cultivated in Lombardy and Pisa. Arborio rice and Carnaroli rice are also grown in the Piedmont region. Soon after the Renaissance, rice cultivation was introduced in France.

CARIBBEAN ISLANDS AND THE AMERICAS

The Spaniards and Portuguese first planted rice in the Caribbean and South America (Brazil), and it was introduced to Mexico in the 1520s in Veracruz.

17 MOST COMMON TYPES OF RICE

Now let’s look at the most famous rice varieties: 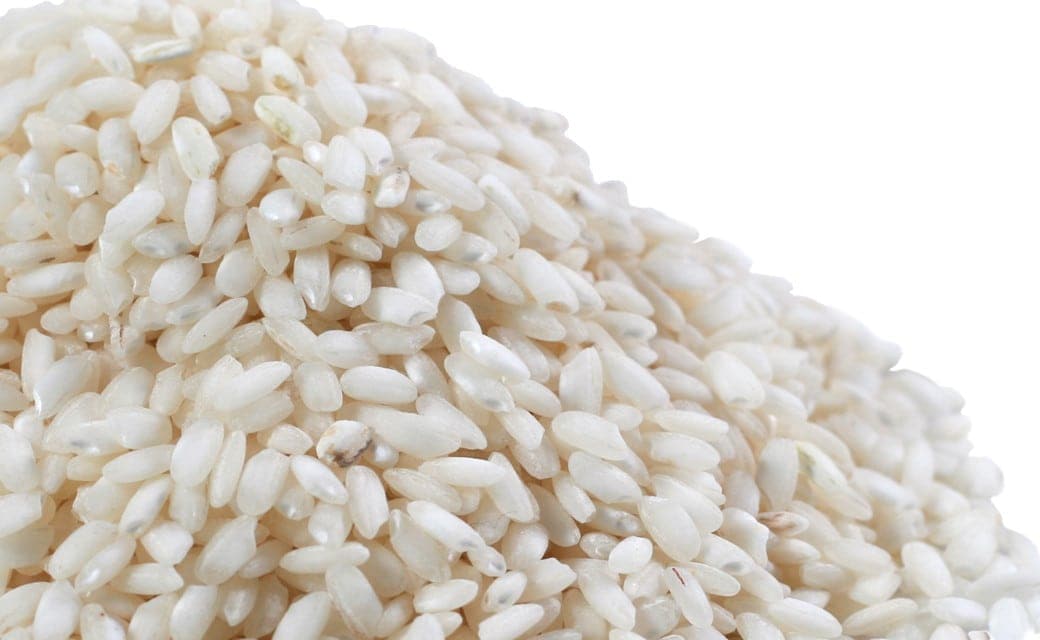 Most commonly used for risotto, arborio rice is a plump Italian short-grain rice with a unique white dot in the middle of the grain. It contains a significant amount of amylopectin, a sticky starch that gives risotto its creamy texture. Arborio rice is a premium rice and it’s usually more expensive than others. 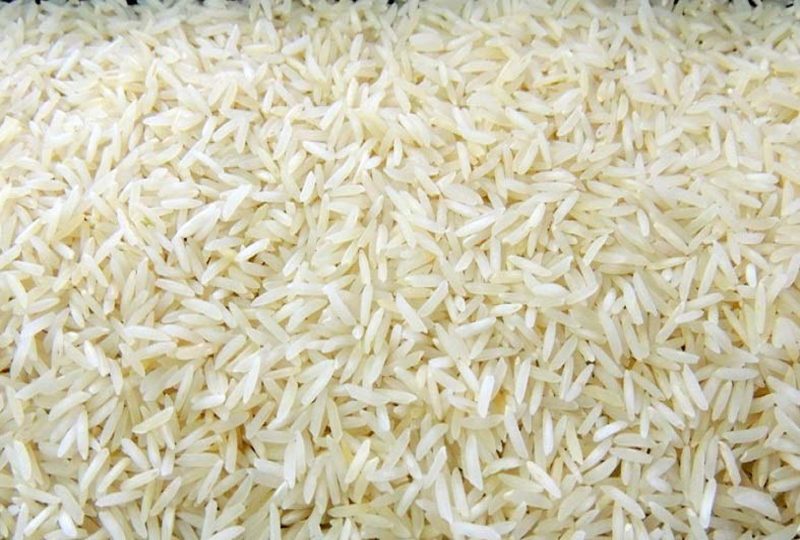 Basmati rice is a fragrant long grain rice grown in India and Pakistan. Aging it for about one year after harvest gives the rice its nutty flavor. Serve it with curry or simple vegetables, but make sure to soak it for at least a half hour before cooking. This rice type is typically used for cooking rice pilaf. 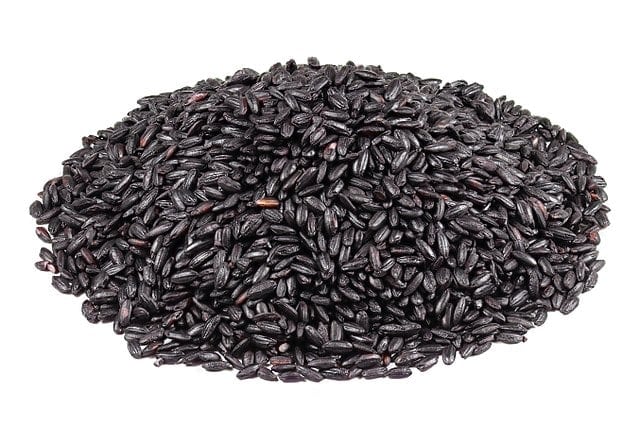 Also called forbidden rice or emperor’s rice, Chinese black rice gets its deep purple color from the antioxidant anthocyanin, which is also found in blueberries and eggplant. This medium grain rice is firm yet tender when cooked, perfect for a pilaf or other side dish. 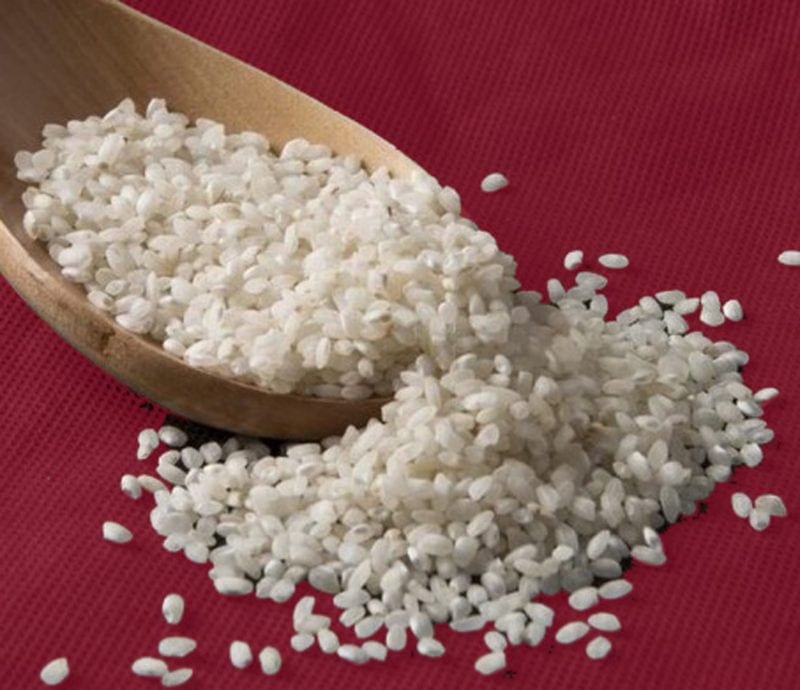 Bomba rice, or Valencia rice is a medium grain variety commonly used in Spanish paella. Although it absorbs more liquid than long grain rice, it doesn’t get sticky like short grain rice. 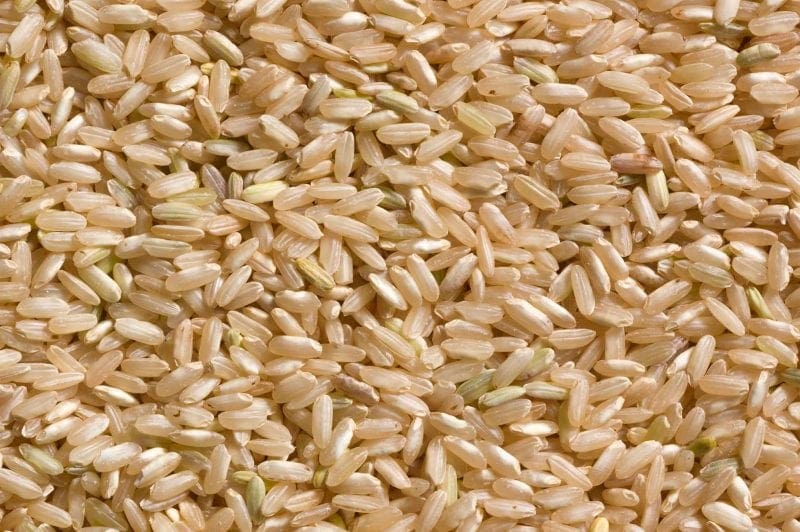 Brown rice has had its husk removed but retains the germ and bran, which are full of vitamins, minerals, and fiber. It takes longer to cook than white rice and has a chewier texture. Available in both short- and long-grain varieties, it can be substituted for white rice in most recipes.

Like arborio, carnaroli rice is most often used for risotto. It is grown in northern Italy and known for its high starch content, firm grains, and creamy texture.

A medium-grain rice variety grown in Portugal, carolino rice maintains a firm yet tender texture when cooked. It also absorbs colors and flavors and is excellent in tomato-based and seafood dishes typical of Portuguese cuisine. 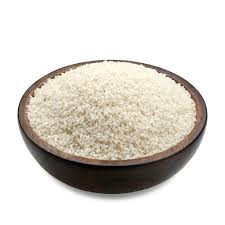 Also known as baby basmati, this medium-grain rice comes from the Bengal region of India. It is best cooked with the pasta method-boiled in a large pot of water and then drained of excess liquid. 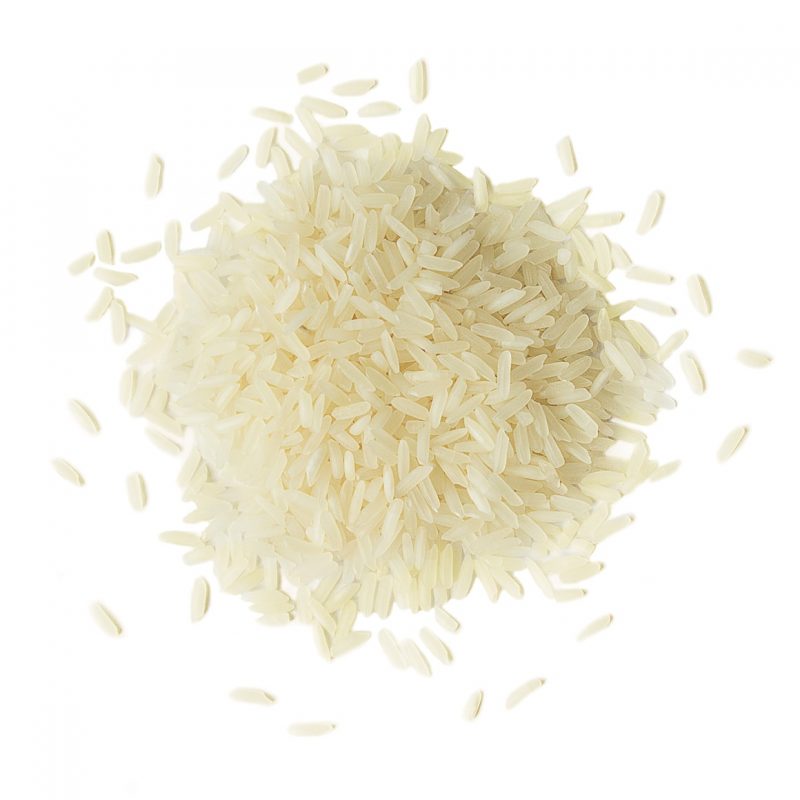 The long, translucent grains of Jasmine rice become soft and sticky when cooked. It originates from Thailand and has a floral aroma that is more subtle than basmati‘s fragrance. Wash before cooking and serve with Southeast asian dishes like fried rice. 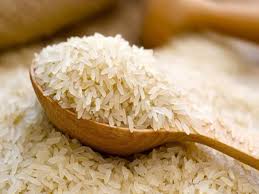 Parboiled rice is popular in some countries. It’s steamed or parboiled while it’s still brown, which allows some nutrients (like thiamine) to enter the grain itself. Parboiling causes gelatinization of the starch in the grain, and the rice becomes less brittle. The color will become more yellowish. Once it has been parboiled, the rice is either dried and milled or used normally. It can also be used as brown rice. It doesn’t stick to the pot when cooked. Nuka, or rice bran, is popular in Japan and other parts of Asia, which is great because then no part of the grain is wasted. 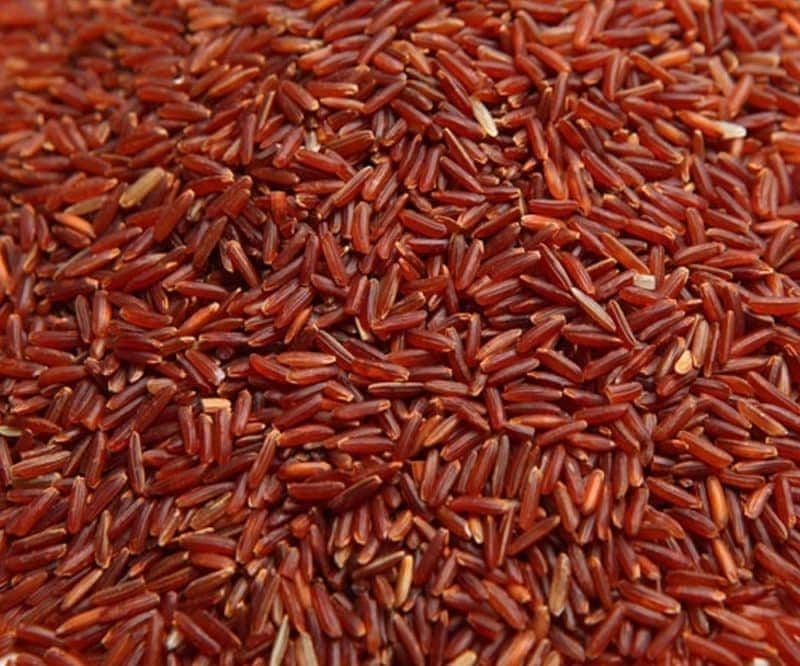 Like brown rice, this long-grain variety from Thailand has only its outer husk removed, giving it a reddish-brown hue and more nutrients than white rice. Its chewy texture and nutty flavor make it an excellent choice for pairing with curries and stir-fries. 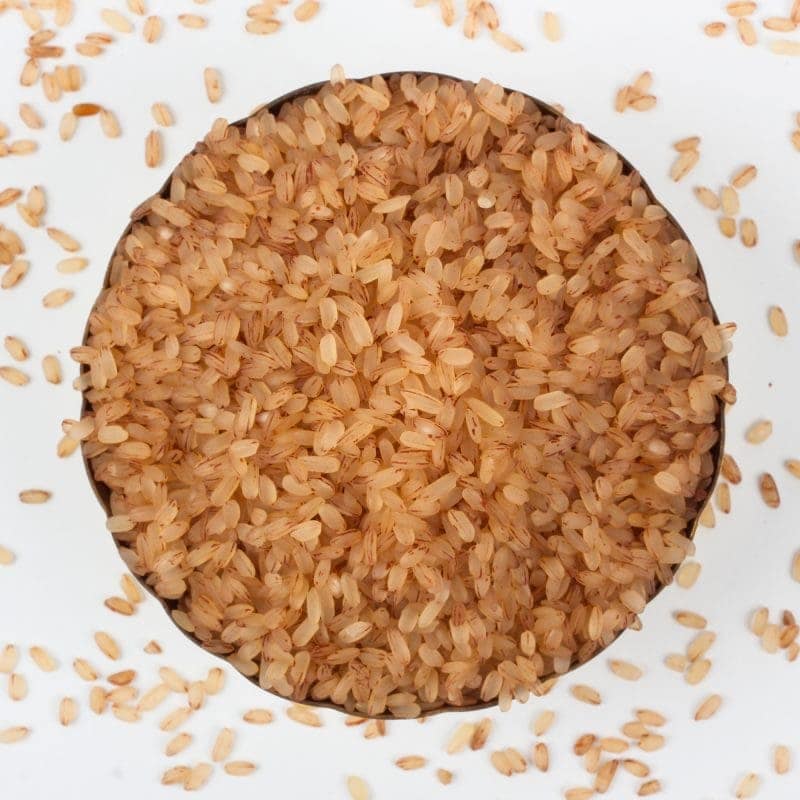 This type of medium grain red rice, rosematta also retains its bran layer, although this variety originates from India. It has a robust earthy flavor perfect for stews, curries, and other meaty dishes. 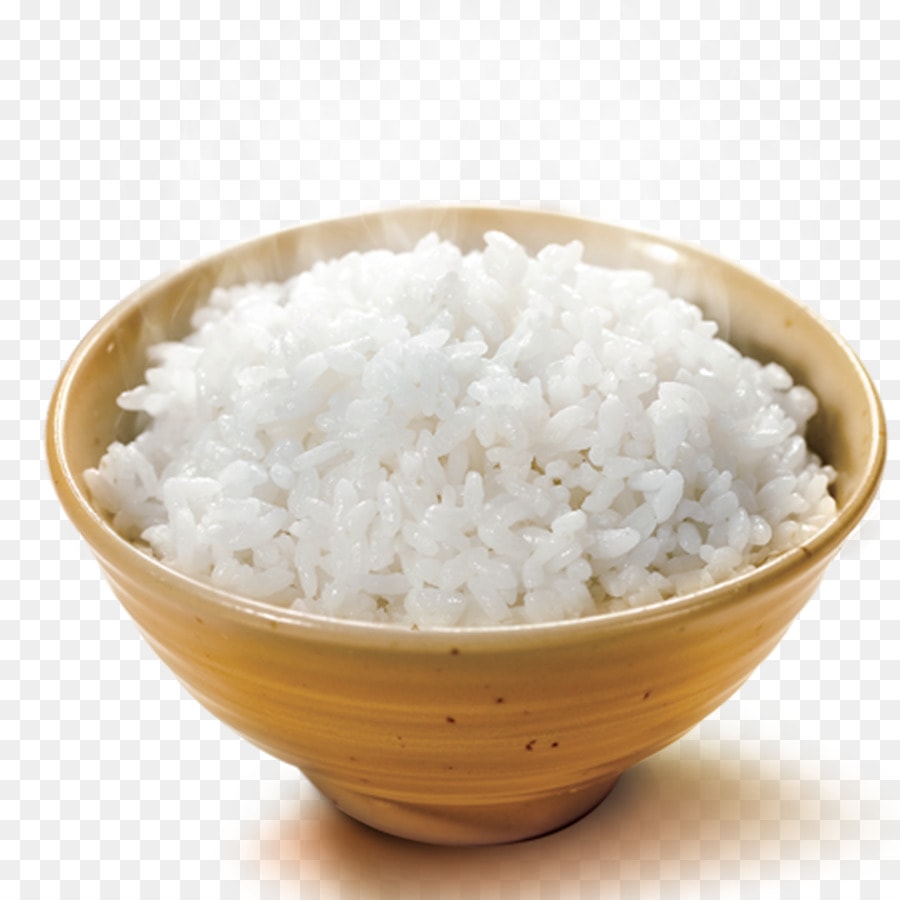 Primarily grown in Southeast and East Asia, sticky rice has a high starch content that results in a sticky, gluey texture when cooked. It is often used for sweet dishes such as rice pudding, and is especially good cooked with coconut milk and served with fresh mango. 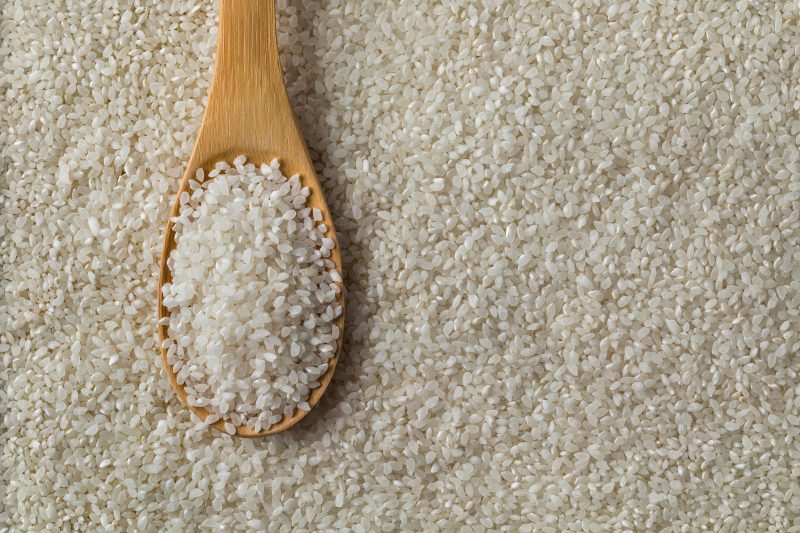 This Japanese rice comes in both white and brown varieties. The translucent grains become firm and sticky when cooked due to a higher starch content, making them ideal for sushi. 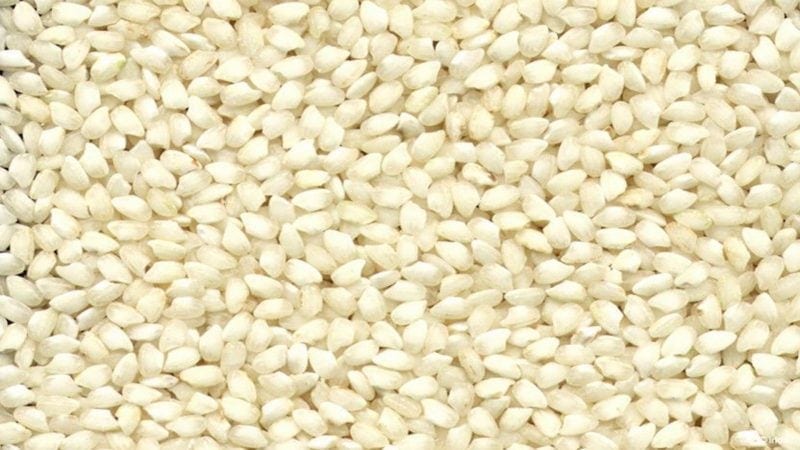 Yet another popular option for risotto, Vialone Nano has been protected by the EU so that it can only be grown within the province of Verona, Italy. It absorbs a lot of liquid for that classic creamy risotto texture yet maintains its shape when cooked. 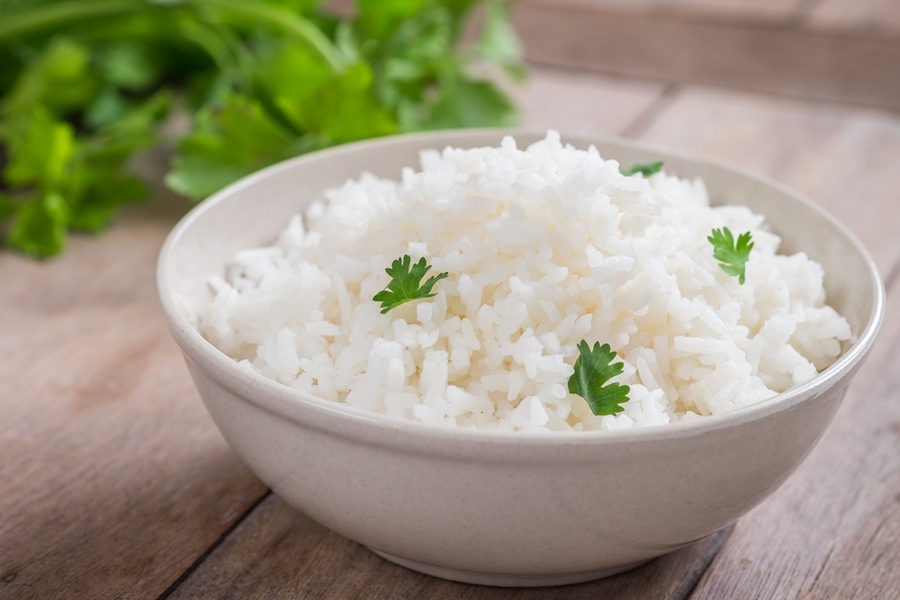 Long-grain white rice is one of the most popular and versatile types available. It is milled to remove the bran and germ, resulting in a less nutritious but fluffier and milder rice. 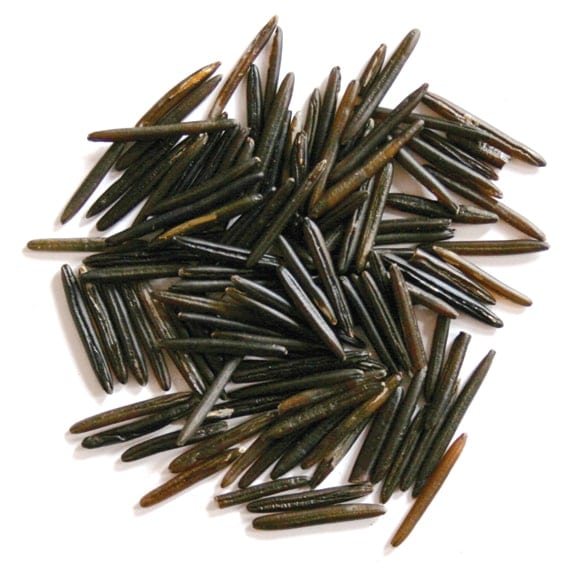 Wild rice actually belongs to an entirely different genus than other varieties. It is the seed of a grass native to the Great Lakes region of the U.S. With a toasty flavor and unique chewy texture, this protein-rich grain is perfect for mushroom soup, casseroles, and pilaf, especially when mixed with one or two other types of rice.