Types of Pepper Guide – History and Facts About the Peppercorn 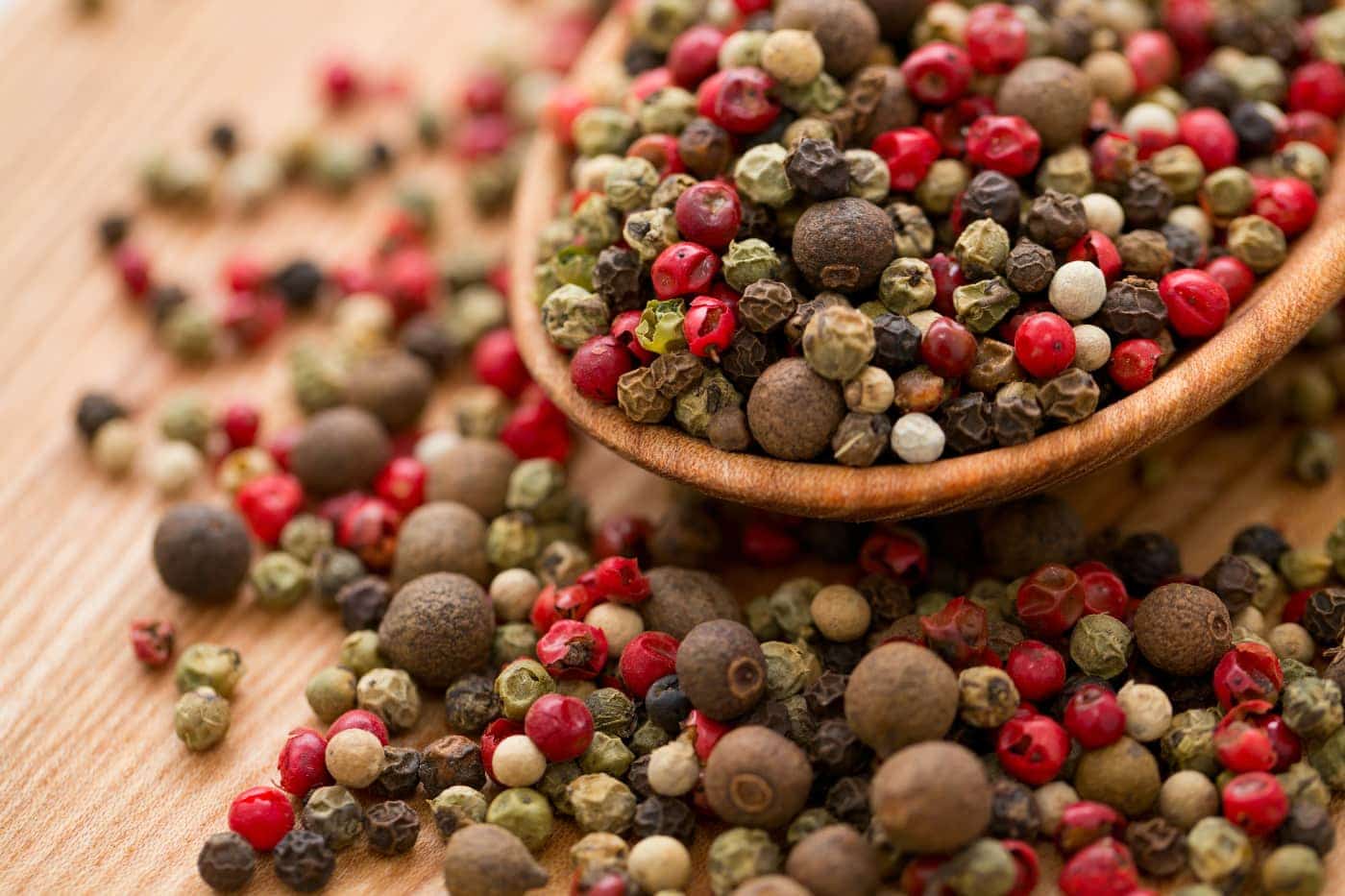 Black pepper originated in the monsoon forests of the Malabar Coast in southwestern India in prehistoric times; it has been used in Indian cooking for over 4,000 years. Egyptians also used the spice in mummification rituals as early as the 1200s B.C. Two thousand years ago, pepper reached Southeast Asia, and it has been grown in Malaysia and Indonesia since that time. Today it also grows in Thailand, Vietnam, China and Sri Lanka.Nomadic Arabian tradesmen introduced pepper, with other spices, to the Phoenicians, who controlled the spice trade in the Western World millennia ago.

Eventually, the Arabs ousted the Phoenicians so that they could monopolize the spice route and increase their profits. But then Alexander arrived on the scene, trounced everyone he laid eyes on, and took over trading with the East. In 150 B.C., the Greek sailor Hippalus discovered how to use the monsoon winds to his advantage and was able to cut the trips to India down from two years to one year.

Roman traders quickly learned from him and, since they had the backing of the powerful Roman Empire, soon became India’s biggest customers. Exotic spices became commonplace in Roman cuisine, but pepper was, without a doubt, the most common.

The Greeks continued to use pepper for medicinal purposes only (with Hippocrates’ blessing), and the Romans obeyed their palates, using every opportunity to include it in their recipes. A famous spice market was held on the Via Piperatica (Pepper Street), and it was probably from this market that pepper found its way to Northern Europe as the Empire grew. Attila the Hun demanded 1.6 tons of the stuff in 408 A.D. as part of a ransom for Rome.

When the Visigoths threatened Rome during the decline, Romans paid them with pepper, among other commodities.Then when Rome fell, pepper exports to the rest of Europe came to a halt, and it wasn’t until the Crusaders opened up new trade routes to deal with the demand that pepper regained its popularity in Europe pretty quickly.

Chefs were thrilled, and merchants and traders had to find ways to satisfy the market. And then Venice came into the picture. Venetian merchants controlled the trade for centuries. At one point over 275,000 tons were consumed by Europeans, until the Venetians were shortsighted enough to increase the price too much, forcing their customers to find other ways of importing it.

The Portuguese were the first to take over when Vasco da Gama found a route to the west coast of India via South Africa, but the Portuguese merchants were equally greedy and didn’t offer Europeans cheaper prices. The Dutch formed the Dutch East India Company, but they were the greediest of the lot, and it was only when the British and the French entered the fray and formed their own East India Companies that the price of pepper finally came down.

Vasco da Gama wasn’t the only person to try and find a new route to the East, though; Christopher Columbus also tried, but his compass was a bit off kilter, and he found America and chillies instead. For some reason, known only to himself, he called them peppers.

THE LARGEST PRODUCER OF PEPPER IN THE WORLD

India is the largest producer of pepper in the world, producing 50% of all pepper. The best pepper still comes from the monsoon forests of Kerala, on the Malabar Coast, and two of its celebrated varieties are Malabar Garbled and Tellichery Extra bold. The word “pepper” is derived from the Sanskrit word pippali or pippalii, which became the Greek word péperi and then the Latin piper.

Some interesting facts about pepper:

Black pepper is very hot and pungent, white pepper is less so, and green pepper is the mildest of the lot with a clean, fresh taste. The hotness scales are 8, 7, and 3, respectively. It’s best to buy peppercorns whole and grind them at home; peppercorns keep their flavor indefinitely as long as you only grind them just before use. Ground pepper loses its flavor and aroma over time. For those who love steaks with green pepper sauce, dried green peppercorns can be reconstituted for mashing into a paste by soaking in water. All spices should be stored in airtight containers out of sunlight. 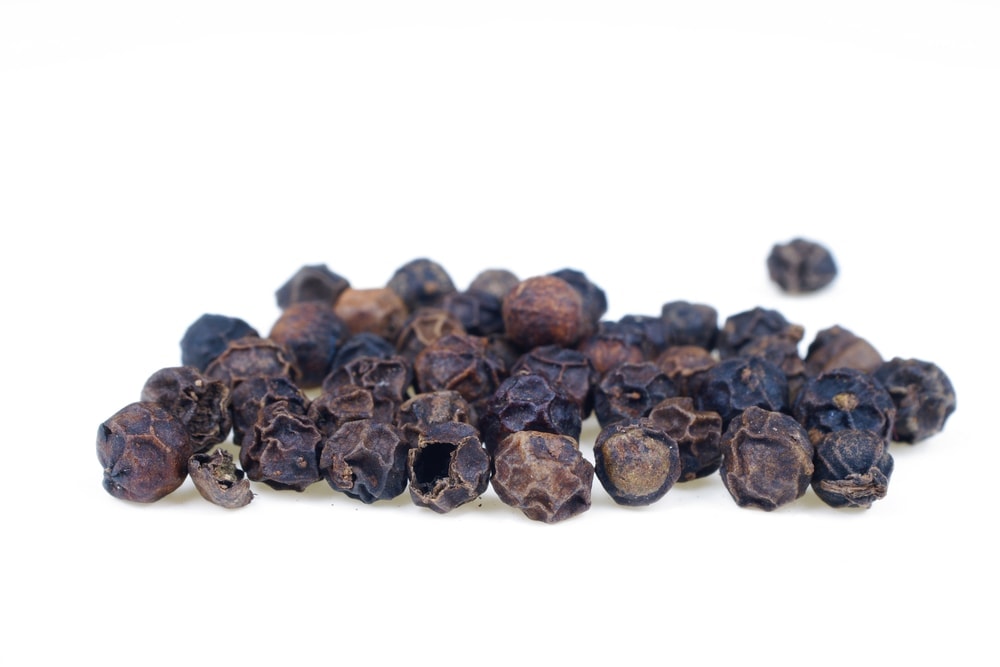 Black pepper is the dried, unripe berry of several species of a vinous plant. The berries are wrinkled, spherical, and about 5 mm in diameter. The best varieties on earth are the Malabar and Tellicherry pepper — only 10% of the largest peppercorns are graded as Tellicherry. 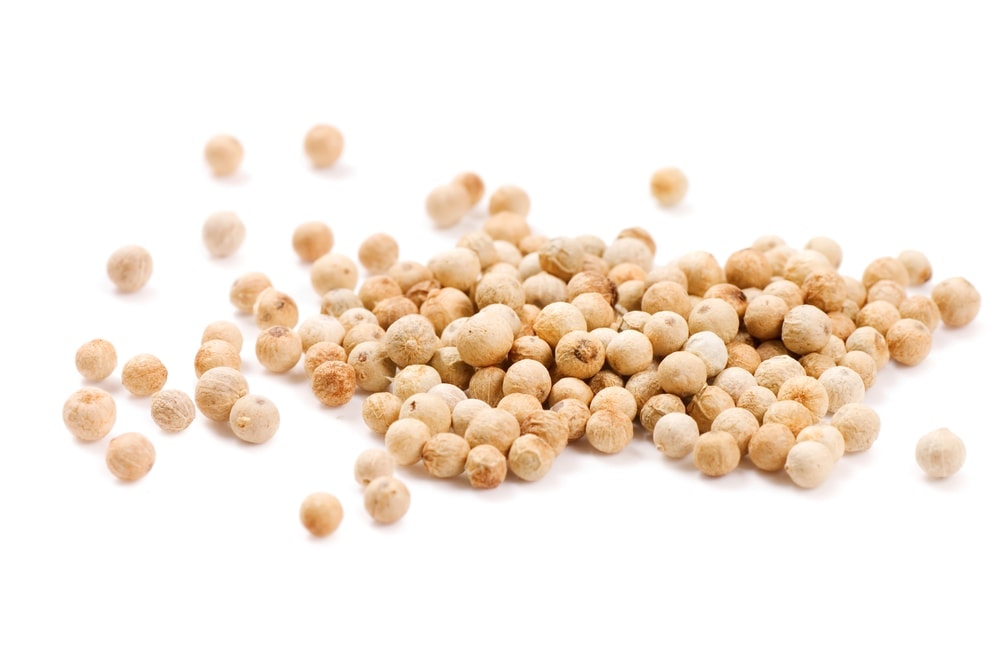 White pepper begins the same way as black pepper, but the berries are allowed to ripen on the vine a little longer. The outer shell is removed by soaking the berries in water until the shell falls off, thus yielding a whiter, cleaner pepper. White pepper has an earthy aroma and a less pungent flavor than black pepper. It is often used in white sauces and other light-colored foods. 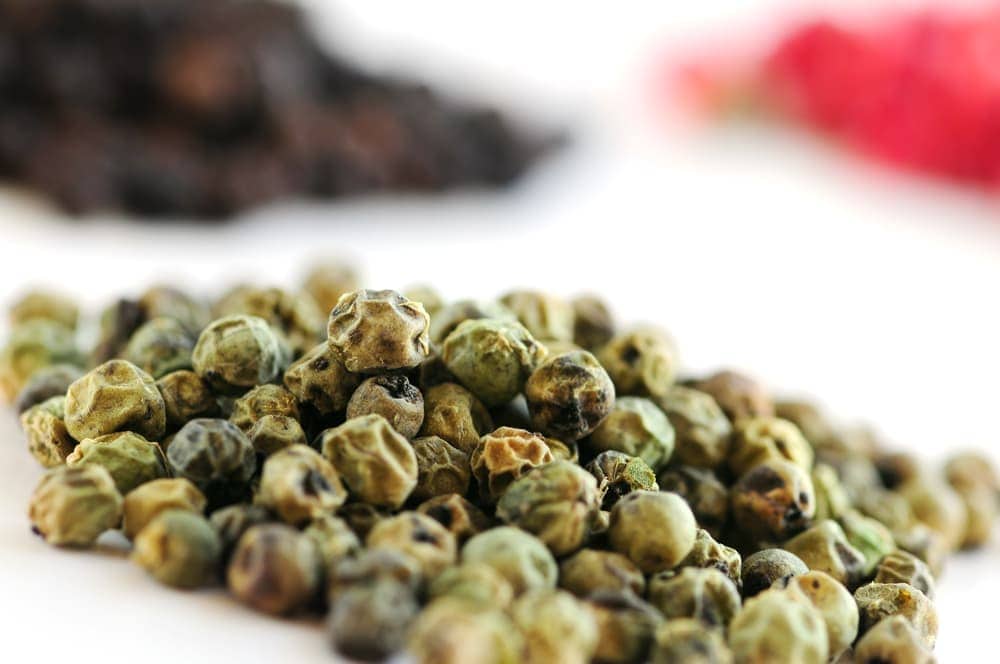 Again, green pepper is from the same fruit but is picked before the berries mature. Green peppercorns are quickly dehydrated rather than sun-dried to preserve their mildly spicy flavor and bright green color. Alternatively, the fresh peppercorns can be packed in brine; these are common in French cooking, especially for steak au poivre. 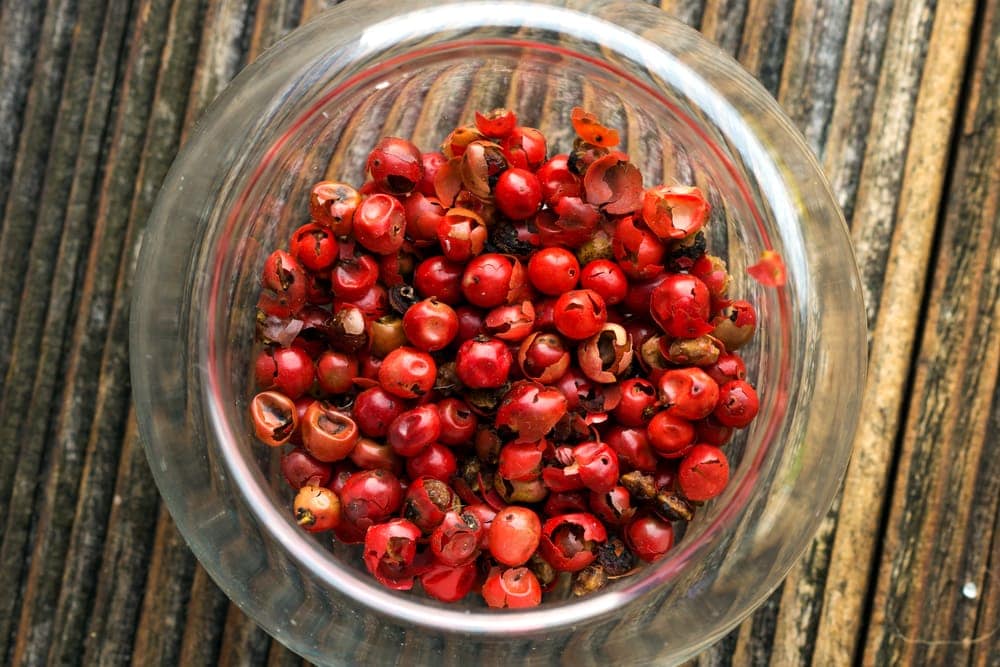 Less common is red pepper, not to be confused with cayenne. Unlike the other varieties, these peppercorns are left to fully mature on the vine. Fresh red peppercorns spoil quickly and can be preserved in brine, freeze-dried, or air-dried. 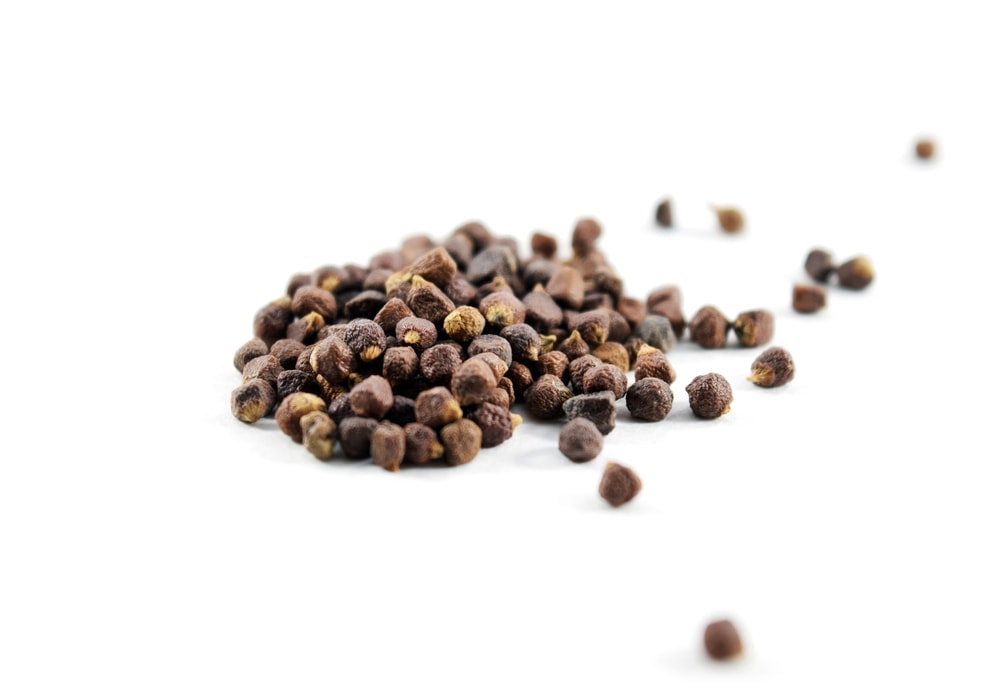 Melegueta pepper (Aframomum melegueta) is an aromatic, spicy berry with a strong ginger and cardamom flavor. It is a 5 on the hotness scale and is native to tropical West Africa, growing mainly in Ghana; it’s almost unknown in modern Western cuisine. It was used in Europe during the Middle Ages and the Renaissance; it was even used to flavor the old wine known as Hippocras. Today it’s still used in the production of beer, wine, and various spirits. Melegueta pepper was known as Grains of Paradise, but there are, in fact, two spices: melegueta pepper and the true Grains of Paradise (Aframomum granum paradise).

The Grain Coast of West Africa is also named for the spice (like the Ivory, Gold and Slave Coasts). Melegueta pepper was originally transported across the Sahara by caravan because it was popular in Europe during the reign of Elizabeth I, who adored it, and used until the reign of George III. Trade began to decline to the extent that only the Scandinavians use it today.

The berry is a small, reddish-brown, irregular seed from a cardamom-like plant. It comes from an auburn, wrinkled, fig-shaped pod about 1 inch in length with a white kernel. It is milled as ordinary peppercorns are and can be used as a substitute for pepper in centers of local production. Use is generally confined to West African cuisine and occasionally in Moroccan ras el hanout recipes. It was used in some ancient recipes, but nowadays ordinary black pepper combined with ginger is often used as a substitute. Today the seeds are used to flavor aquavit in Scandinavian countries and can be chewed to sweeten breath. 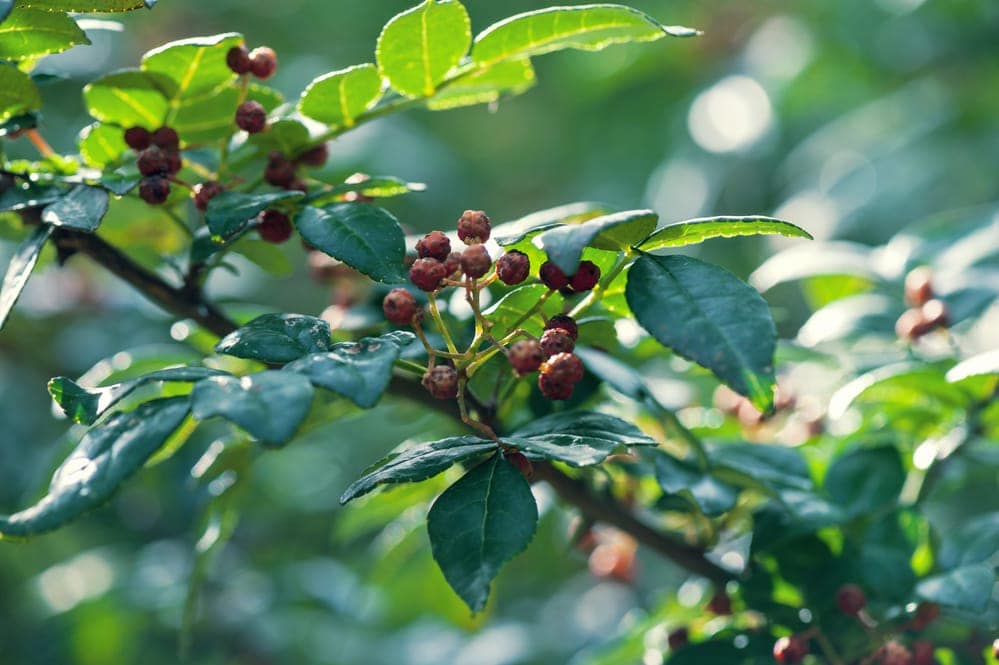 This black pepper makes up for its mild flavor with a brash, nose-clearing heat. Use it in spice blends for some extra bite or in dishes where you don’t want the pepper flavor to linger. Some tasters suggest that it has notes of herbs and citrus. 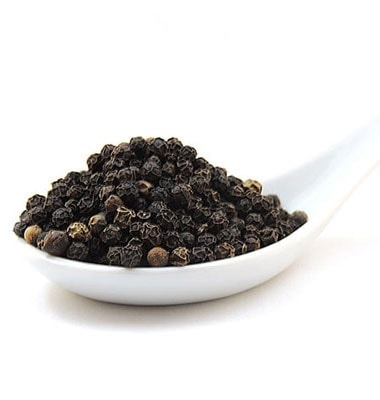 This Indonesian black pepper from the island of Sumatra has an earthy, smoky aroma with a citrusy slow burn. It’s the most common variety in the UK. Being slightly smaller than other varieties, Lampong peppercorns grind well in most pepper mills. This type is an excellent seasoning for steak. 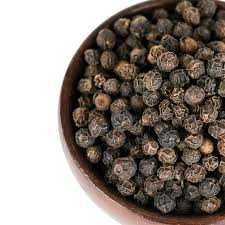 One of the highest quality pepper varieties, Malabar originates from the region of the same name in southwestern India. Pepper cultivation began on the Malabar Coast, making this variety also one of the oldest. The greenish peppercorns have a “classic” pepper taste with their robust flavor and pungent aroma. 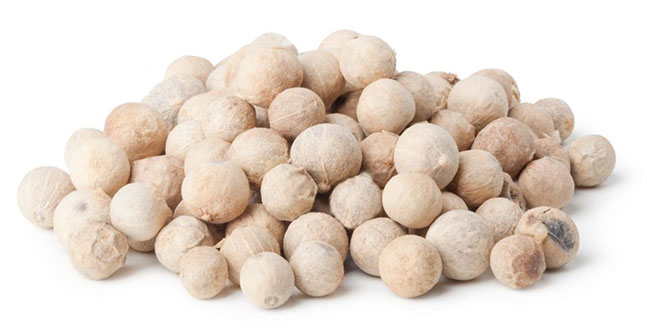 The most popular white pepper variety, Muntok is named after the main port on the small Indonesian island of Bangka, where it is grown. It is not only commonly available but also often preferred over rarer specialty varieties. 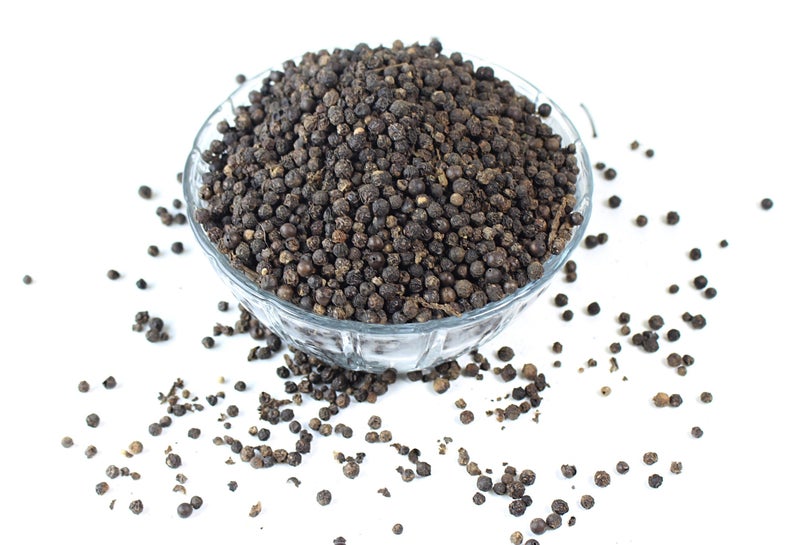 Penja black pepper has a rich, pungent aroma with a hint of cumin. The equally pungent flavor of these smaller, dark brown to black peppercorns has a high heat that comes on quickly. Similarly, Penja white pepper is one of the hottest white varieties. Both grow in Cameroon’s Penja Valley, where pepper has only been cultivated for about 60 years. Almost all Penja pepper is shipped to France. 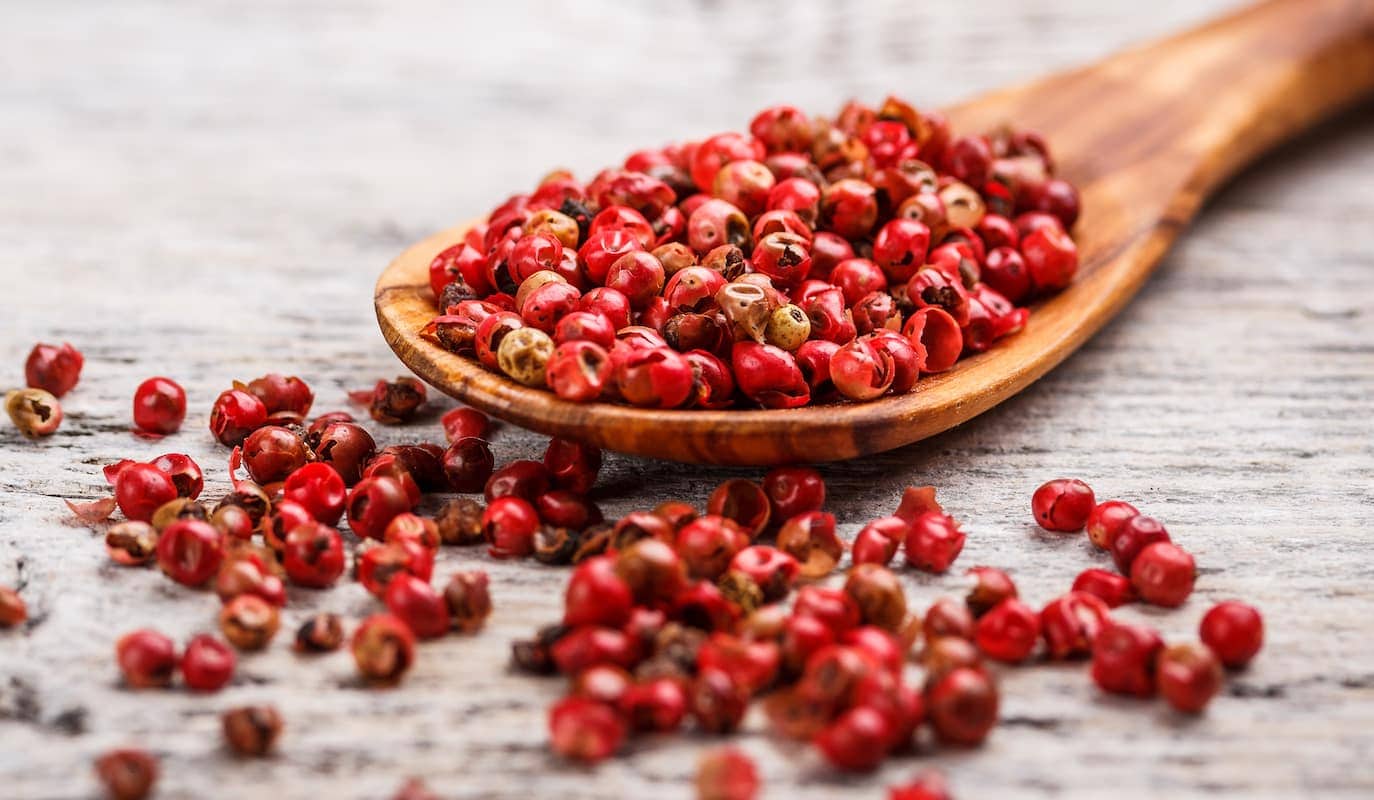 Pink pepper isn’t a true pepper but comes from the French island of Reunion. The peppercorns have a brittle, papery pink skin enclosing a hard, irregular seed that’s much smaller than the whole fruit. They are typically used whole or mixed with other varieties, and they have a mild, acidic, lightly sweet flavor. 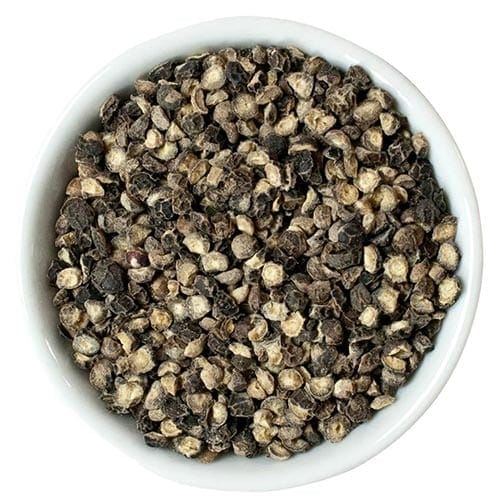 This Malaysian pepper is available in both black and white varieties. Sarawak black pepper has a mild flavor and fresh, fruity aroma with hints of licorice and chocolate. The white peppercorns, on the other hand, are large, creamy white, flavorful, and hot. 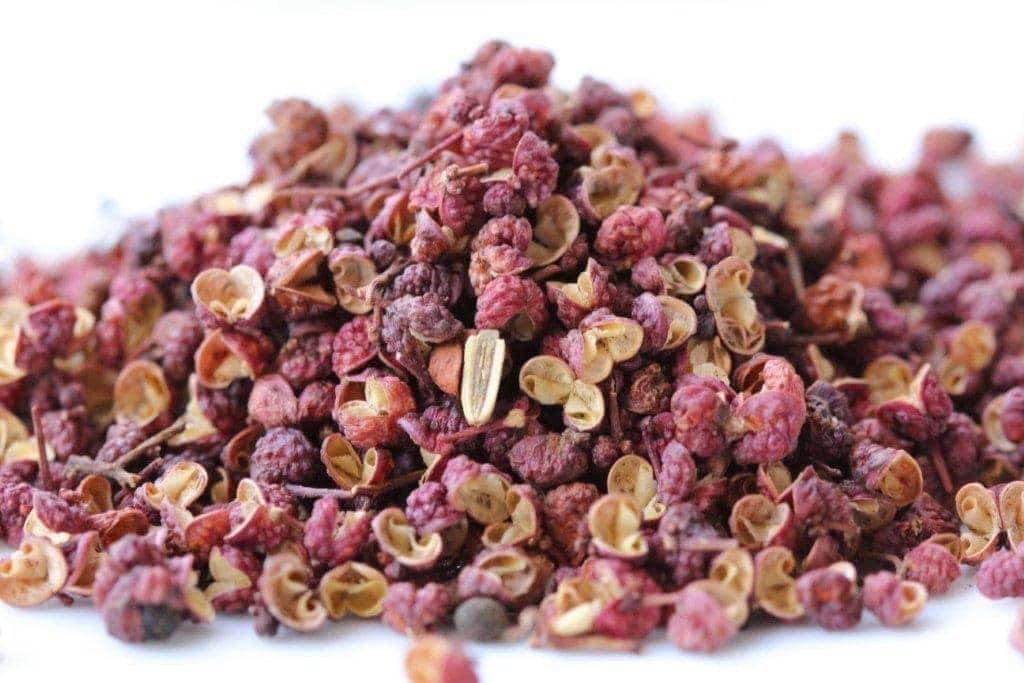 These are hot, peppery berries with a citrus fragrance and milder, more lemony tasting leaves that are carminative and mildly antispasmodic. The berries must be roasted gently before use and preferably crushed with a pestle and mortar or, if you have to, an electric grinder. If you need a really fine grind, use a sieve. They grow in the Sichuan province of China, and even though the berries look like black peppercorns, the plant doesn’t belong to the pepper family but is a tree belonging to the rue family.

The rust-colored berries have hair-thin stems and open ends. Once the berries dry, they look like tiny nuts and are about 4 millimeters in diameter. When the skin splits open, a little black seed pops out; actually, the spice consists mainly of the empty husk! It’s very popular in Japan, where the ground dried leaves are known as sansho and the whole leaves as kinome (usually fresh, vacuum packed, or pickled). It’s also beloved in Tibet, especially when making the famous, delicious national dish, momos. When salt and Sichuan pepper are roasted and browned in a wok and served as a condiment with chicken, duck, or pork, it is known locally as hua jiao yen. 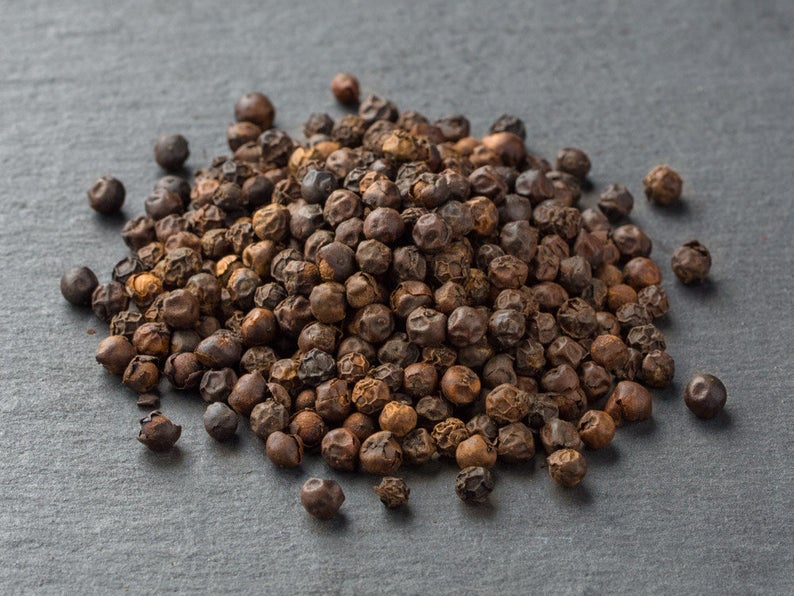 Grown on the Malabar Coast in southwestern India, Tellicherry pepper is the most popular variety. The large, high-quality berries are picked when almost fully ripe, and their yellow-orange or red color becomes dark brown or black when processed into peppercorns. Tellicherry peppercorns have a complex, spicy flavor with hints of cherry, cedar, and flowers, though they lack the pungency of other varieties. 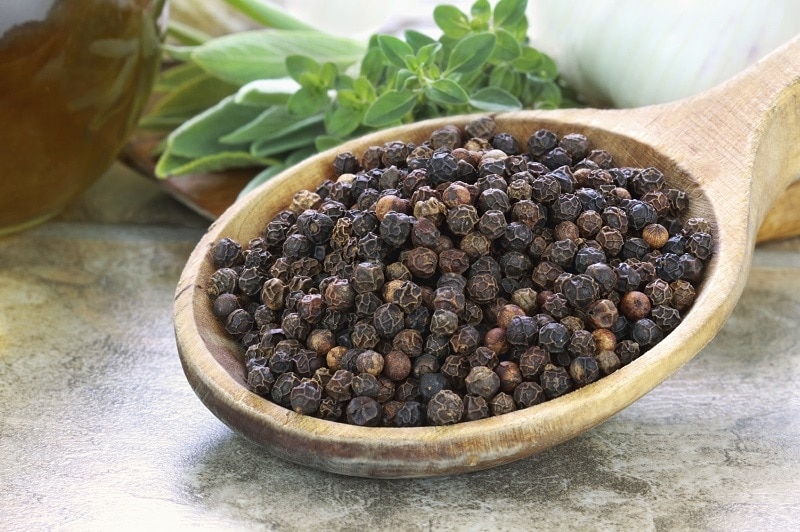 This versatile variety features large peppercorns with a strong citrus aroma. Interestingly, it has a milder flavor with notes of smoke, wood, and black tea. Pair it with Brazilian pepper for a good flavor and heat combination.