Piadina, or la piada, pieda, la pida, or piè, according to local dialects, is an Italian flatbread made from wheat flour typical of Romagna and the upper part of the Marche region, in particular in the Italian provinces of Ravenna, Forlì-Cesena, Rimini, and Pesaro and Urbino including San Marino.

Piadina looks like a thin, flattened, circular sheet and is eaten in slices or whole and stuffed to taste: cold meats, cheeses, and vegetables or jam, honey, or spreadable chocolate, like Nutella.

The two main variants of piadina

Piadina Romagnola has very ancient origins. It comes from a poor and simple peasant tradition, but over the years, it has appeared on the tables of many gourmets and has achieved worldwide fame.

Currently, piadina is registered in the list of traditional Italian agri-food products (PAT) of the Emilia-Romagna region. In 2003, some associations for the promotion and protection of the Romagna piadina requested PGI certification for the two variants of this product: Piadina Terre di Romagna and Piadina Romagnola di Rimini.

The differences between the two piadina variants above concern the size: traditionally, the piadina prepared along the coast (in the area between Riccione and Rimini) is thinner and wider than that consumed inland (e.g. in the Cesena and Forlì area). In further contrast, the piadina in the Pesaro area is often prepared as a puffed version, which is even tastier because it is fatter and made strictly with lard.

Piadina is the quintessential street food of Romagna. In fact, you can’t travel through Romagna without noticing the famous and characteristic chioschi, small shacks like the one pictured below, where piadina is made and sold mostly by women called piadinare.

History and origins of the Italian flatbread from Romagna

The first to cook a rudimentary version of piadina were the Etruscans, who were the pioneers in the cultivation and processing of cereals and therefore in the production of sfarinate, which closely resembles modern-day piadina. Both are prepared without yeast and cooked on a metal or stone plate.

Sfarinate, the rudimentary piade, continued to be also produced in ancient Rome, where they represented food for the rich, because they had to be eaten freshly cooked; already after a few hours, in fact, they became hard and unchewable. Therefore, they were not suitable for plebeians who, on the other hand, needed food that could be kept for a long time.

In the Middle Ages, there was an inversion of roles, so to speak: given that all the leavened products were the domain and exclusive preserve of the rich, simple piadinas produced without yeast and with less valuable flours, such as barley, became the food of the poor.

As cooking schools were born and gastronomy became a real art, the piadina was relegated to the corner of poor food. It was considered a “rude bread,” widespread only among the less wealthy classes who also added acorns and dried legumes to its dough to make it as nourishing and satiating as possible.

During the twentieth century, the piadina flatbread experienced its period of resurgence, initially spreading over all the Romagna tables. Then it became a street food, prepared and cooked to order in kiosks along the Adriatic coast, and therefore, thanks to tourists, it gained international fame as early as the 1950s. 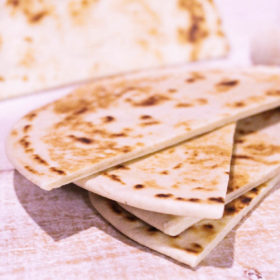 Piadina is traditionally eaten with salumi (cured meats) like salami, but you can also use prosciutto, coppa, or something similar. It is also very common to serve piadina with a very soft, young cheese traditionally from Romagna, called stracchino, which is spread on the surface of the piadina and served with arugula on top. Some others like to combine mozzarella cheese, fresh tomato, extra virgin olive oil and oregano. Una bontà!

Also very common in Romagna are the crescioni, or cassoni. Similar to a calzone but made with piadina dough. The most common fillings are spinach, sausage and onion, pumpkin and potato, mozzarella cheese and tomato, Nutella (which I love) and many others.