What is gnocco fritto?

Gnocco fritto is a delicious appetizer typical of Emilia Romagna. It is a fried bread made from flour, water, yeast, and lard and usually accompanied by cold cuts or cheeses or served plain.

Soft, puffy, and tasty, this fried dumpling is a specialty with unmatched goodness. It seems to have been handed down to the Emilians by the Lombards during their domination, and depending on the area of the Emilia region, it takes on a different name: In the Modena and Reggio-Emilia areas, it is simply called gnocco fritto (al gnòc frétt, in dialect); in the Bologna area, it takes the name of crescentina; in the province of Ferrara, pinzino; in Parma, torta fritta; and in Piacentino, chisulén.

How to prepare gnocco fritto

Like with any traditional recipe, there are several versions of gnocco fritto. Some prepare gnocco fritto without lard, and others even prefer baked gnocco for a lighter version.

The recipe below is the original Emilian gnocco fritto recipe as tradition dictates. It is a very easy preparation kneaded by hand without any use of a mixer. Just prepare a pre-dough batter and let it rise, which will result in a light and digestible product, then knead in additional flour and the lard. If you prefer a lighter version, you can replace the lard with butter or extra-virgin olive oil. After the dough has risen a second time, roll it out, cut the gnocchi into rhombuses or squares, and then fry them.

How to serve gnocco fritto

Perfect as an appetizer, gnocco fritto is usually stuffed with Italian cheeses and cold cuts. It is usually served with the delicious cured meats of its area of origin, such as prosciutto crudo di Parma, salame Felino, coppa Piacentina, and the delicious Culatello di Zibello, just to name a few.

But it is also perfect to serve instead of baked bread, a bit like the Neapolitan zeppole di pasta cresciuta. 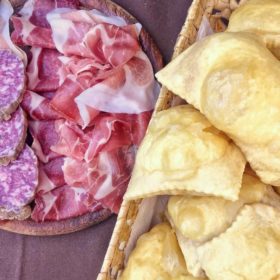 How to make fried dumplings

How to cook gnocco fritto

Liked this recipe?Follow us NonnaBox for more!
288 shares