Farinata is a humble dish with chickpea flour as its main ingredient. It is used as an alternative to bread, and although it’s originally from Liguria, it is now counted among the most famous street foods in all Italy.

The origins of farinata ligure: between legend and history

The origins of farinata are lost in the mists of time.

Some trace the birth of the dish to Roman troops: since wheat flour was a luxury that soldiers could not afford, they prepared a mixture of chickpea flour and water, which they then cooked in the sun, using their shields as ovens.

Others pass on the legend that farinata was born out of mere chance in 1284, during the battle of Meloria, in which the maritime republic of Genoa defeated that of Pisa. The Genoan ships were pushed by the wind and oarsmen, who were often fed with chickpea soup.

It is said that during the crossing of the Bay of Biscay, one of these boats encountered a strong storm that flooded the hold, soaking the chickpeas and spilling barrels of oil. When the sailors entered the hold, they found the floor strewn with chickpea mush.

Because supplies were scarce, the mush was given to the captive Tuscan rowers; some devoured it, while others refused to eat it and left the bowls on the tables under the sun. But the next day, exhausted from hunger, they went to take back their bowls and noticed that the sun had transformed the mush into a sort of pancake, or focaccetta — much more palatable!

The Genoese, once back on land, perfected their discovery by cooking the mixture in the oven and calling it, to taunt the Pisans, the gold of Pisa. Only later did it take the name of farinata.

Legend or reality, farinata is one of the typical and most appreciated dishes of Ligurian cuisine. In the past, farinata, or faina de ceixi, as they call it in Genoa, was consumed on November 1 and on New Year’s Eve, and it was cooked exclusively in wood-fired ovens particularly common in the port area of ​​the city.

Different names and numerous variations of farinata spread throughout the maritime area between the Maremma and the French Riviera.

In Liguria, especially in the province of Imperia, it is common to place onions on top of the farinata before it is put in the oven.

Also in Liguria, but in the Savona area, the farinata bianca variation is widespread, and it takes its name from the wheat flour used to make it.

Sometimes farinata is mistakenly confused with panissa, also of Ligurian origin, which is made without olive oil and is cooked on the pan, not in the oven. Panissa is generally served warm, cut into cubes, and seasoned with oil and lemon.

In Tuscany there is cecina, served simply with a sprinkle of pepper, combined with soft cheeses, or eaten in a sandwich.

Farinata is traditionally cooked in a tin-plated copper pan called a testo, which has very high electrical and thermal conductivity and allows you to cook the farinata uniformly, creating a crisp and golden surface that gives it a unique flavor. The copper pan is round, flat, and heavy, and it is said that it took its shape and name from the Saracen shield, which in Arabic is called a testo. 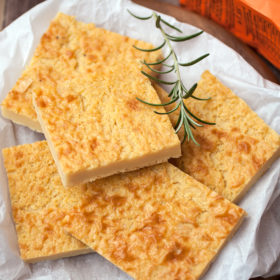 Farinata is one of the most famous Ligurian recipes, easy to make and so simple in its ingredients that everyone can try its amazing flavor.
4.73 from 11 votes
Print Pin Rate Save Recipe Recipe Saved!
Course: Antipasto
Prep Time: 10 minutes
Cook Time: 30 minutes
Total Time: 4 hours 40 minutes
Servings: 4 people
Calories: 768kcal
Author: Nonna Box

Dynamic and full of fruity aromas — and even subtle flavors of almond — a smooth and bold Pigato, a typical white wine from Liguria, pairs perfectly with farinata. But this is a recipe you can have fun with when it comes to wine selection, so if you’re feeling adventurous, try other Italian whites such as a dry, citrus fruit-scented Grillo of Sicily, or a full-bodied Greco di Tufo from Campania.