The Unexpected Truth About What Is Salami Made Of

Quick Navigation show
1 WHAT IS SALAMI?
2 THE DIFFERENT TYPES OF SALAMI
2.1 Cacciatore
2.2 Capocollo/Capicola
2.3 Genoa salami
2.4 Lardo
2.5 Napoletano
2.6 Pancetta
2.7 Prosciutto
2.8 Soppressata
3 WHAT IS SALAMI MADE OF?
4 DOES SALAMI NEED TO BE COOKED?
5 HOW DO YOU PREPARE SALAMI?
6 HOW DO YOU SERVE SALAMI?

What is salami, you ask? Well, salami (Or salame, as it’s called in Italy) has been around pretty much since forever. Okay, maybe not quite forever, but it is believed that its history dates back even before ancient Rome.

Despite the age, however, commercialism tried to tarnish its reputation—as it always happens.

You see, what started as an Italian sausage tradition, is now a waxy disc in a plastic foil, put on pizzas and sandwiches. It’s still called salami, but the supermarket version is nowhere near what’s supposed to be.

So you wanna know more about what is salami? Simply put, salami is everything. No, seriously—it’s a generic term referring to any sort of encased meat.

The word Salame has Latin origins (“Salumen”) meaning exactly that—a combination of salted meats, instead of a particular type of meat.

And because salami is so broad, it’s no surprise that it can be prepared in many different ways, despite each type going more or less go through the same processing phases.

The difference is mainly in terms of spice mix, but also the ground meat which can vary in consistency from salami to salami.

THE DIFFERENT TYPES OF SALAMI

Now you know a bit about what is salami, are you still a tad confused? Well, when most people hear the word “salami” they usually just simply think “Italian sausage.”

Well, we may not be able to enumerate all of them, but below are some of the quite well-known ones. 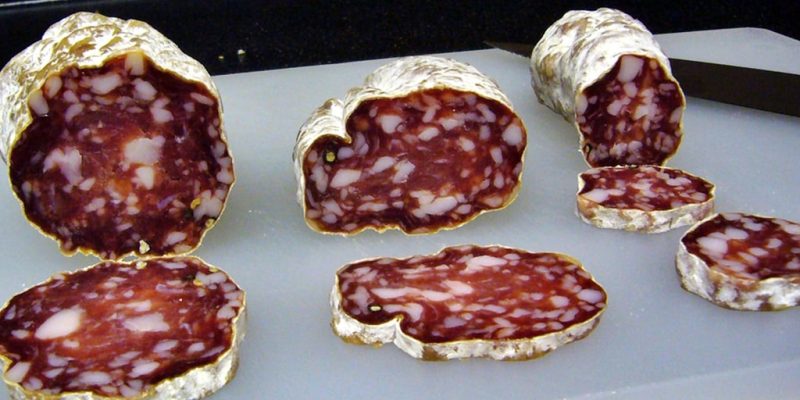 Literally meaning “hunter style” in Italian, this sausage is smaller in size than other salame, which means it is portable enough to be consumed on-the-go. It is made with ground pork and a variety of herbs and spices for flavor. 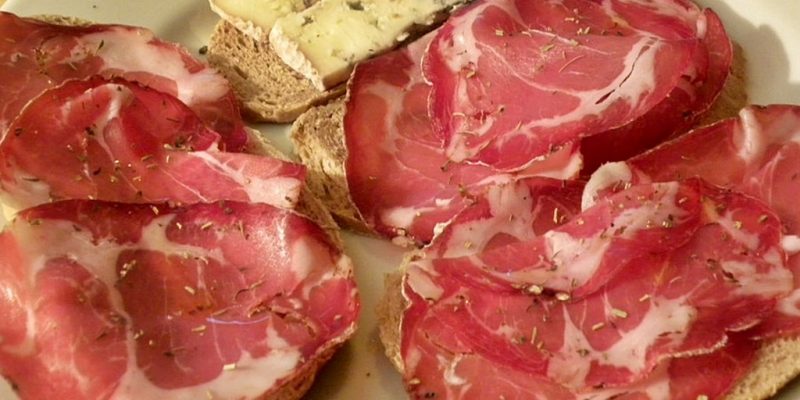 Made with the head or neck parts of the pig, it is usually smoked and treated with spices and herbs, and sometimes even wine. It typically has a tender texture and be great for sandwiches. 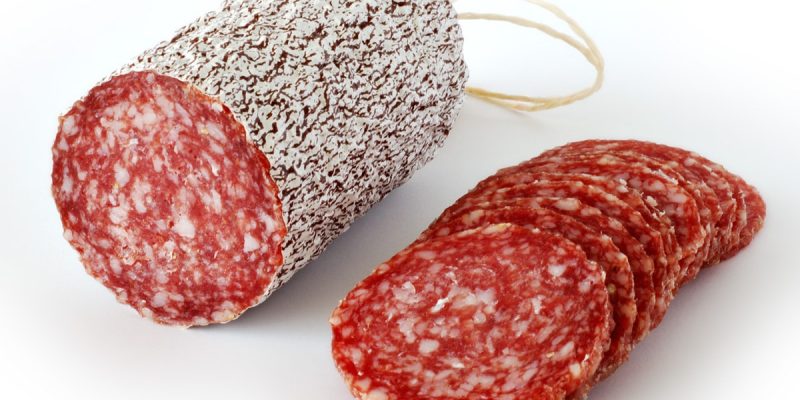 Traditionally made of pork and veal meat, it is typically seasoned with garlic, pepper, and red wine. 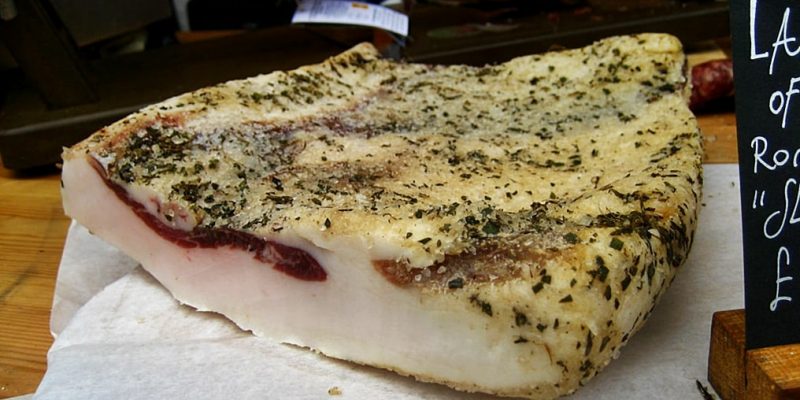 This salami made of pork, usually the back fat part, which is cured with rosemary herb.

Typically from Naples, it is made of pork meat heavily spiced with red and black pepper and seasoned with salt, garlic, and sometimes white wine. 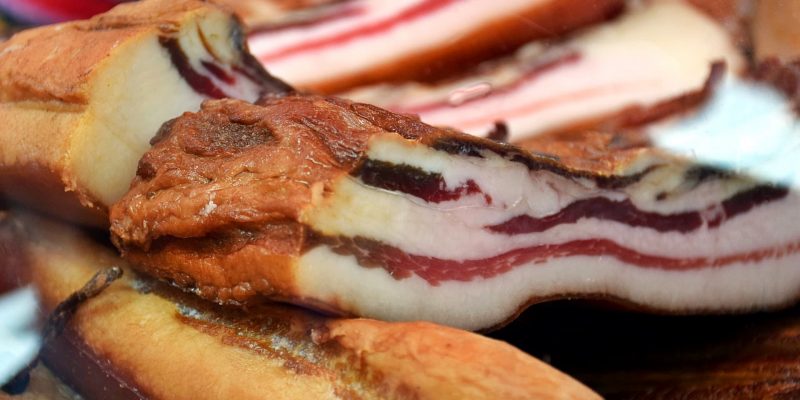 Traditionally made with pork belly, it is cured with salt and seasoned with herbs and spices. 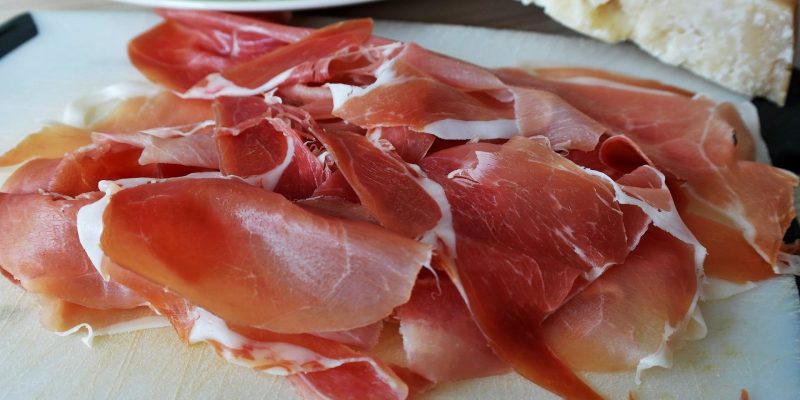 This salami is made with cured pork ham and is typically seasoned before it is cooked. Read more about what is prosciutto. 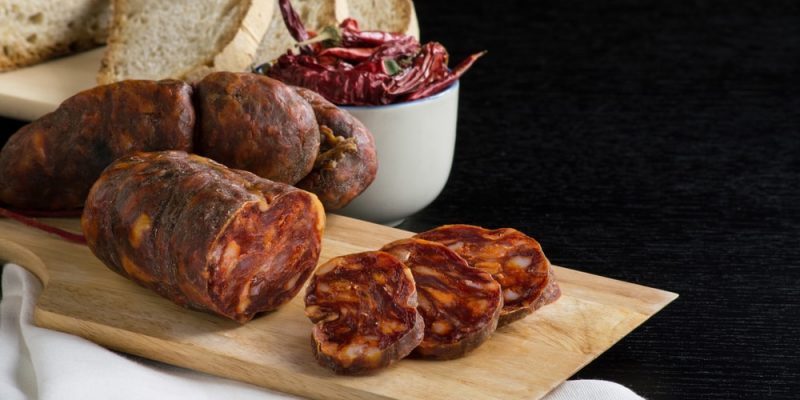 Usually made with pressed pork meat parts such as the belly, stomach, and tongue, and seasoned with a variety of spices and herbs, which may vary according to region.

WHAT IS SALAMI MADE OF?

So what is salami basically made of? Well, pork is the word of the day! It all starts with pork meat, which is minced alongside a certain amount of pork fat of the finest quality. Because yes, believe it or not, there is such a thing as high-quality fat.

This fine white fat blends in with the salami and should stick to it like glue when sliced—I know there are some of you who like to separate fat from meat (myself included), but in this case, the interior of the compacted meat is supposed to be reddish with what I like to call polka dots. If you are a Mortadella fan, these “polka dots” are not a rare sight.

You mix all of them together, giving the salami the shape of a sausage, you encase it and let it age in dark and cool cellars. Preservatives in certain quantities are acceptable, depending on the current food laws and optionally, salami can also be colored.

DOES SALAMI NEED TO BE COOKED?

It depends. Dry-cured salami is what you would see hanging on hooks when entering butcher shops and it needs no preparation before eating. The shelf life of salami is quite long, thanks to the preservatives, antioxidants and the low water activity.

As long as it’s kept in proper conditions and stored in dark and qcool places, it can retain its flavor for long periods of time. However, it will eventually deteriorate and lose its flavor thanks to rancidity, but it is believed that adding coriander as a spice helps delay rancidity for a longer period of time.

Salame cotto (typically found in the Italian region of Piedmont) is a type of salami which is normally cooked or smoked either before or even after curing it. The cooking doesn’t involve anything beneficial, as it’s not done for any specific nutrients, but merely for taste purposes, as cooking the salami make. all the flavors stand out.

HOW DO YOU PREPARE SALAMI?

Here is an interesting fact: while salami is mostly eaten uncooked, it’s wrong to call it raw. It’s not raw, but it’s not cooked…hm, where did I hear that before? Exactly—cured salami is a process similar to aging cheese. Salami goes through three main stages: preparation, fermentation and drying.

The first stage involves basically collecting all the required ingredients, just as we mentioned them when discussing about what is salami made of: milling and mixing the meat with spices.

Sometimes, a fermentation starter would be added and that helps eliminate undesired bacteria, while also making sure there are enough bacteria inside the meat, to kick off the fermentation, which is actually the second stage.

It’s quite fascinating how something like bacteria, that you normally associate to something…err, bad, is in fact needed to eliminate the “bad” bacteria. The lactic acid bacteria multiply and create lactic acid, which keeps the bad bacteria away from your precious meat.

After you give salami the required shape and encased it, fermentation (slow acidification process) will start, so that the salami can get the flavor we all love and recognize. What happens is chemistry, basically, with different chemical reactions taking place. The fermentation process takes about 35 hours. During this time, the lactic acid will increase the meat’s pH. Checking the pH will let you know if the fermentation is done or not, as the value needs to be between 5.0 and 5.3. You can easily test it out using pH stripes—if the pH is too high, then let it ferment 10 more hours.

Finally, you leave the salami to dry. Drying the salami is almost like creating a void, as there is a massive water loss which makes the meat tighter—but you don’t want to go that far either. While half of the water evaporates, you want to prevent excessive water loss by packaging the meat. This is similar to dehydrating fruits, which retain water inside, to avoid microbes to develop.

HOW DO YOU SERVE SALAMI?

In Italian restaurants, ordering antipasto can get you a plate of the finest Italian salami selection.

Salami like Strolghino, which is produced only in Parma, without preservatives and with a short shelf life of just less than two months, is served similar to prosciutto, meaning just a thin slice. Hard or dry-aged salami is served thick and as an appetizer and goes well with hard cheeses like pecorino.

And who are we kidding? Salami is also the go-to option when we want a nice, quick sandwich.

While you might be tempted to also add pepperoni pizza to this list, sadly, pepperoni is very much American and is in fact a salami mixed with beef and pork. It does resemble the salamis made in Napoli (salsiccia Napoletana piccante), but it’s a whole different affair.

Not to take anything away from pepperoni pizza, which I indulge in from time to time, but if you want a taste of Italy, you would want to look further.

The best thing about salami is that it doesn’t need an occasion—it creates one. It just screams picnic.

So stop asking any more questions about what is salami. Just take your basket with salami, cheese, olives and wine, and spend a lovely morning in company of your friends…or just on your own. After all, no one said you are meant to share such delicacy.