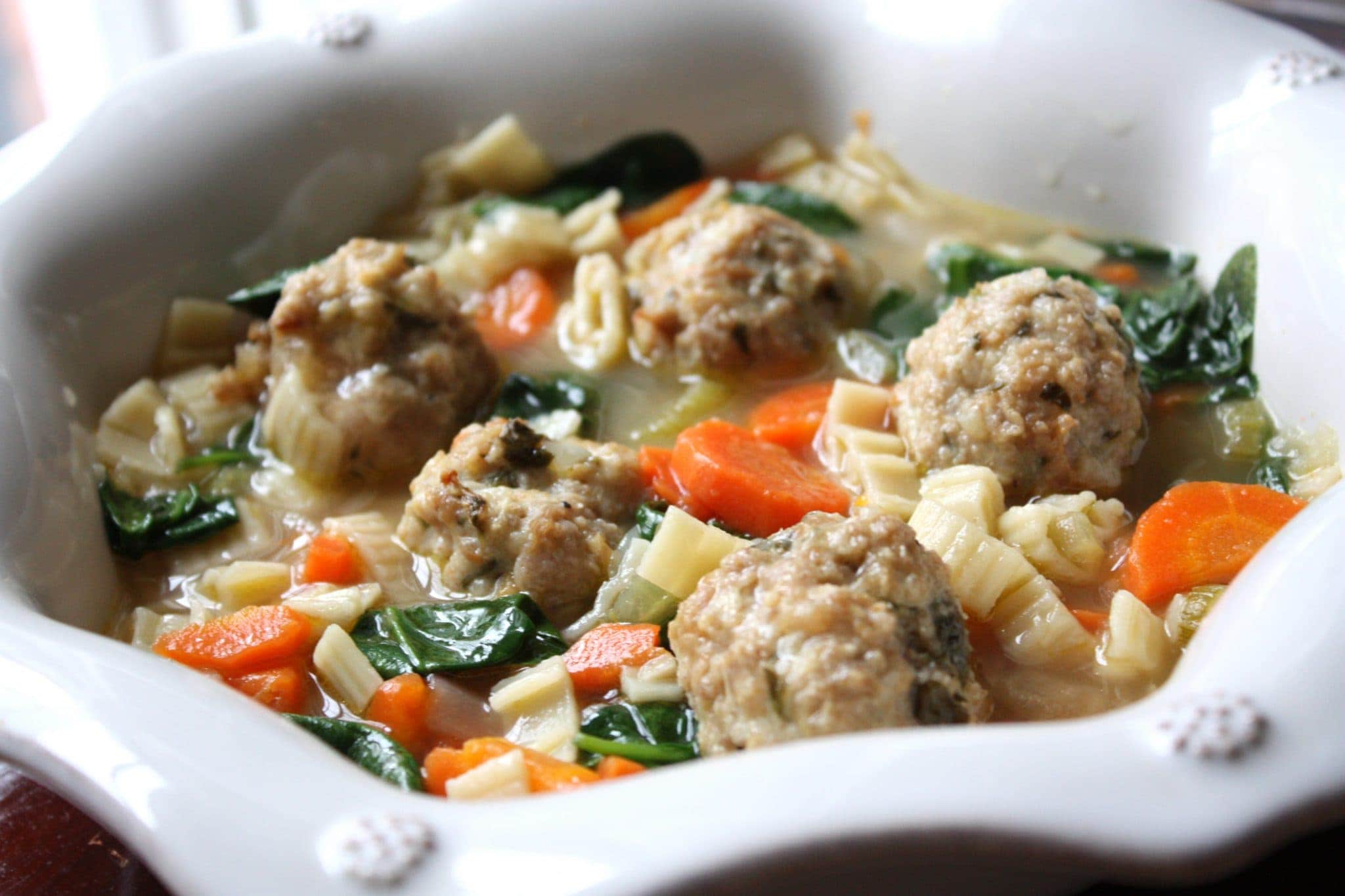 Because, let’s be honest—when we think about wedding buffets, we think of the wedding cake, the mashed potatoes, the pork and the chicken and the duck and who knows what people are eating at weddings these days. But soup? 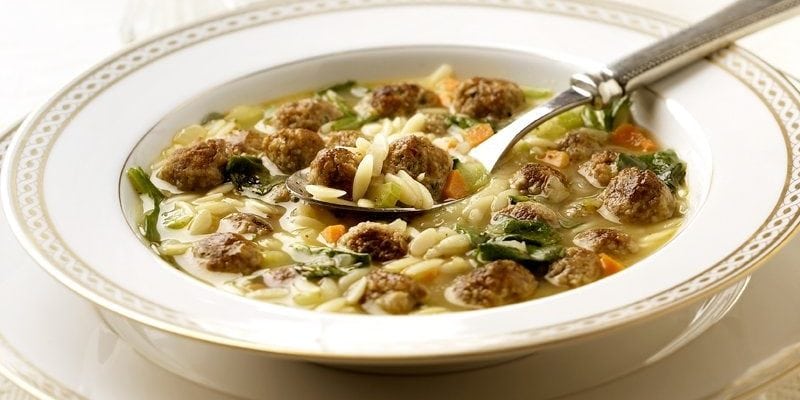 It is said that this particular dish was served at wedding receptions in Italy, so that when the night would come, the nuptial couple would have enough….errr, let’s call it energy—to go through it with a big grin. Wow, an aphrodisiac! Give me the recipe already. You can have a mental picture of the bride and the groom dancing and entertaining the guests, then sitting down and getting ready to eat, all this while feeling overwhelmed. Then, all of a sudden, this soup is brought in and they feel like the party is just getting started. Woo! 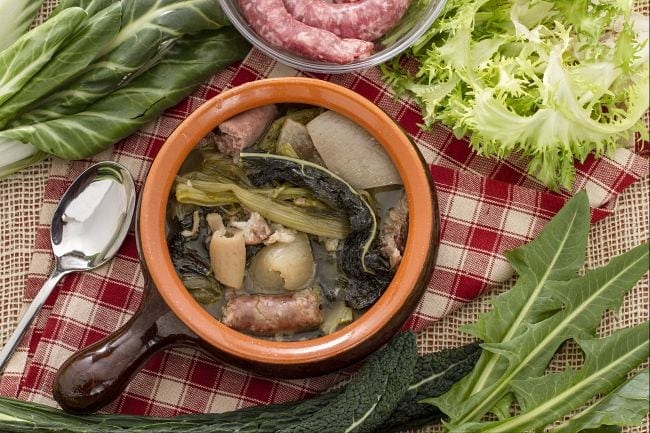 This Italian wedding soup history almost sounds way too good to be true. Wait, did I say almost? I’m terribly sorry to ruin your culinary fantasies, but all this is in fact just bogus—the Italian wedding soup has nothing to do with weddings and some might argue that not even with Italy, but with Spain, as there are those who say that the Spaniards brought it into Naples, while others claim that it’s been around in Italy long before that. Here is how the confusion came along.

Its original name in Italian is minestra maritata and it was translated to “wedding soup”, when in fact, a more appropriate translation would be “married soup”—as in green vegetables (minestra) blend very well (maritata) with meat. The marriage isn’t a marriage between two people, but between vegetables and meat. 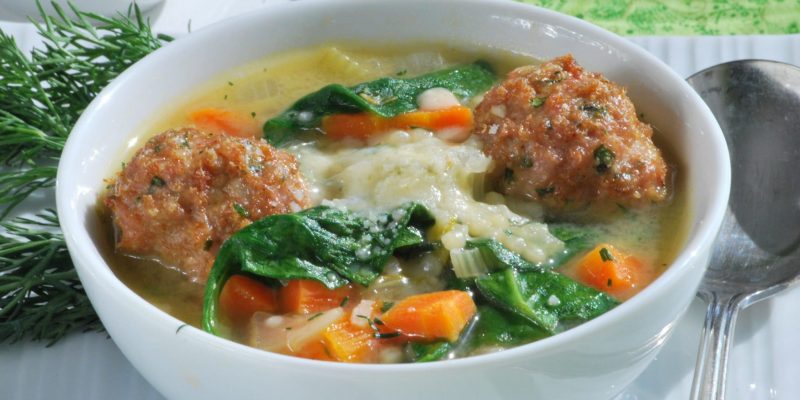 But don’t be disappointed! Even if this soup won’t guarantee that you will live happily ever after with your significant other, there are still plenty of things to love about it. This soup is a “peasant” dish, as it was mostly made with leftover meat (usually pork—either sausages or meatballs) in a broth, alongside whatever green or slightly bitter vegetables were around, like chicory, cabbage, escarole, chard, spinach, endive, lettuce.

Because its charm couldn’t go unnoticed, the Italian wedding soup history also has ties with America, where it was brought by Neapolitans. As expected, the Americanized version is lighter, since because some people couldn’t afford food back in the day in Italy, they would cook this wedding soup as a means to stay full throughout the day. Not to mention that eventually pasta became commercialized and affordable and is now frequently added in the mix of this soup. 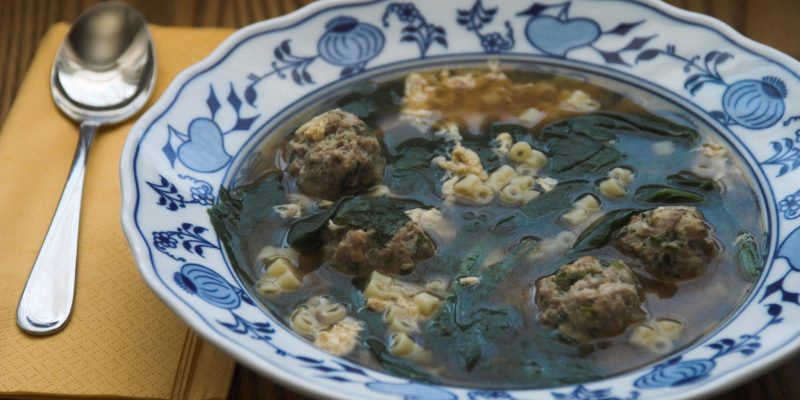 The Americanized version also tends to go for smaller meatballs and also with fewer vegetables. As a matter of fact, the original recipe was mostly focused on the vegetables and it barely had any pieces of meat—sometimes it didn’t even have any. Opting for fewer vegetables, contrary to popular belief, isn’t really tied to Americans not being big veggie supporters. The truth has more to do with the supply, meaning lack of such greens. So as much as I like to scream: “Eat your veggies!” it’s basically a matter of availability they can do nothing about, as those bitter herbs used in making the dish are mostly found in southwestern Italy. 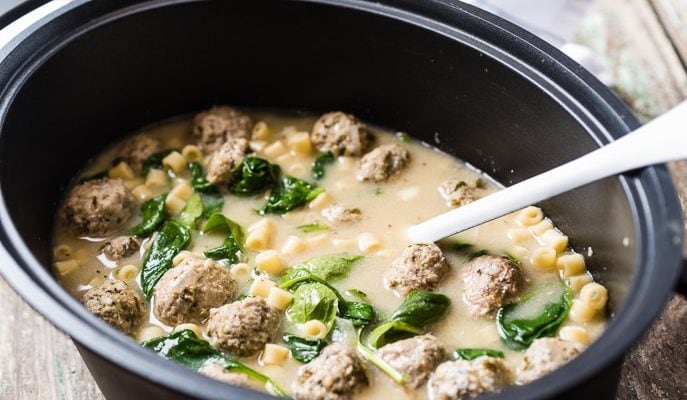 It’s still debatable when minestra maritata is best eaten, as some consider it to be winter-y, while others don’t mind eating it during Easter time as well. Its name is tied to the ritual of pig slaughtering. It’s a common ritual for many countries to butcher pigs in winter and because nothing is thrown away, scraps of prosciutto would be boiled alongside pork bones and the broth would eventually get its flavor by adding green. In parts like Bagnoli Irpino (Campania), it’s typical to also add in the mix salami made of pork intestines and stomach.

A variation of this salami is the salame pezzente, found in regions like Lucania or Puglia, and in other parts of Campania. Salame pezzente is traditionally prepared with offal (liver, speen, lungs) and flavored with spices. It literally translates to beggar salami and historically, it was the last sausage made from pork and it was extremely high in fat and not meant to be consumed directly. Thus, it was added as a side dish to main courses like ragù, soups, and of course the minestra maritata.

And I know what you’re thinking—ewww, sausage with fat! How could anyone eat that? Well, if intestines and stomachs make you squeamish, just remember this—mortadella is made from the hard fat from the neck of the pig.

Have you tried the Italian wedding soup before? Are you still secretly hoping that it will provide the key to eternal marriage bliss? After all, love goes through the stomach.

5 Responses to “You think you know the Italian wedding soup history? Think again”