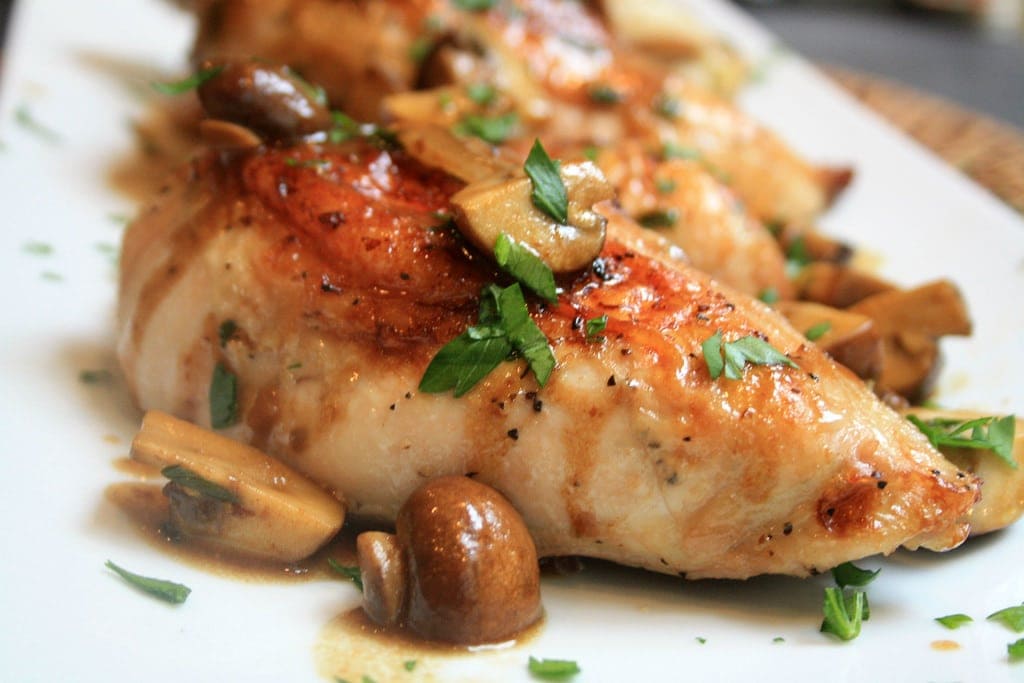 Quick Navigation show
1 How to Make Chicken Marsala
2 Easy Chicken Marsala Recipe
2.1 Ingredients
2.2 Instructions
2.2.1 Cooking the Chicken
2.2.2 Making the Marsala reduction sauce:
2.3 Nutrition
3 Where to start…
4 Chicken Marsala: A Brief History
5 What is Chicken Marsala?
6 All about Marsala… the wine, not the city
7 Things you may not know about Chicken Marsala
Jump to Recipe Print Recipe
378 shares

How to Make Chicken Marsala

Often served as a secondo, most Italian restaurants in the U.S. that serve this dish have their own versions of original recipe, tweaking it a little bit here and there to leave their own place’s signature. This is not such an uncommon practice in the culinary world. However, there is a classic way to making Chicken Marsala.

First, you coat the chicken with flour and saute or lightly fry it. Then, when the meat is cooked, you set it aside. With a saucepan, you make the sauce, which is a reduction of the Marsala wine with mushrooms, onions, butter, and olive oil. 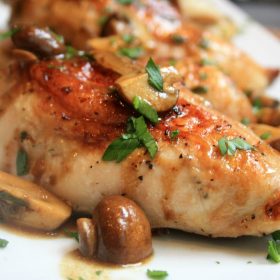 Chicken Marsala is a rich dish that has its roots from the island of Sicily, but has become quite popular in the United States for many years. One of its main ingredients is the Marsala wine, which also comes from Sicily.
5 from 7 votes
Print Pin Rate
Course: Secondi
Cuisine: Italian
Keyword: marsala, pollo
Prep Time: 10 minutes
Cook Time: 30 minutes
Total Time: 40 minutes
Servings: 4 people
Calories: 285kcal
Author: Nonna Box

Quite a popular dish in the United States, you can probably find that most Italian restaurants have their own versions of Chicken Marsala in their menu. Even restaurants that do not technically strictly serve Italian cuisine may have this. Why, you ask? Well, it’s because it’s a rich flavorful chicken dish that’s not only a delight to the palate but also quite nutritious.

And yes, it’s nutritious. After all, it has chicken in it, and we’ve already mentioned the collection of healthy goodness you can get from this lean meat in one of our previous recipe posts. Can’t recall? Check out our Risotto with Asparagus and Chicken recipe and you’ll find out exactly all the good things chicken meat can bring you and your family… or anyone else you serve these chicken dishes to.

Back to the scrumptiousness at hand, let’s find out more about this popular special dish.

There is some teeny tiny debate as to its origins. Whether it may be because of its delectably rich flavor or its apparent popularity today, no one’s quite sure. Some say it’s an Italian-American dish brought by English settlers who previously lived in Sicily during the 19th century. Others say it has French origins because the recipe for its sauce can be supposedly traced back to Queen Maria Carolina of Naples and Sicily, who was The French Queen Marie Antoinette’s sister. Others still say that it’s a traditional Sicilian dish since one of its main ingredient is from a Sicilian city. But whichever of the supposed historical accounts may be true, there’s no debate whatsoever that the earliest Chicken Marsala recipe indeed has Sicilian roots.

What is Chicken Marsala? 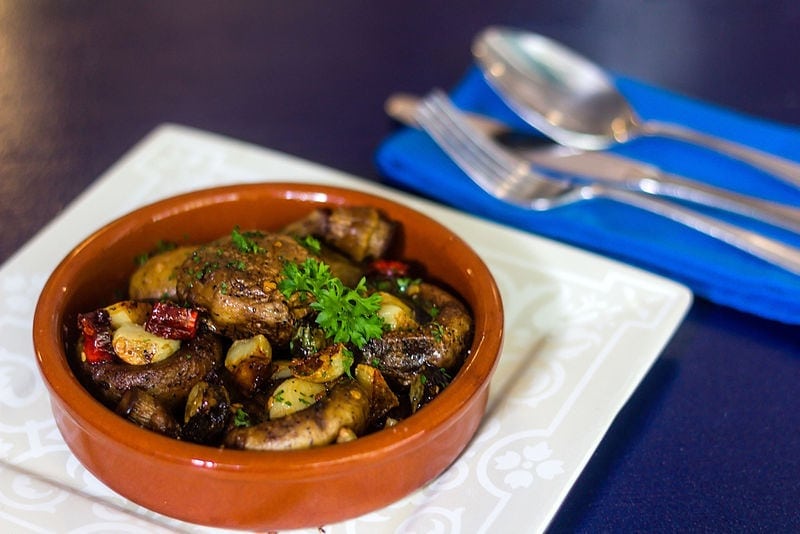 This traditional Italian dish is from the autonomous region of Sicily. Yep, I am indeed referring to the beautiful Mediterranean island where the infamous fictional Vito Corleone comes from. Apparently, Sicily is not just famous for its gorgeous beaches and sparkling blue green waters, but also for its regional food… which should not be much of a surprise since the rest of the country is littered with regions, each with their own delectable regional food.

But exactly what is Chicken Marsala made of and why is it so special? (Besides the fact that it comes from the same place as the yummy cannolis and the Corleones, that is.)

Now, the main ingredients to this Sicilian dish are chicken breast, mushrooms, and of course, Marsala wine. And yes, the presence of this wine is where the dish got its name. Call it a key ingredient, if you will.

All about Marsala… the wine, not the city 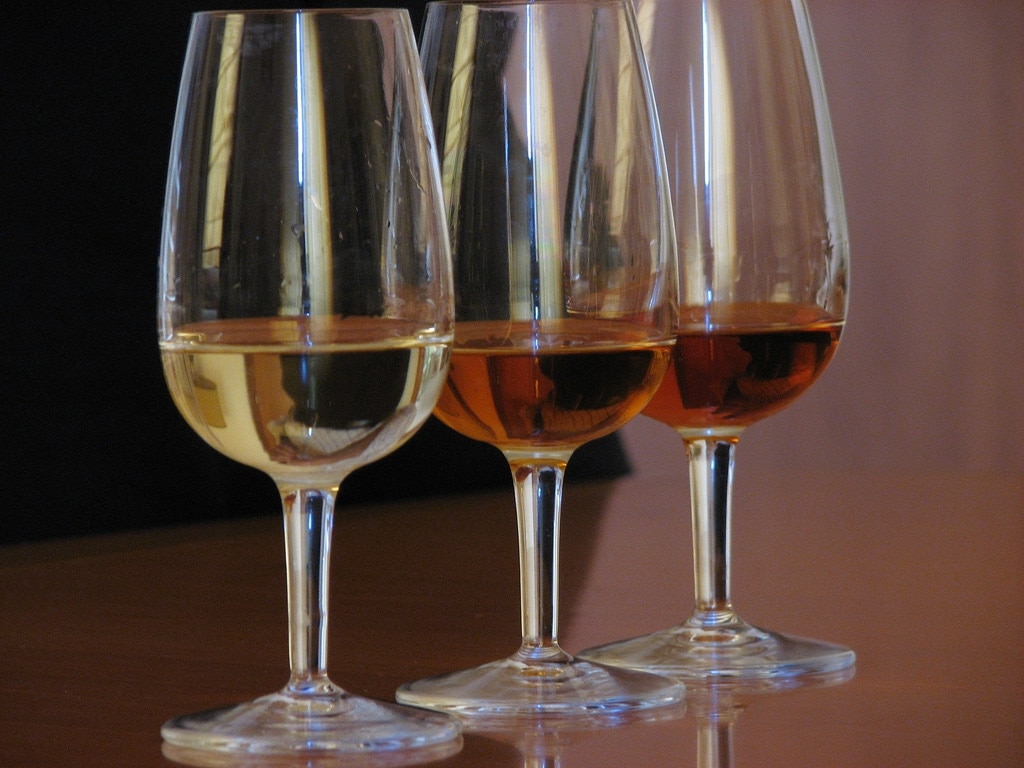 So what exactly is Marsala wine? Well, it’s a fortified wine that originated in the city of (yep, you got it!) Marsala, which can be found in Sicily, naturally. Now, fortified means that it is mixed with brandy or grape spirits, which means they have a higher alcohol content than most wines. As a matter of fact, Marsala wines contain about 15 to 20% alcohol by volume. In comparison to the popular Chianti, which usually has up to 12% alcohol by volume, Marsala is obviously quite stronger and may get you woozy with half the quantity. Other examples of fortified wines are Sherry, Madeira, and Port.

Also, Marsala is not just one kind. It actually comes in different varieties according to color, age, and sweetness. The three colors are gold, amber, and ruby while the three levels of sweetness are dry, semi-sweet, and sweet. The five common age or quality levels are the following:

Marsala wines can also contain an amalgam of fruity, sour, and sweet flavors. Among the most common ones you’ll discern are apricot, brown sugar, tamarind, and vanilla. High-end Marsala wines, however, can also have the following nuances:

Another thing you should be aware of regarding Marsala wine is that it’s quite unique that it can be paired with the some of the “hard to match” foods such as chocolate, asparagus, and even brussel sprouts.

Note: When buying Marsala wine for Chicken Marsala, you should probably only get either of these two: Fine (Fino) or Superior (Superiore). These are the types most appropriate for cooking.

Things you may not know about Chicken Marsala 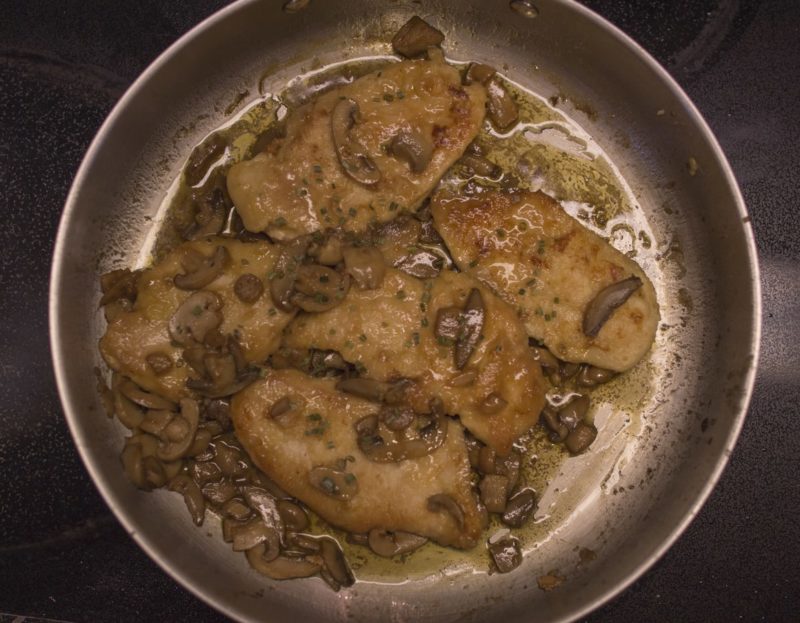