Quick Navigation show
1 WHAT IS TIRAMISU?
2 WHAT DOES TIRAMISU MEAN?
3 AND WHAT’S THE HISTORY BEHIND IT?
4 HOW IS TIRAMISU SERVED?
5 Classic Tiramisu Recipe
5.1 Ingredients
5.1.1 For the Coffee Dip
5.1.2 For the Zabaione Filling
5.1.3 For the Layers
5.2 Equipment
5.3 Instructions
5.4 Video
6 Recipe Notes
6.1 How to store tiramisu?
6.2 What can be used instead of mascarpone?
6.3 What type of coffee is best for tiramisu?
6.4 Can you freeze tiramisu?

When I start talking about food, my mother somehow always ends up in the conversation, because her cooking made me love food in the first place. She wishes it would have made me love making food as well, but I guess you can’t have everything in life.

The reason why I am once again talking about my mom is that her desserts were (and still are!) out of this world. For a long time, as a child, I didn’t even like chocolate or cakes or any of that. Shocking, right? But mom eventually won me over with her recipes, and one of my personal favorites will always be her tiramisu. It’s just ridiculous and, in my humble opinion, the best tiramisu recipe around.

I’ve tried tiramisu at many restaurants, but not even the best one can compare to my mom’s. I think in part it’s because she always follows a traditional recipe, and most of the time, “traditional” stands for “the way it’s supposed to be.” But before I reluctantly share my mother’s step-by-step recipe to make tiramisu, let’s go a little bit through its history and what exactly is at the heart of one of the most popular classic Italian desserts.

One of Italy’s most popular desserts, tiramisu is an elegant, rich layering of bold espresso and cocoa, creamy mascarpone, sweet Marsala wine, and delicate ladyfingers, a low-density sponge cake-like cookie. The ladyfingers, which are themselves classic Italian treats, are briefly soaked in an espresso and sugar mixture to soften them.

These are layered with a mixture of mascarpone cheese and zabaione, also called zabaglione, a traditional custard made with Marsala wine, egg, and sugar, all of which come together to create a creamy filling. Some people may use whipped cream in place of mascarpone, but the latter provides a more authentic flavor and texture.

Finally, cocoa powder dusts the top of these layers for additional flavor and to top off tiramisu’s classic appearance. As an added bonus, this delicious recipe is also an absolutely delicious no-bake dessert!

WHAT DOES TIRAMISU MEAN?

You might be surprised that this classic Italian dessert’s history has a lot to do with … love. Tiramisu, in Italian, stands for “pick me up,” but its meaning takes various shapes, as it can also be interpreted as “cheer me up.”

AND WHAT’S THE HISTORY BEHIND IT?

Tiramisu is another one of those confusing recipes that we don’t know whom to attribute to. A consensus seems to be that it was born in Treviso in 1970, first starting out as a “sbatudin,” which is like tiramisu in its first undeveloped and unlayered form.

Eventually, sbatudin turned into the authentic Italian tiramisu recipe we all love, through influences from other Italian regions.

In the late ’60s, a gastronome and actor named Giuseppe Maffioli published a book about Treviso cuisine. In the book, he talks about eating zabaione cream and biscuits with the whole family and mentions it being a Venetian tradition.

“Tiramesù,” as it was called in the beginning, was served for the very first time at a restaurant called Le Beccherie by a pastry chef named Loly Linguanotto, who was just returning to Italy after perfecting his baking skills in Germany. The tiramesù was an instant hit, and not only was it served in the province of Treviso, but also throughout Veneto and even all of Italy.

And as many good things do, it became famous worldwide and developed into several variations, like this pistachio tiramisu recipe.

HOW IS TIRAMISU SERVED?

Tiramisu is a dessert served semifreddo — which means it’s not ice cream, but it’s not lava cake either. It’s perfect to eat just as you take it out of the fridge, and it actually tastes better if you leave it to sit overnight and even after a few days.

Although, honestly, when it comes to such a dessert, it’s quite a challenge to let it sit for too long. I guess that’s the Italian charm of food, where anything as basic as a salad dressing or pasta will be eaten on the spot, with no leftovers. 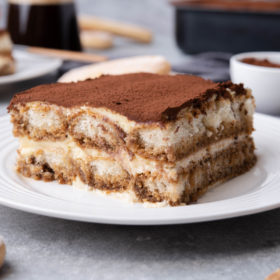 For the Coffee Dip

For the Zabaione Filling

How to store tiramisu?

The best way to store this Italian dessert is in the fridge, where it will last for up to four days covered with plastic film.

What can be used instead of mascarpone?

If you’re unable to obtain mascarpone cream, whipping cream or double cream can be used in a pinch.

What type of coffee is best for tiramisu?

Can you freeze tiramisu?

It is possible to freeze tiramisu provided you use a full-fat mascarpone cheese mixture. To freeze, wrap the dessert in a layer of plastic wrap, then cover with a layer of foil and freeze for up to three months.