Quick Navigation show
1 What is Pizzelle cookie exactly?
2 History of ferratelle: where did the pizzelle cookie come from?
3 Pizzelle: The territory of origin
4 The recipe for authentic pizzelle
5 Authentic Pizzelle
5.1 Ingredients
5.2 Instructions
6 A little note about Pizzelle

The Ferratelle, or Pizzelle how everybody knows them in the US, are one of the most famous Christmas desserts still made today according to the ancient tradition of sweets from Abruzzo.

Mostly known as ferratelle in Italy, they are delicious waffles with an original shape cooked with an iron tool.

They are typical of the cuisine of Abruzzo but also of Lazio and Molise and are also known as neole, pizzelle, nuvole, cancelle or cancellate. In Roman times they were even called crustule.

The different names change depending on the Italian region in which they are made.

A genuine biscuit dough is prepared with a dough based of natural ingredients: flour, milk, eggs, sugar and aromas are mixed to create a batter then cooked on a particular double iron or cast iron plate, made hot by the fire.

This hot tool, crossed by grooves, gives the characteristic rhombus weave a rectangular shape, the most widespread variant in Abruzzo.

But in the US, everybody knows pizzelles as a rounded shaped waffle with snowflakes design.

Depending on the type of iron used, the “ferratelle” may turn out to be cooked soft and soft or crunchy and slightly high, a characteristic due to the different ribs of the plate, called “lu ferre” or “jo fèrro” in Abruzzese dialect.

History of ferratelle: where did the pizzelle cookie come from?

An Italian historian who lived in the nineteenth century, Giuseppe Tassini, cites Ferratelle in his masterpiece “Curiosità Veneziane – Ovvero: Origini delle denominazioni stradali di Venezia“, also calling them inferriate or scalette for the similarity of these treats to the windows or stairs.

It seems that the origin of this specialty is to be traced back to a distant era, when the ancient Romans used to prepare a dessert called crustulum, practically with the same ingredients.

The plates used to cook the ferratelle, however, began to appear only around the 1700, a historical period in which these iron tools with the double plate and the handles were forged by the blacksmiths on commission of the brides of the rich families of Abruzzo, who would engrave on the plates the coat of arms of the family or their initials.

“Lu ferre”, was in fact the dowry that young girls brought to her husband.

Ferratelle today stand out in the windows of many patisseries in Abruzzo but in the past they were considered the “party sweets”, to be prepared during the Easter week or during the celebrations of the patron saint, as a tribute as a sign of respect and devotion.

Many Italian immigrants who emigrated to the US also brought their traditional pizzelle recipes with them. This traditional cookie is in fact one of the most prepared recipes during the Christmas season.

Pizzelle: The territory of origin

Pizzelle have a paternity of Abruzzo but are particularly widespread in other Italian regions: in Molise these sweets were served at least until the 60s during weddings and have always been known as “cancelle”, a name that alludes to the grooves of the gates impressed from the reliefs of the classic iron plate.

Even in a delimited area of Lazio, the district of Cittaducale, a former territory of Abruzzo, is tradition to prepare these confectionery specialties, which in this region have obtained the recognition of PAT, traditional agro-food product.

The recipe for authentic pizzelle 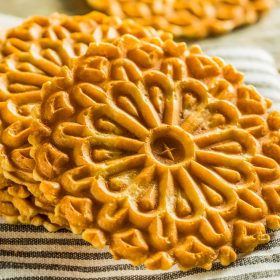 A little note about Pizzelle

According to the tradition of Abruzzo, it is said that the right cooking time of the wafers should be calculated by reciting a prayer on each side of the pizzelle: the time of a “Hail Mary” on one side and of “Our Father” on the other to ensure that the desserts are perfectly ready.