Arancine (or arancini) are the best known Sicilian street food in Italy and in the world, yet there is no certain information about their origin, nor do we know the name of the chef who invented them.

The most widespread theory starts from an analysis of their ingredients and traces their origin back to the High Middle Ages, during the Arab occupation (from the ninth to 11th century AD) that played a large part in influencing history and customs — including food — of Trinacria (present-day Sicily).

The Arabs were responsible for introducing spiced rice, flavored with saffron and served on a large plate placed in the center of the table.

It was accompanied by meat and vegetables, and diners served themselves by taking some rice with their hands and eating it with the accompanying food.

Subsequently, Emir Ibn at-Timnah (known for allying himself with Ruggero di Altavilla to deliver Sicily to the Normans and free it from the Saracen domination) invented timballo di riso, and from there, creating single portion timballos was quick. The ragù filling is traced back to Norman domination, while it seems that the breading was made during the time of Frederick II of Swabia, when he was looking for a way to bring the dish with him on hunting trips. Thanks to the breading and frying, the rice and its filling were perfectly transportable.

According to this theory, arancine can be defined as a very happy synthesis of the various historical influences on this warm and welcoming island.

Even the name arancine can be traced back to ancient Arab culture: all the round meatballs in the Arab world took their names from the fruit they resembled in shape and size. The comparison with oranges was natural in Sicily, since the island has always been rich with them.

One fact refuting this origin theory is that this dish is not mentioned in any texts written prior to the second half of the 19th century, suggesting that arancine’s origin is more recent. The first Sicilian-Italian dictionary recording the word arancinu, that of Giuseppe Biundi, is dated 1857 and describes a sweet — not salty — rice dish made in the shape of an orange.

Ten years later, Traina defined it as a savory dish, though neither meat nor tomatoes are ever mentioned. It is difficult to say when these two ingredients entered the recipe;however, it is known that tomatoes were introduced to the south of the peninsula at the beginning of the 19th century.

In light of these facts, the link between the Sicilian arancine and the Arab tradition no longer seems so certain. Rather, the dish may have been born in the second half of the 19th century as a rice cake that quickly evolved into a salty specialty.

The Arancina festival occurs in Palermo and other parts of Sicily on December 13, the day of Saint Lucia, during which bread and pasta are not consumed, but arancine, panelle, and cuccìa (boiled wheat soup) are eaten and seasoned with extra-virgin olive oil.

If the origins of arancine are uncertain, the derivation of the name is certain: the first arancine, stuffed with ragu and peas, had the round shape and golden color of an orange.

Over time the fillings have differed, and with them also the shapes, in order to distinguish one filling from another: those with meat sauce remain round (in Catania, however, they have a conical shape, to remember Etna), while those with butter, stuffed with mozzarella, cooked ham, and bechamel, are oval.

These are the two classic flavors, to which the inventiveness and traditions of various cities have added others: in Catania there are those alla Norma with fried eggplant, tomato sauce, and salted ricotta and those with pistachios from the nearby Bronte; in the Messina area there are even about thirty variants, which include Sicilian salmon.

In Palermo on the day of Saint Lucia, a sweet version is also prepared, stuffed with gianduia cream (or with chocolate, as happens in Modica) and sprinkled with icing sugar.

In western Sicily, the rice of the arancine is dyed with saffron, while in the eastern part of the island, the golden color comes from slightly cheaper tomato sauce.

A note on the name

So far I have used the female term arancine, but many people instead use the male arancini. This is because in Italian the distinction of gender — in this case, female for orange (arancia) and male for orange tree (arancio) — arose only in the late 20th century. But in the Sicilian dialect, the fruit is aranciu, which in the Italian peninsula becomes, confusingly, arancio.

For the famous Sicilian rice balls, then, arancine (plural of arancina) is considered more correct, because it is derived from the word for orange as opposed to the word for orange tree. However, arancini (arancino), being more popular in Sicily, is also widely accepted.

How to Make Them

2. Place the ingredients on a tray

The making of Sicilian arancini: Italian ragu, peas and cheese cubes placed on the table of a Sicilian cook and the boiled rice in the background

3. How to make the arancini

Here’s the shape of the traditional arancino

submerse them in the batter

Cover a typical Sicilian arancino with bread crumbs before frying it

Here’s the traditional shape of the Sicilian ball. 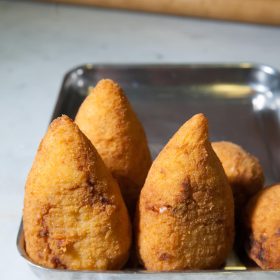 For the butter filling (about 9 arancine)

For the meat filling (about 9 arancine):

For the lega (batter):

Start with the preparation of the lega (batter):

For corn oil, be careful not to exceed 445°F, the smoke point of this type of oil. It is important to check in advance what the smoke point of the chosen oil is and to always use a kitchen thermometer. Of course, other types of oil are also fine (extra-virgin olive oil, peanut oil, etc.), as long as you do not exceed the respective smoke point.

Buon appetito! Have you tried this recipe? Let us know in the comments below!