Casatiello Napoletano – The Story Behind the Traditional Neapolitan Easter Recipe

Quick Navigation show
1 SWEET OR SALTY?
2 THE ORIGINS OF THIS NEAPOLITAN EASTER BREAD
3 CASATIELLO ON EASTER TIME – WHY?
4 Casatiello Napoletano - Neapolitan Stuffed Easter Bread
4.1 Ingredients
4.1.1 For the dough
4.1.2 For the filling
4.2 Instructions
4.3 Notes

The casatiello is a traditional Neapolitan bread that is made as part of Easter celebrations.

Typically donut shaped, it features a mixture of water, lard, lots of pepper, and brewer’s yeast. It is also enriched with many different varieties of cheese; in particular, pecorino and cured meats are hidden inside.

The main difference between the casatiello and its relative the tortano is that for the casatiello the eggs are placed on top of the bread, secured by a cross of dough, and then baked.

The Treccani online dictionary defines “casatiello” as a masculine, Neapolitan noun, derived from the Latin caseus cheese. The dictionary describes it in two different forms: the more popular salty preparation as well as the less well-known but equally delicious sweet variant.

The sweet version is found in some areas of Campania, particularly in the Caserta area, and is characterized by a dough containing brewer’s yeast. After the bread has been cooked, white icing and diavulilli (colored sprinkles) are added.

In Naples, as in most of Campania, if anyone asks for a casatiello, they inevitably mean the salty variety.

THE ORIGINS OF THIS NEAPOLITAN EASTER BREAD

The origins of this rustico date back many hundreds of years. In fact, the first evidence of this traditional recipe can be tracked as far back as ancient Greece, where we find the first references to bread seasoned with various ingredients: the plakountes.

A similar focaccia was part of the offerings in honor of Demeter, as it appears in a work of art in the Louvre showing a procession in which there are some loaves that each have a hole in the center. This type of Greek bread was then named, with some local variations, from the Roman word that adds the adjective caseata, from the Latin word caseus.

Although it is a traditional Easter recipe, it is not served on Easter Sunday but offered to family and friends starting on Holy Saturday, but absolutely not before. It is removed on Easter Monday during lunch.

In Naples, it is said that it should never be eaten before Saturday because of “S’adda sciogliere a’ Gloria,” an expression that refers to the conclusion on Easter Sunday of the rites of the Easter Triduum, the days of mourning for the church. With the lighting of the Easter Candle and the sounds of bells, the resurrection of Christ is celebrated. In this way, fasting ends, and at home, the meats and desserts are returned to the tables.

CASATIELLO ON EASTER TIME – WHY?

The link between this rustico and the meaning of Easter is further validated by the fact that the casatiello has in itself some strong symbologies. First of all, its circular shape and the eggs (symbols of the Resurrection) secured on top by pasta crosses symbolize the crown of thorns worn by Jesus Christ and the martyrdom suffered by Him for the salvation of all.

Another strongly symbolic element is the presence of pecorino cheese, a cheese made from sheep’s milk that feeds the lamb, reminiscent of the lambs sacrificed to God in the Old Testament.

Casatiello is made in a ruoto, a characteristic circular pan with a central hole and high angled edges that allow the bread to rise, filling the pan and giving it a shape similar to a tall ciambellone.  Some people cover the central hole of the pan and butter it, because often the dough will rise so much that it almost engulfs the hole. This is one of the most beautiful parts of the tradition that has been handed down from generation to generation.

When it comes to stuffing the casatiello, the butchers and delicatessens in Naples frequently sell a ready-made mixture of meats and cheeses, which are specially selected to add the best flavor and texture. Sold by weight, they are usually cut into squares to speed up the preparation process for the cook.

Walking through the historic center of Naples close to Easter, you can enjoy the wonderful and unique aromas of casatiello coming from the bakeries. If you happen to be on the famous shepherd’s road, San Gregorio Armeno, you can also find among the various figurines of the nativity scene the world-famous baker’s shop with casatiello displayed between the loaves of bread and pastiera.

Part of the ritual involves preparing the casatiello in the company of friends or family. As with all the old traditional recipes, everyone thinks that they have the secret to preparing the best dough, which will include just the right amount of suet and pecorino, and the perfect balance between cured meats and cheeses. It is not uncommon for people to criticize their friends’ casatiello by saying things such as, “Your version has too much pepper,” “It’s too greasy,” “If you could taste what my grandmother made …,” “It’s too empty … I do it fuller,” … classic diatribes of those who think they have the “true” traditional recipe.

When it comes to making the filling, there are those who add in mortadella and those who do not use cicoli, but the ingredients that cannot be left out are the pecorino, pepper, Neapolitan salami, and suet. If you do not use these four ingredients, you are not preparing casatiello but another rustico.

Traditionally, casatiello was baked in a wood-fired oven. Neapolitan women used to prepare the dough for casatiello at home, cuddling it like a child as part of the preparation and the leavening. They covered it with a blanket so as not to “let it get cold” and then carried it to a bakery and placed it in a wood-fired oven, waiting impatiently to see how it turned out.

I have decided to share the recipe that my grandmother used and handed down to my mother, and that I now cook every year on Holy Saturday, hoping to be able to one day give it to my daughter along with all of the various traditions that revolve around this delicious bread. It comes from one of the Neapolitan cookbooks that I love most: La Cucina Napoletana by J. Carola Francesconi, which was given to me by my mother. 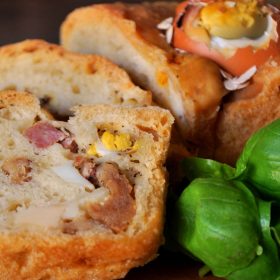 Sugna, or suet, is to be added generously to the dough before stuffing it. Also rub suet on the outside, and use it to grease the ruoto pan. The preparation time is considerable, and the worst thing you can do is try to rush the process. Considering the leavening, cooking, and preparation, I suggest you factor in about 5 hours.
Liked this recipe?Follow us NonnaBox for more!