​​If you know a bit of Italian you may expect Zuppa Inglese to be listed as a soup in the starters section of the menu as it literally translates to “English Soup”.

But, in fact, it’s actually a delicious classic traditional Italian trifle that is made by layering delicate ladyfingers dipped in liqueur with smooth vanilla and chocolate pastry cream that is then set to perfection and dusted with cocoa powder. It’s a sinfully good dessert found in many authentic Italian cookbooks and restaurants.

But why is this elegant Italian trifle dessert made of ladyfingers, liqueur, and custard, called Zuppa Inglese? Truth be told there is no easy answer.

There are many stories of how this yummy dessert came to be called “English Soup” from celebratory dinners for Admiral Nelson in Naples to English housemaids throwing together leftovers in Tuscany. So there are plenty of possible explanations, but no one really knows.

One idea in John Mariani’s, Dictionary of Italian Food and Drink, even suggests that it could simply be a breakdown of the word inzuppare which means “to sop”, as the ladyfingers in Zuppa Inglese sop up the liqueur.

But all stories aside, most people believe that a dish similar to modern Zuppa Inglese began being developed in the Emilia Romagna and Tuscany regions of Italy sometime in the 1500’s.

Not as exciting as some of the other stories, but the most likely explanation is that Victorian era English expatriates were craving something similar to an English trifle and ended up substituting typical trifle ingredients for the local Italian equivalents. So pound cake became sponge cake, English custard became Italian pastry custard (or crema), and so on.

And over the years as the dessert spread throughout Italy many regional, and even city-specific variations were developed. This created a dessert that is quite versatile and a decadent ending to a wide variety of meals.

However, for this easy Zuppa Inglese recipe, we will be focusing on the Emilia Romagna style of this classic Italian dessert. It is the most traditional variation with the longest history.

What is Alchermes? – Medicine of the Medicis

Alchermes is a spicy-sweet Italian liqueur that is a key ingredient in most traditional Zuppa Inglese recipes. It is a medium-strength liqueur (21% to 35% abv) made by adding cinnamon, cloves, nutmeg, vanilla, and other herbs and flavoring agents to a neutral spirit.

Its striking red color was originally created by adding small insects known as Kermes to the ingredient mix in a similar way that is done with Campari and many other Italian amaro liquers. This too was the source of the name, an Italianization of the Arab al’kermes.

Yet, nowadays these insects are rarely an included ingredient by most Alchermes makers. They have very little impact on the flavor, so you aren’t missing out on anything if you opt for Alchermes, or another substitute, without them.

One recommended substitute is rum with grenadine (for color) or simply grenadine syrup if you want to make an alcohol-free version of Zuppa Inglese.

How to Make Alchermes at Home

If you can’t find a bottle of Alchermes, you can always make your own. It will come close to replicating the original if you have a couple of weeks to wait. 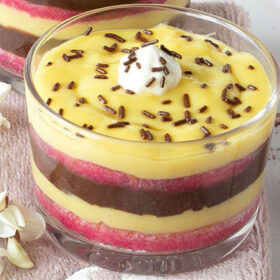 Ladyfingers are used as they are the most common form of this dish today, though a layer of sponge cake cut to the shape of the serving dish can be swapped in for the layers of ladyfingers when building the dessert. Quantities can be reduced by ratio to make a smaller amount to serve fewer guests.
Liked this recipe?Follow us NonnaBox for more!

How long will Zuppa Inglese keep?

This dessert will keep for up to 4 days in the fridge when covered and stored well.

Can I freeze this dessert?

No, it’s best eaten within a few days of being made and will not freeze well.

Can I make this recipe ahead of time?

Yes, you can. In fact, there are 2 ways to do this. You can make the Zuppa Inglese, cover it well, and store it in the fridge until ready to serve. Or, you can make the pastry cream ahead of time and then assemble the dessert a few hours before serving.

Can I make this dessert alcohol-free?

Yes, you can use grenadine syrup or even pomegranate juice in place of the Alchermes to make the recipe alcohol-free.

Can I make gluten-free Zuppa Inglese?

Yes, this recipe can most likely be made gluten-free, but I have not tested it. If you do, I suggest using gluten-free 1-to-1 flour for the pastry cream to work. And just replace the ladyfingers with a gluten-free sponge cake.