Quick Navigation show
1 The Pasta
2 The Tomatoes
3 The Chili
4 That can’t be it though, can it?
5 Wine Pairing
6 Penne all’Arrabbiata
6.1 Ingredients
6.2 Instructions
6.3 Notes

The “angry” pasta (arrabbiata translates to angry) from Lazio is one of the traditional favorites around Italy, and the rest of the world. Although it seems very simple, basically tomatoes and chili peppers, it is a classic that still needs a bit of attention to perfect.

Let’s start by discussing the different components that are key to a good Penne all’Arrabbiata; the Pasta, the Tomatoes, and the Chili.

As can be guessed by the name, you will most commonly see Arrabbiata sauce paired with the pasta shape known as penne. Penne dried pasta that looks like a small tube that is diagonally cut on both ends. Basically, it looks like the nib of an old-fashioned quill pen.

While most trattorias in Roma will use smooth penne, or penne lisce, you may find that penne rigate are able to hold onto the sauce even more effectively, ensuring loads of flavor in every bite.

Any high-quality ripe plum-style tomato will probably work, though they will be a lot more work to prepare (blanch, deskin, deseed, and then chop). This is a dish that really calls for canned tomatoes.

San Marzano are ideal if you can get them as they have a sweetness that balances beautifully with the heat of the chili. Likewise, you can also use Passata if you have a bunch in the pantry (though you may find the sauce a little too thin, some tomato chunks are nice to have).

While the chili may be the defining characteristic of this tomato sauce, Arrabbiata doesn’t call for an obscure or unique variety of chili pepper. Simple red chili pepper, preferably dried and flaked, is all that is needed. Calabrian chili will give you the right kick.

Some recipes will call for fresh chilis, but this can give a very fruity note, rather than the earthy spiciness that dried chili gives. This sharper spice is what balances so wonderfully with the sweetness of the tomatoes.

If you wanted to mix it up and go non-traditional you could even try a chipotle or ancho chili, though that starts to veer away from traditional Italian into a fusion style mixing Italian with American Southwestern flavors. It’s not wrong, but it’s not “right” either.

That can’t be it though, can it?

Okay, so there are a handful of other ingredients like garlic, olive oil, and fresh basil or parsley if you want for garnishing. But that’s all there is to it, and with the exception of the herbs are all likely already in your kitchen.

It really is a very simple sauce over dried pasta. If you want to spice up your weeknight meals with a dish that is full of classic Roman flavor, but don’t have a lot of time, this is the one to pick.

Penne all’Arrabbiata pairs well with young, fruity red wines like Montepulciano, Barbera, or Nero d’Avola. You want to avoid anything too alcoholic though as the spice from the chili will make the wine feel a little too “hot” in your mouth. 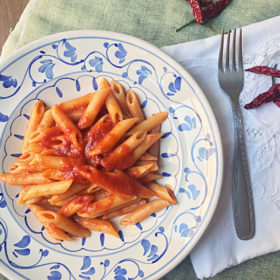 The “angry” pasta (arrabbiata translates to angry) from Lazio is one of the traditional favorites around Italy, and the rest of the world. Although it seems very simple, basically tomatoes and chili peppers, it is a classic that still needs a bit of attention to perfect.
5 from 7 votes
Print Pin Rate Save Recipe Recipe Saved!
Course: Pasta
Prep Time: 5 minutes
Cook Time: 30 minutes
Total Time: 35 minutes
Servings: 6 servings
Calories: 338kcal
Author: Nonna Box

Opinions are mixed on whether grated cheese should be served on top of Penne all’Arrabbiata. In the end it is a personal choice. If it is something that you want to add to your dish, then we recommend Pecorino Romano. Additionally, some mince the garlic and leave it in the dish, if you really like garlic this is okay. This is a traditional dish that can be modified easily to suit your family’s preferences.
Liked this recipe?Follow us NonnaBox for more!