Quick Navigation show
1 HOW IS MOZZARELLA CHEESE MADE?
2 THE OTHER INGREDIENT: THE TOMATO
3 Caprese Salad Recipe
3.1 Ingredients
3.2 Instructions
3.3 Notes

If I was forced to choose a favorite Italian cheese, I’d leave the room because it’s impossible so I’d have to choose a top 20 and, without doubt, good mozzarella will be one of them.

Whilst many people believe that this cheese is essentially a generic term for a number of Italian cheeses, as far as I’m concerned, they’re all wrong because Antonio who knew everything about Napolitan food, said so. There is only one mozzarella and that’s the perishable cheese made with the milk of the black water buffalo and it’s best eaten on the day that it was made (di giornata).

HOW IS MOZZARELLA CHEESE MADE?

Simple as that. The name originated in Campania and it comes from a process called the mozzatura (cutting off) of the cheese. Whilst scamorza, meaning shirtless (scamozzata), is a similar cheese, it isn’t mozzarella. Bartolomeo Scappi first spoke about the cheese in his 1570 Opera dell’arte del cucinare, written while he was Pope’s Pius 4 & 5’s chef.

The cheese is made by separating the milk using rennet as with all other cheeses. The curds this process produces are roughly chopped into pieces, heated to about 80 – 90 C (180-200 F) and then the cheesemaker starts to stir and knead the steaming mass until it forms an elastic paste that he can draw out into long threads (which is why it’s known as a pasta-filata cheese) that will be divided into equal portions of paste; these are then divided into balls, plaited (which I don’t like because it totally destroys the eating experience) and other shapes.

Because the cheese is so popular, it’s made with cow’s milk as well which is (or should be) called fiordilatte or fior di latte (a milk flower), depending where you find yourself in Italy.

The black water buffalo are kept in large herds mainly on the plains of the Volturno river north of Naples and in the triangle between Paestum, Eboli and Salerno and has, since 1993, been recognized as an official DOC product.

Today it’s also made in Lazio, Foggia and Apulia and you need to look for the quality mark when you’re buying. Provolo is the smoked version but Caciovallo is made from cow’s milk but it’s good and if left long enough, can be grated much like Parmigiano Reggiano or pecorino Romano.

THE OTHER INGREDIENT: THE TOMATO

Neapolitans have this love affair with the tomato, more particularly the San Marzano plum tomato that’s grown in the Sarno Valley between Naples and Salerno and of course those grown on the slopes of Vesuvius.

The volcanic soil & loads of water produce a tomato with a flavor that you’ll never forget. It took the Neapolitans a long time to accept the tomato and if it wasn’t for the Bourbon chefs, they probably wouldn’t have.

Neapolitans can be stubborn that way but ironically Campania became the first area in Italy to plant them and they grew like mad. Soon tomatoes were included in almost every meal.

Today, San Marzano tomatoes have PDO status due to the unique flavor; they’re sweet yet tart with an elongated shape, flesh with few seeds or fibers and the skin is peeled off easily. So when you’re in the supermarket next and you need to buy tins of tomatoes, look out for the Italian San Marzano. You wont be sorry. 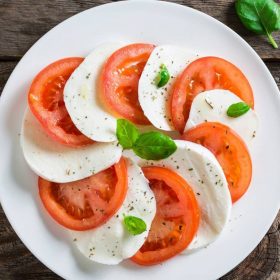 This is all, nothing else, no pesto, no beetroot, no rocket and certainly no vinegar or any other odd things.
Liked this recipe?Follow us NonnaBox for more!

One Response to “Caprese Salad Recipe with Buffalo Mozzarella”