A great example of authentic Italian cuisine is pasta in tomato-based sauce. In this article, we shall be looking into a Pasta Al Pomodoro recipe. It is simple to make and only requires basic ingredients. But before we get to the scrumptious part, let us first discuss some basic factoids, shall we? 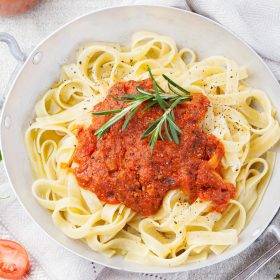 If you are just a beginner or still unsure of how to recreate this authentic Italian pasta dish, here are few tips that may help you out.

Pasta al Pomodoro recipe is a quintessential Italian dish. It is quite simple to make, uses fresh ingredients, and is a veritable feast to the palate. However, keep in mind that the quality of the sauce depends on the quality of the tomatoes you are using. So be conscientious when picking ingredients.

If you want, you may also adjust the taste by adding sugar, salt, and other spices you prefer.

Lastly, like most Italian dishes, it is best enjoyed with family and friends.

What is Pasta al Pomodoro?

Originating from Italy, Pasta al Pomodoro is an Italian dish prepared with the most basic ingredients. Among its main ingredients are fresh tomatoes, olive oil, basil, and spices.

Compared to other pasta dishes, especially those with heavy sauces, this recipe is certainly a light dish that is quite easy to cook.

Now, the word Pomodoro actually means “tomato” in Italian. In fact, a rough translation of the recipe’s name is “pasta in tomato sauce”. So it’s not actually difficult to figure out that tomatoes are the star ingredient in this pasta dish.

There is some debate as to the origin of the Italian word for tomato. Some say it comes from the word pomi d’oro, which means “golden apple,” referring to its shiny red hue.

Others say it comes from the word pomo di moro, which means “fruit of the Moors,” referring to the Arab people that historians believe to be responsible for bringing tomatoes to the Italian peninsula.

And that over time, as what happens in most languages, the word evolved and was finally shortened to the word that most Italians call tomatoes today, which is pomodoro.

But what about the plant’s English name then? Where did the word “tomato” actually come from? Well, when the tomato was first brought to Europe, they came along with tomatillos.

Tomatoes and tomatillos are botanically related and actually belong in the same family, called Solanaceae. You may consider them as cousins in the Plant Kingdom.

Tomatillos, much like tomatoes, come in a variety of colors that can range from light yellow to green to purple. But one big difference between the two plants is that the tomatillo fruit grows inside a thin papery husk. As the fruit inside matures, the husk turns from green to brown.

And when the fruit grows to its maximum size and ripens, husk dries up and breaks open. Also, tomatillos are much more acidic than tomatoes.

Now that you have some background on how it got its many names, let’s examine next where these yummy red berries actually originated and how the recipe came about.

A Bit of History: The Origins of Tomato in Italy

If you are a fan of Italian cuisine, then you’re probably already aware of the fact that the tomato is one of the staple ingredients in most, if not all, Italian pantries.

But do you know that the tomato plant is not originally from Italy, or even Europe, for that matter. According to historians, the earliest tomato plants actually come from Central and South America. And the natives called it tomatl.

So how did this delicious veggie-fruit come to Europe? It’s quite simple really. It was brought to the European continent by European explorers, particularly Spanish conquistadors.

At that time, Spain colonized much of South America, particularly Peru. And they brought many natural resources they discovered from there back to their homeland.

However, the tomato was not originally utilized as food but rather as decorative or ornamental plants. In fact, it was mostly used as a tabletop decor in Florence when it first arrived there.

This was probably because many Europeans thought that tomatoes were poisonous. Why?

Well, it’s because the tomato plant is actually a member of the Nightshade family (otherwise known as Solanaceae), most of which are known to be poisonous. In fact, tomato leaves are actually slightly poisonous. The fruit of the plant, however, is completely edible and can be quite a tarty, or sweet, surprise to the palate.

Now, according to historians, tomatoes first came to Italy by way of Tuscany. In fact, the earliest records of tomatoes being shipped to the country was for the grand duke of Tuscany, who was Cosimo de Medici. And soon after, the tomato plant quickly thrived under the Mediterranean climate and soon it spread all over the Italian peninsula.

Not long after, around the late 17th century, tomatoes started becoming an ingredient in local dishes. In fact, a Neapolitan cookbook published in the year 1692 contained recipes with tomatoes among their ingredients.

And thus traditional dishes such as Pizza Margherita and Pasta al Pomodoro using these fresh round berries from South America was born.