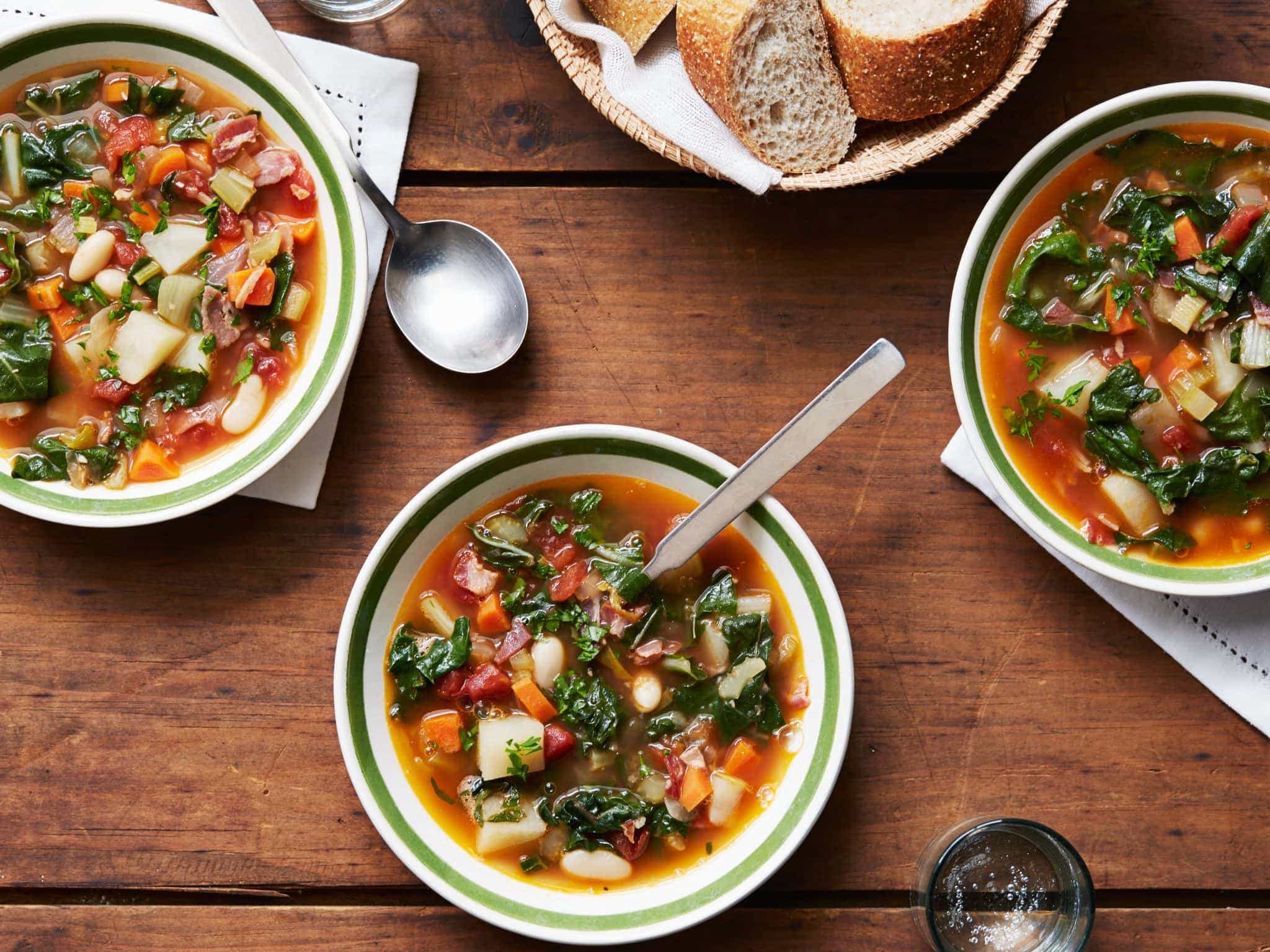 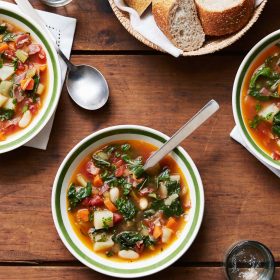 We’ve already talked about Italian soups before, like the famous Italian wedding soup, which, as we established, is not that related to weddings as people might think. But now it’s time to tackle another famous Italian soup—the minestrone. Maybe unfairly, this soup doesn’t have the popularity of other dishes, although things are starting to change. It’s fairly understandable when you think about it. I mean, soup with vegetables (because that’s what the minestrone soup is) doesn’t sound like something you are eager to order in a restaurant.

IS MINESTRONE WORTHY OF OUR ATTENTION? 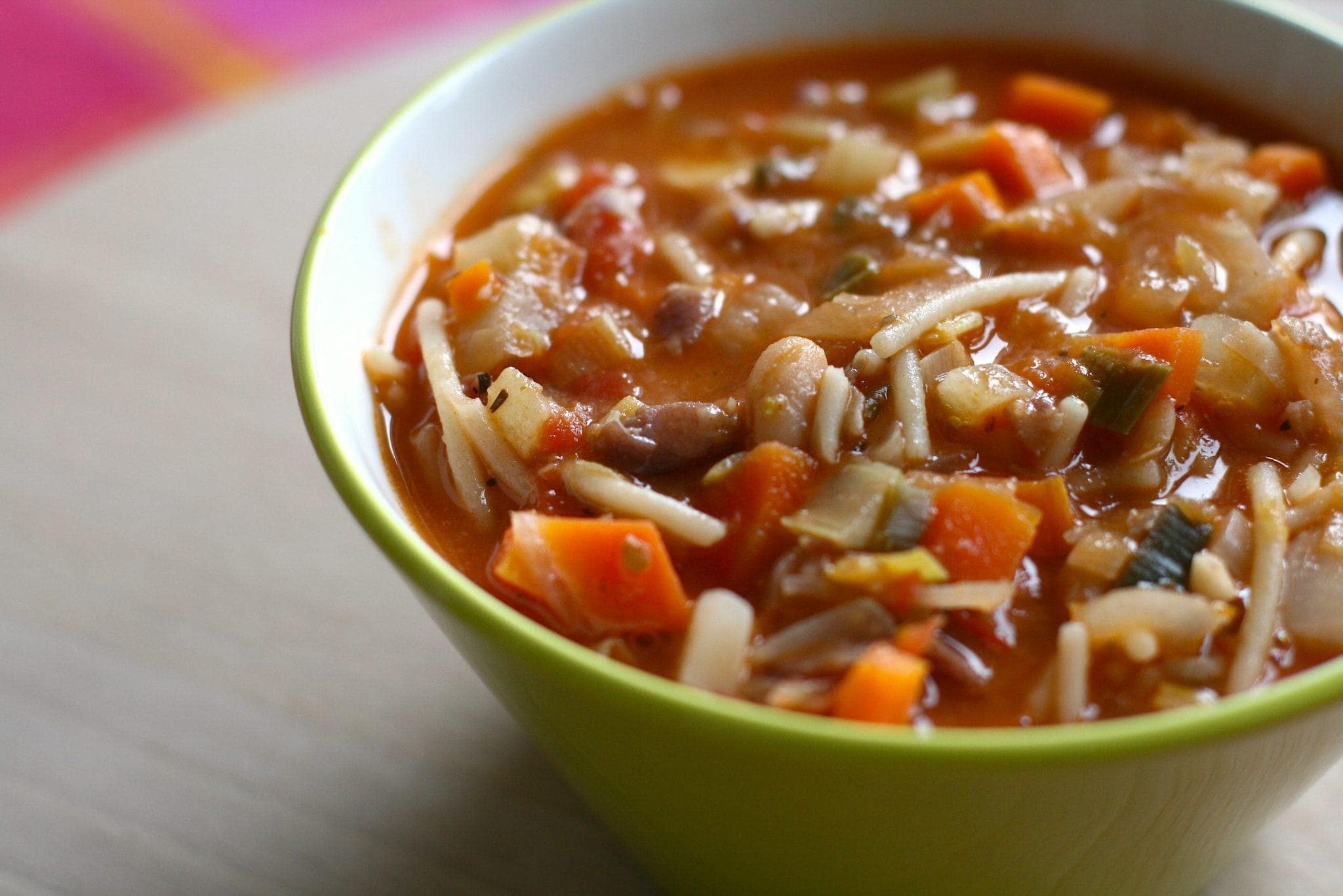 In the collective imagination, minestrone is seen as a not-so-delicious soup, with not enough flavors to make it recommendable. Actually, to closest way to describe it would be a cleansing soup, meant to be eaten after you’ve been stuffed with other food, because it’s so light and kind to your poor stomach. So our mission is to change that perception and show you that your taste buds can find pleasure even in these soups which are flying under the radar.

Generally, an authentic Italian minestrone soup recipe needs many vegetables, including potatoes, carrots, celery, tomatoes, spinach, pumpkin, mushrooms, and sometimes even seeds like peas, beans, chickpeas, or grains like rice or pasta. So in a way, it’s not too different from the wedding soup, as if you feel like it, you can even add bits and pieces of pork meat (lard or bacon to blend in with the soup) or meatballs.

This is part of this soup’s charm—that you are not getting an exact recipe of what to use and in what quantities. So while it sounds simple to make, the challenge lies in the preparation, as it takes considerable time to clean and chop all the vegetables. This might make many people give up and just get a canned soup instead, but it’s worth the effort.

As we said, there is no definitive authentic Italian minestrone soup recipe, because as the dish spread throughout Italy and even outside of Italy, the variations are based on seasonal and geographical differences. As Italians proved to us, anything can make a soup, to the point that minestrone actually exists in the dictionary with the meaning of “combination of things.” Sounds appropriate, right?

WHAT’S THE HISTORY OF THE MINESTRONE SOUP? 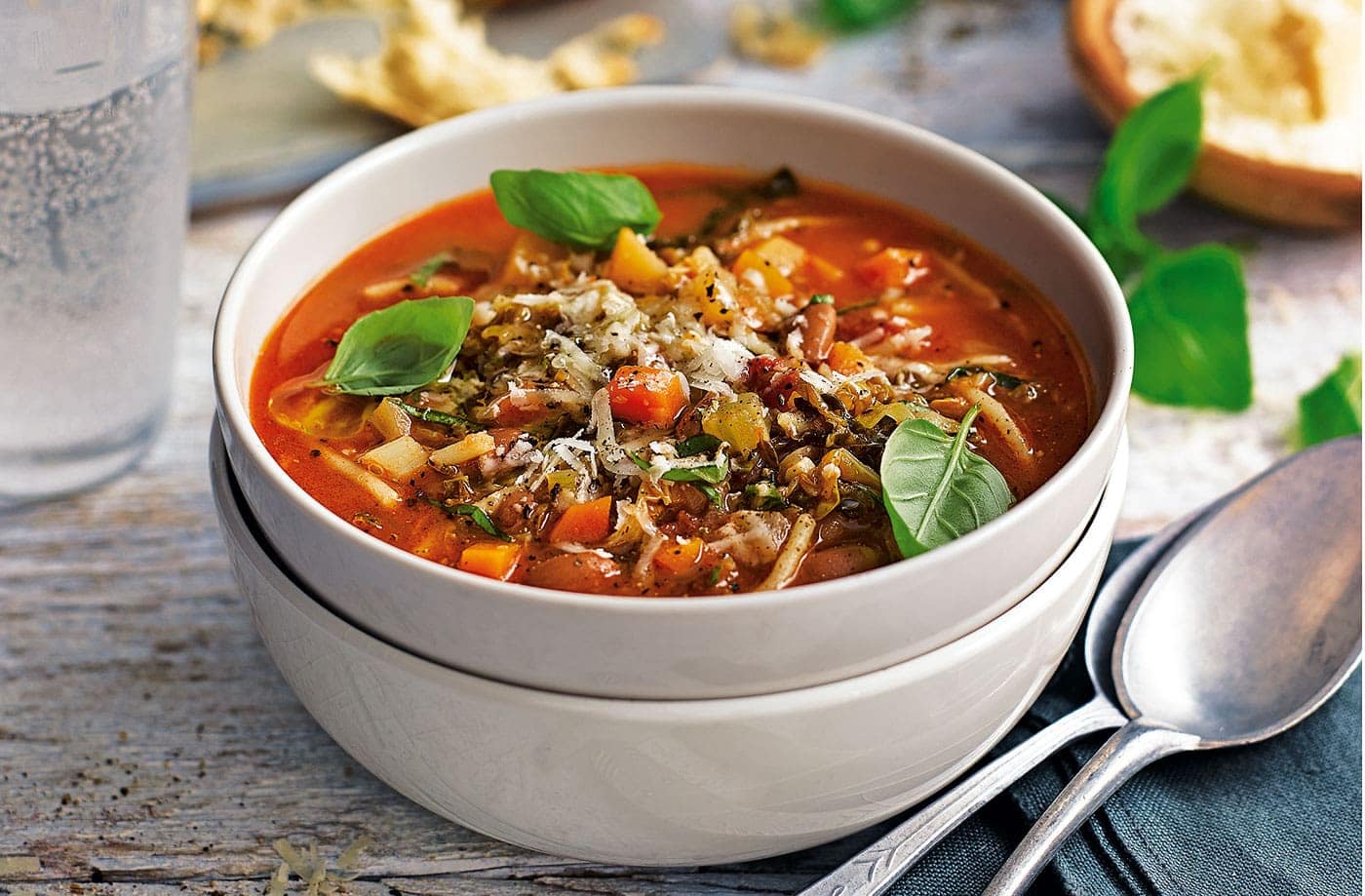 The history of the minestrone dates back to ancient Rome, where initially, fewer vegetables were used to prepare it. The basic recipe consisted only of ingredients like onions, carrots, mushrooms or asparagus, which would be all boiled in water. Once again, this dish is a testament to the creativity of the Italians, who time and time again proved that even the most basic ingredients in your kitchen can turn into something special. That’s why I have so much respect for dishes like minestrone or minestra maritata or even pasta—people just used whatever they could find, combined all the ingredients in an edible way, and thus, contributed to Italia’s culinary history.

In time, more ingredients have been added to the recipe, thanks to the expansion of the Roman Empire, like potatoes and tomatoes. The entry of these ingredients in Italy was also helped by the development of the New World. It took some more centuries for the dish to gain notoriety, reaching its peak between the seventeenth and eighteenth century, when the Italian chefs were making this recipe known outside the country. Because of its practicability and relative cheapness, today, the soup is regarded as “cucina povera”, meaning “kitchen of the poor” and is eaten as a main dish.

WHY IS IT CALLED MINESTRONE?

For many people who have not heard about this dish before, the first idea that probably comes to mind is pasta. It sounds Italian and pasta is one of the most globally recognized food associated with Italian cuisine. So it does sound like a logical assumption. Of course, if you grew up eating Italian food, you’d probably be aware of the dish as a child but if you didn’t, you’d most likely be surprised that it’s actually a vegetable soup. So how exactly did this soup get its name? Let’s find out.

Now there are many versions of the recipe but one thing the traditional ones have in common is the use of leftovers from previous meals. And since this dish is made by combining small leftover portions of full meals to be cooked into one large soup dish, it was then dubbed minestrone, which means “small things combined to make one large dish”.

ZUPPA OR MINESTRONE OR MINESTRA—WHAT’S THE DIFFERENCE? 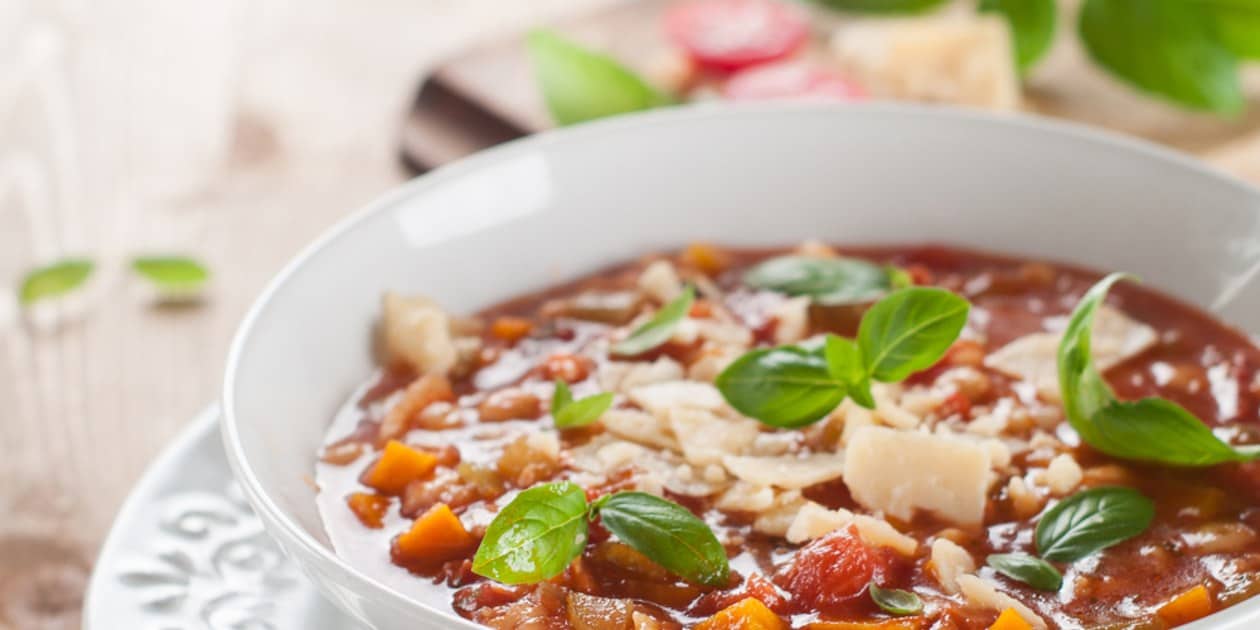 This might seem confusing, but bear with us—we’ll explain everything. Creamy? Liquid-y? Velvety? It’s unquestionable that each of the three has their own charm and is immensely popular, but it might be a bit difficult to recognize them and correctly label them. But here’s what you need to know. Minestra is what started it all, as it came into the scene centuries before zuppa did. Like we mentioned, minestra was the soup of the poor and was most of the time, the only meal of the day.

Today, minestra refers to any first course which includes vegetables and grains cooked as a stock. Minestrone is in fact included in the minestra family, being just another variation of it. What makes the minestrone stand out is its thickness, as it always has to include an ingredient meant to make the soup creamy, like beans, pumpkin or squash. Zuppa meanwhile has no grains in its composition—no rice, no pasta. It mostly consists of broth and it’s eaten with bread. However, between the zuppa and the classic minestra, minestra had more of a liquid consistency. 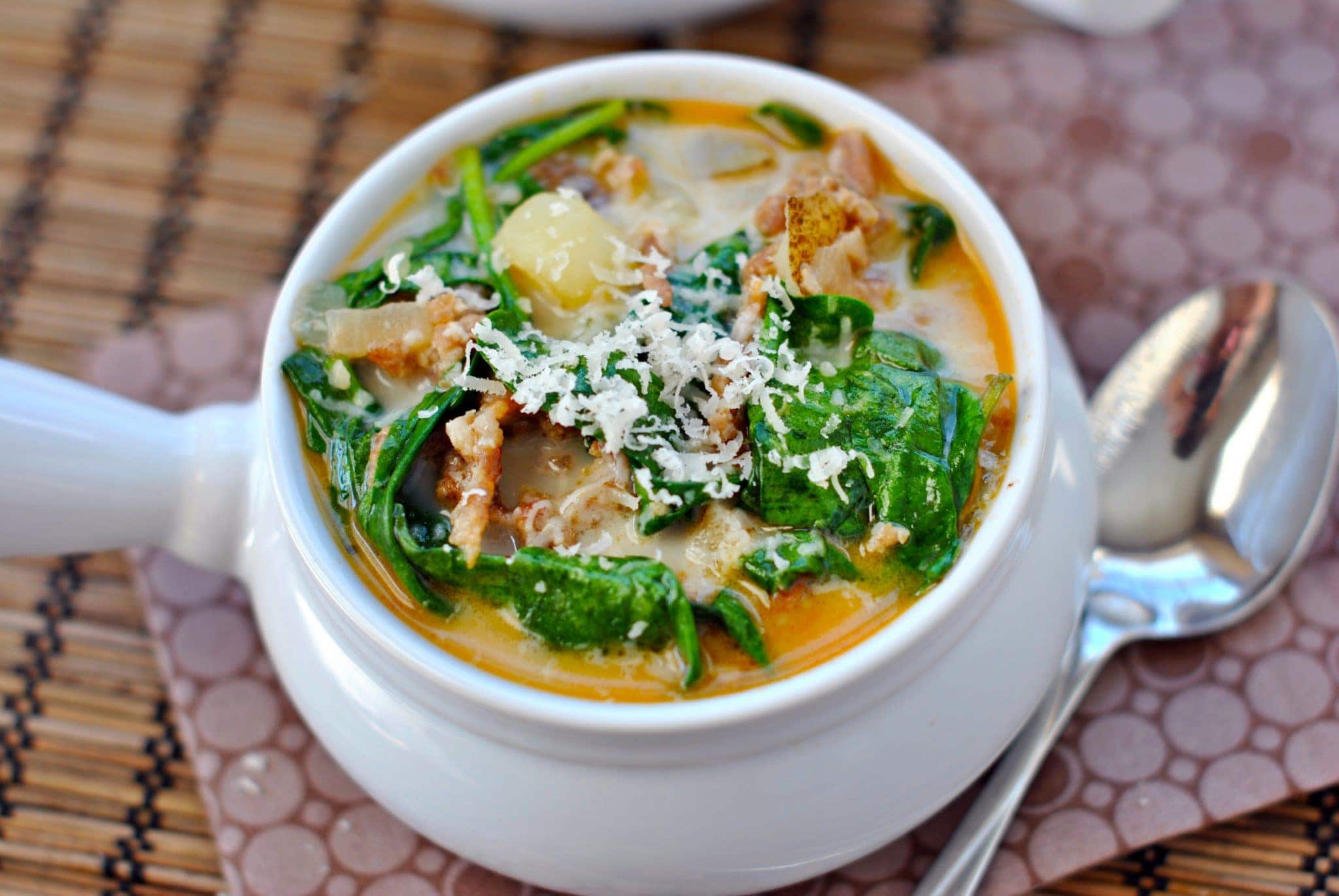 You are probably familiar with zuppa, as it’s a term easily recognizable in other European languages as well. It’s derived from suppa, which stands for the slice of bread which would be placed in bowls before pouring the broth.

As mentioned above, minestra originates from the verb minestrare, meaning administer, as it was traditionally served (“ministered”) by the householder. All the soups use more or less the same vegetables, which, as mentioned earlier, are chosen based on region and period. Zuppa is very common in the central and southern regions of Italy, especially Tuscany, where black cabbage can’t miss from any composition. In Calabria and Sicily beans are very common, as it also happens to be one of the ingredients contributing to the minestrone’s thickness. Sardinia is famous for its cheese, so it’s no surprise that they also eat their soup with cheese.

The zuppa generally has a more dense and consistent aspect than the classic minestra, because it needs less broth for its preparation and the addition of bread and croutons makes it drier. Thanks to its many nutrients, the zuppa is considered to be a full, rich meal.

Minestra however, is more liquid, depending on the broth used, and it is consumed mainly in Northern Italy. In the Lombardia region, rice is frequently added, while in Veneto and Emilia Romagna, minestra is eaten with pasta and even scrambled eggs.

Once America stepped in and more ingredients became available, minestra gained a more thick consistency, enriching the taste of the herbs and vegetables used until then.

The difference between smooth and mixed vegetables soup is very simple. The soup is made only by two, maximum three, types of vegetables. Traditional pairings are: potato-leek, zucchini-potatoes, carrots-potatoes. A smooth, velvety soup will always have that extra ingredient which will bind all the vegetables together, like egg yolks.
A vegetable soup is just that—a soup with no pasta, but occasionally including rice blended with a mixer, mainly used for those people who don’t like seeing big chunks of carrots or other vegetables on their plates. Yes, kids, we are looking at you.