In Trentino-Alto Adige, Christmas smells like a zelten fruitcake baking in the oven. A rich, festive dessert filled with nuts and candied fruits, there is no one “true” recipe for this seasonal favorite, because every family has its own traditions and cherished ingredients.

Zelten is a festive fruitcake from Northern Italy filled with nuts and candied fruit and traditionally served during advent. There is also no single form or look to the zelten cake, because each baker can choose to make their preferred shape, such as a heart, round or square shape and cakes can be large or small. With the same recipe, you can choose to make one large cake or several small ones. There are also cakes that are more dense and compact with tons of candied fruits and nuts, while other cakes are lighter, with more flour and egg and less of everything else.

What are the most important ingredients for zelten?

One thing is for sure, there are lots of ingredients that go into making zelten. There is a huge variation depending on the recipe you follow, but the ingredients you are most likely to find are:

And then, in the Sudtirol version of the recipe there are lots of spices such as:

To make the zelten recipe you will need a hand mixer, several large bowls, a baking pan and a small sauce pan as well as a few mixing spoons. It is also very handy to have an electronic kitchen scale to weigh all the various ingredients – be prepared, there are lots of them!

Steps for making zelten fruitcake like a true Italian

If you want to make zelten like a true Italian, you should: 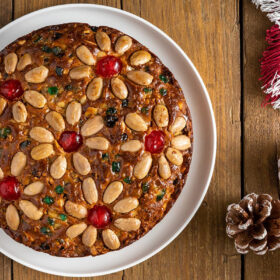 How can I store zelten fruitcake?

Zelten fruitcake is a great gift because it can be stored for a long time without spoiling, even a few weeks if kept in an airtight container or covered with saran wrap. The more alcohol that is used when making the fruitcake, the longer it will last. In some places, fruitcakes are wrapped in alcohol soaked linens and can be stored for years.

Is zelten the same as fruit cake?

Lots of different cultures have fruitcake of some sort. It spread all over Europe to places like Italy, Germany, Bulgaria and England and on to the new world, arriving in Chile, the United States, Canada, the Bahamas and beyond. Even India and the Philippines have their version of fruitcake.

When and why was zelten traditionally made?

Traditionally, zelten cakes were made during Advent, specifically on December 13th, and often prepared by the young women of the household who would then give a zelten cake to their future husband and his family as a gift. Another tradition was to have the young women of the household make the cake on December 21st to ask Saint Thomas for fortune in love. The girls’ mother would bless the cake and put it away for the family to eat after Christmas Eve Mass

I hate candied fruit, what else can I put in my fruitcake?

If you don’t like candied fruit, you can simply leave it out of the fruitcake recipe or substitute with more nuts or raisins. If you have a serious chocolate addiction, or just want to try something different, you could add dark chocolate chips in place of candied fruit for a twist on the original fruitcake recipe.