Quick Navigation show
1 What is a strudel?
2 History of strudels
3 Variations of strudels
4 Pear, hazelnut and chocolate strudel
4.1 Ingredients
4.1.1 For the dough:
4.1.2 For the filling:
4.2 Instructions
290 shares
Recipe Print

What is a strudel?

The term “strudel” refers to a pastry made from rolled dough with different fillings, which is very common in Central Europe, Bohemia, and, in Italy, in the territory of Trentino Alto Adige, Friuli Venezia Giulia, and Veneto. The most common recipe is a sweet one, filled with apples, pine nuts, and raisins.

The first mention of strudels dates back to the eighth century B.C., in the Assyrian area, and a few centuries later, similar sweets were also found in Greece in the third century B.C. Apples were missing, but there were fillings of dried fruit and nuts wrapped in a layer of pasta. The recipe has changed over time and diversified into various preparations: baklava, güllaç, börek.

It can therefore be assumed that the strudel has Turkish origins and derives from different recipes and different ancient places, even if the dessert that is closest to it is certainly baklava, a Byzantine dessert made up of a phyllo dough wrapper with a filling of sugar syrup and dried fruit.

The Ottoman Empire popularized the recipe until, for the first time, baklava took the rolled shape and different fillings, including fresh fruit-based ones. When Hungary was again annexed to the Austrian Empire, this dessert also spread to that part of Europe, inextricably linked to the name strudel, by which it is known today.

The apple-based filling is almost contemporary and is linked to the large production of this fruit in those areas. Not surprisingly, it was this filling that took over in Italy, despite the many other variants in Central Europe, thanks to large crops of apples from Trentino-Alto Adige.

The first thing that differentiates one strudel from another is definitely the dough. There are different types:

In addition to the different types of dough, we also find a great variation of fillings.

For sweet strudels, in addition to the famous apple strudel with pine nuts, raisins, and cinnamon (typically made with Golden Delicious apples), we can find apricot and ricotta, cherry and hazelnut, pear and chocolate, pear and ginger, currant and ricotta, and grape, mascarpone, and rhubarb.

For savory strudels, you can taste the classics with stuffed vegetables and cheese, asparagus and prosciutto, fish steak, lamb fillet, or sauerkraut and sausage. A salty strudel can be served both as an appetizer and as a main course.

Now that you know about the origins and various types of strudels, it is time for the recipe. This pear, hazelnut, and chocolate strudel is prepared with pulled dough, or crazy dough, with a delicious filling that has nothing to envy from its progenitor apple strudel. 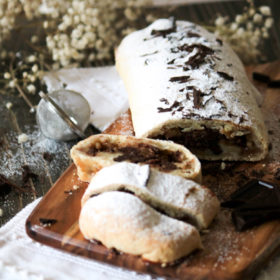 Liked this recipe?Follow us NonnaBox for more!
290 shares

2 Responses to “Chocolate and Pear Strudel”