Kaiserschmarrn is a lightly sweetened shredded pancake that often contains raisins and is served with applesauce or berry compote or jam. It can be found in Trentino-Alto Adige, but originated in the royal kitchens of Austria, according to legend. This dish is typically served as a dessert, but makes a delicious and filling breakfast, lunch, or snack any time of the day.

The kaiserschmarrn messy and fluffy pancake (which is definitely not the perfectly round pancake we are used to seeing!) is broken apart or ripped as it is being fried in a pan. It is then cooked with sugar until it has caramelized and sprinkled with powdered sugar and served with fruit jams or preserves.

Where did Kaiserschmarrn get its name?

The dish is said to be named after the Austrian Emperor (Kaiser) Franz Joseph I, for whom the dish was first prepared. There are many different stories that have been told as to how and where the dish was actually invented.

What do you need to make kaiserschmarrn?

Luckily you don’t need any special equipment to make kaiserschmarrn: a mixing bowl, a whisk and a frying pan are really all that is necessary.

The ingredients for kaiserschmarrn include: flour, sugar, milk, eggs, rum, butter, powdered sugar and your favorite jam or compote. Because the ingredients are so basic, the better quality they are, the better your kaiserschmarrn pancake will taste. So, when possible, find a local dairy with whole milk, eggs and butter and splurge on a high-quality fruit compote from your local farmers market made with the best local fruit from your area. 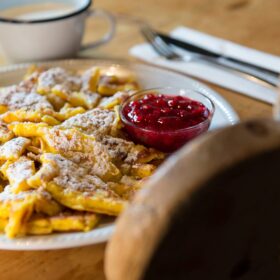 What are the various toppings/dippings for kaiserschmarrn?

How was kaiserschmarrn invented?

One of the stories of how kaiserschmarrn was invented recounts that the Emperor’s wife wanted a light dessert and so one of the royal chefs prepared kaiserschmarrn, however it was not to her liking because she felt it was still too rich. Her husband ended up eating his own portion and loved it so much he ate his wife’s portion as well! His enthusiasm for the dish earned it the name “The Emperor’s mess.”

Another legend says that the Emperor and his wife were traveling through the mountains when they stopped at a local farmer’s house for a meal. The farmer got all the best ingredients he had on hand and made a rich pancake, but he was so nervous about cooking for the royals that he scrambled the pancake while cooking it. To cover up the disastrous looking dish, he added sugar and plum compote on top. Luckily the Emperor loved it!

Is kaiserschmarrn a breakfast pancake or dessert?

When people hear the word pancake, they might instantly picture a breakfast or brunch dish, but the kaiserschmarrn messy pancake is traditionally a dessert.

Originating in Austria, the dish can be found in many Alpine locations, in small huts or mountainside restaurants, to enjoy after a day of skiing the slopes or playing in the snow.