There is a restaurant in Naples called Limoncello and today we pay tribute to them – the food is always excellent, the pizza bianca they serve before the meal out of this world and they make the best grilled calamari around. They also make brilliant Limoncello and few people leave without having, at least, one.

There are many legends about the origin of limoncello – one has the liqueuer originating around 1900, in a boarding house of the island Azzurra, where Maria Antonia Farace culitivated her oranges and lemons with care.

After the war, her nephew opened a bar nearby and he served this liqueur made according to Farace’s recipe.  In 1988, a relative, Massimo Canale began producing limoncello and registerd the trademark.

Another sees the important families on the coast of Sorrento (again around 1900) serving it to their guests in the morning according to their recipe and in Amalfi it is believed that the recipe is much older than that.

It is, however quite probable that it was made by many of the local families in order to utilize the glut of lemons in the Naples area, particularly by the monks in the surrounding monasteries. Be that as it may, it’s delicious and this cake equally so.

Check out our limoncello recipe too! 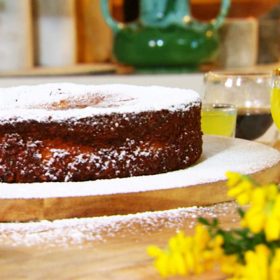