Panettone Recipe – The History, The Legend and The Deliciousness

Quick Navigation show
1 Where was Panettone Originated?
2 The little Legend about Panettone
3 Panettone Recipe
3.1 Ingredients
3.2 Instructions
4 How do you eat panettone?
5 Should panettone be refrigerated?
6 Does panettone expire?

There’s no doubt that my favorite panettone is the Poli and and the best spumante I can think of is the Giulio Ferrari, Riserva del Fondatore which is why, if you can get hold it, it’s the Christmas gift to give any Italian. And me.

If anyone needs to know where to deliver mine, just shout. I love the stuff & can eat panettone until the cows come home.

Before we dive in the panettone recipe, here’s a bit of information about this traditional and delicious Italian classic.

Where was Panettone Originated?

For a little background: panettone originated in Rome when the ancients made a leavened bread that tasted pretty much like the panettone of toda; the word comes from the Italian word “panetto” which is a small loaf of bread.

The little Legend about Panettone

There’s a sweet legend about this cake (or bread?) and it tells of a nobleman, Ughetto Atellani, who fell passionately in love with Adalgisa, the baker’s daughter.

The story’s a little confusing but, in short: in order to get the object of his passion to fall in love with him, Ughetto pretended to be a baker and created this enormously rich bread for her.

When he asked permission to marry her, the famous Duke of Milan, Ludovico il Moro (of risotto fame) agreed to the marriage and when she  finally tied the knot, she did so in the presence of Leonardo da Vinci.

Said bread was named after her father, Toni as a sign of respect and so pan di Toni became panettone.

The true story? There were two hard working bakers from Milan who started baking these cakes in the early 1900′s. They baked large quantities for distribution throughout Italy and in 1919 Angelo Motta, then in full swing, gave the cake it’s traditional dome shape.

The Poli that is wickedly enriched with a grappa cream, the grappa made in an artisan distillery at Schiavon near Bassano di Grappa in the Veneto region. 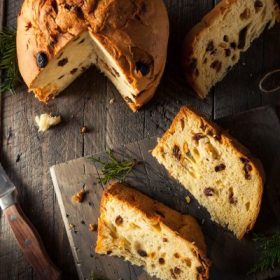 How do you eat panettone?

There are many ways to eat panettone, but here are the three most popular ways. First is to eat it with coffee for a quick breakfast. You can also have it as a midday snack with a glass of Italian wine. And lastly, cap a lovely dinner with sparkling white wine and a slice of panettone with whipped cream filling.

Should panettone be refrigerated?

Refrigerate your panettone dough after the second proofing in airtight containers and use it in the next five days. You can store the dough for up to three weeks in the freezer. Thaw your frozen dough and allow for the usual rest and rise time when ready to bake.

Panettone actually keeps very well, but it does go stale fast if you don’t keep it properly. You can put it in an airtight container or wrap in clingwrap and it will stay fresh for up to a week in room temperature.