Cannoli cheesecake is a combination of two true Italian classics. You get to enjoy two delicious Italian desserts and never need to choose which to have- you can have them both!

So how did cannoli cheesecake come to be an, most importantly, how can you make such a fantastic dessert?

Those questions will be answered right here! Let’s start by taking a look at cannoli and then move on to cheesecake before combining the two into the mouthwatering dessert you likely are craving already. 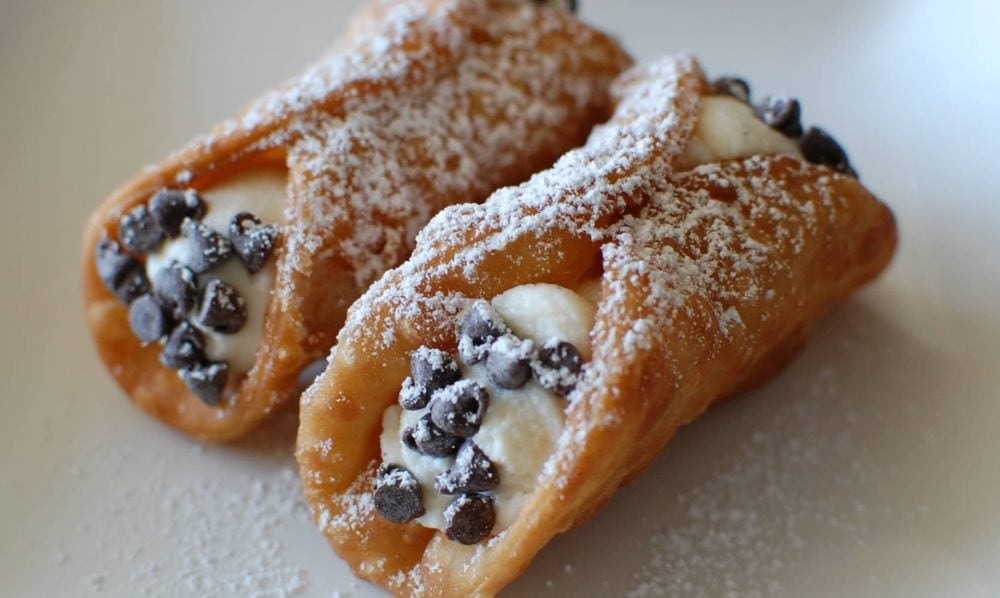 Cannoli is the plural word for cannolo which means “little tube” it Italian. The dessert is now usually referred to simply as “cannoli”, even if there is only one pastry. The dessert is essentially a fried tube of dough that is then stuffed with a sweet cream filling.

The ingredients of the filling may vary depending on where you purchase the dessert or where the recipe you use originated. Cannoli filling can be made with a base of ricotta cheese (the traditional cheese), mascarpone or even cream cheese. Sugar, cinnamon, vanilla, and honey are quite common as well.

After those basic ingredients, the variations can go on and on, making cannoli with nuts, chocolate, candied citrus peel or even pumpkin flavors being added in.

A Little History of Cannoli

Cannoli are one of Italy’s most well-known pastries that were first created in the Sicilian city of Palermo.

It is said that the filling for the dessert began when the Saracens (an ancient Arabic group) brought sugar cane to Sicily. This completely altered how desserts were sweetened as before, most pastries were made with honey.

Cheese was blended with the new sugar, using a recipe based on cassata, another Italian specialty dessert that revolves around ricotta cheese.

Using a tube-shaped shell as the vessel for the sweetened cream is a story that goes back to ancient Roman times. In the first century BC, there is mention of a flour based, cylinder-shaped pastry made from milk.

This is essentially what cannoli shells are! When cannoli began to become popular, the shells were made by wrapping the dough around a sugar cane stalk and then frying it until golden and slightly bubbly.

Cannoli became known as a springtime dessert since sheep produced the most milk during this time, which was then made into ricotta and used in the dessert filling.

In turn, the dessert was popular around Carnevale, a celebration that is very similar to Mardi Gras. Now, the dessert is considered an Italian staple and is available around the world as a sought after, delectable Italian dessert.

What is Cheesecake really?

Now, let’s turn our attention to the cheesecake, another Italian signature dessert. Cheesecake is a rich, dense cake that is made with soft cheese, cream, eggs, and sugar as the main ingredients. The batter of the cake is typically poured over a graham cracker crust and baked.

While many countries have their own versions of cheesecake, the two most popular are “New York Cheesecake” and “Italian Cheesecake”. New York cheesecake is made using only cream cheese to make the filling or main part of the dessert. It is dense, heavy and very rich.

Italian cheesecake tends to be lighter and a little drier, mostly because it is made with ricotta instead of cream cheese. Both versions of the dessert can be flavored to your liking and both are baked in much the same way, using low heat to cook the dessert without burning the cheese.

History of Cheesecake: From Italy to America 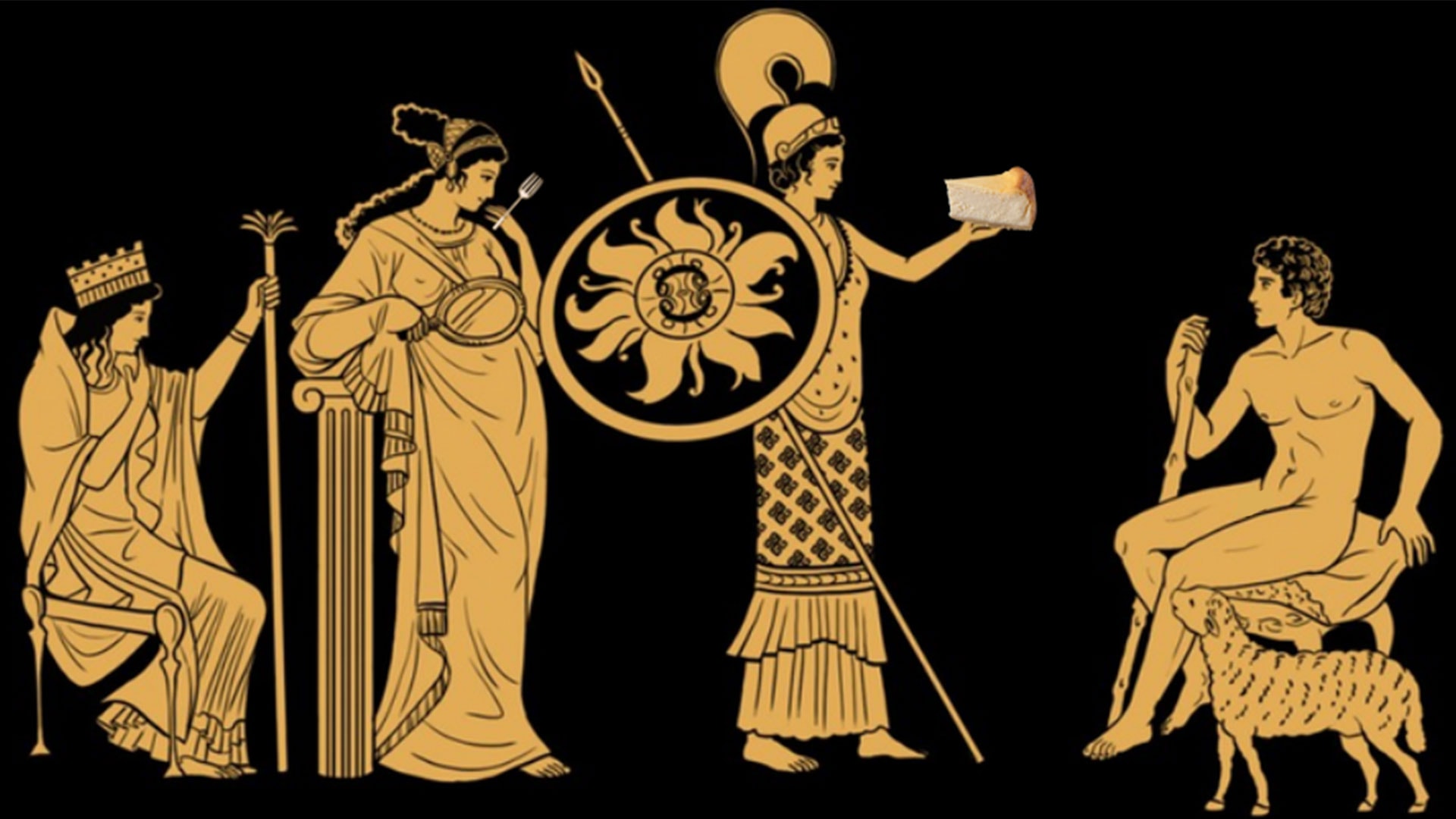 While many people may think of cheesecake as an Italian dessert, it actually originated in Greece. The earliest recipes for Greek cheesecake describe pounding the cheese to make it smooth then adding honey and wheat flour.

When the Romans conquered Greece, they took the recipes for cheesecake with them but, once home, they modified it to include eggs. A version also came about that included layering a crust on the bottom of the cake before baking which is similar to how we made cheesecake today.

In the late 1800s, an American dairy farmer was trying to reproduce the famous French cheese called Neufchatel but accidentally made a denser, creamier cheese that became known as cream cheese. This un-ripened cheese started to be used in sweet applications such as making a cheesecake!

From this point, cream cheese became the popular choice in the Americas for making cheesecake, while many other parts of the world stuck to the classic ricotta cheese.

Both have sugar, ricotta cheese, vanilla and often a subtle flavoring like cinnamon or lemon. Cannoli have a crispy outside shell while cheesecake has a crumbly bottom crust of similar taste.

While one dessert may be baked and the other is not, they are almost identical in every other way! It seems natural that the two desserts should come together to create a cannoli cheesecake!

There is no real origin point as to when cannoli cheesecake was first made but the dessert simply naturally evolved- and we are happy it did!

To start making a cannoli cheesecake, you need to have cannoli shells. You can find pre-made cannoli shells in most grocery stores, Italian specialty markets or any Italian bakery.

The cannoli shells are then ground and mixed with melted butter and sugar, forming the crust of the cheesecake. This cannoli shell crust takes the place of the basic graham cracker crust and lays the foundation for the cannoli properties of the dessert.

The cheese choice is the next essential part of a cannoli cheesecake. Ricotta cheese is an absolute must as that is what cannoli is made of!

Since ricotta is used to make the cake, the final result will be more similar to a Sicilian cheesecake rather than a New York-style cheesecake. This is totally okay as you are making a dessert with a heavy Italian influence! Good, quality, whole milk ricotta must be used!

Cannoli cheesecake is heavy on the sugar but, once again, this is true to the tradition of both desserts that got their start due to the introduction of sugar in Italy.

Regular, white sugar is just fine and will make you think of eating a cannoli and also a traditional cheesecake. Add a little vanilla into the mix and a bit of orange zest (a traditional cannoli addition) and your cannoli cheesecake is ready to bake!

While cannoli cheesecake may not be a true Italian, classic dessert, it is certainly a great marriage between two fundamentally Italian pastries. One bit and you will surely be transported to Italy! Give this recipe a try which offers the perfect marriage of cannoli flavors baked into a beautiful cheesecake. Enjoy!