Today pandolce Genovese is one of the symbols of the city of Genoa, but it is widespread throughout the region of Liguria. And while it was originally consumed on Christmas, New Year’s Day, and Epiphany, nowadays you can enjoy it all year round.

Traditionally, pandolce Genovese was made with yeast, eggs, honey, olive oil, and flour. It featured a generous dose of raisins and was flavored with fennel seeds and orange blossom water.

Over the years, sugar has replaced honey, butter has taken the place of olive oil, pine nuts and candied fruit have joined the raisins, and marsala wine has given an additional aromatic note to the cake.

There are now two versions:

Both types have the shape of a round loaf characterized by three cuts made on the surface to form an open triangle.

There are various theories regarding the origins of this dessert, which are very distant from each other both geographically and chronologically.

According to some, “u pandùce” would be the natural evolution of an ancient Genoese dessert, “the bread with the zibibbo.” Doge Andrea Doria, in 1500, asked pastry chefs to make a cake that would become a symbol of the city and its wealth and that could last for a long time and endure the adverse climatic conditions that sailors had to face in the long days of offshore travel.

But there are also theories that trace its origins back to the times of the ancient Egyptians and Greeks, based on evidence of sweets prepared with cereals, honey, and spices that were offered to the gods.

In the early 1900s, historian Luigi Augusto Cervetto developed the theory that Pandolce descended from a dessert of Persian origin, paska bread, which continues to be produced even today and has characteristics similar to pandolce.

On New Year’s day, the youngest of the Italian subjects, as a gift of good luck, brought to the king a kind of large cake sweetened with honey and filled with apples and candied fruit, from which a sprig of laurel stood out, as a wish for abundance and prosperity.

This origin would explain the presence of the three cuts on the surface of the cake, symbolizing a kind of triangular crown, and the laurel or olive branch placed on top of the pandolce. Tradition also requires the youngest member of the family to deliver it to the eldest for cutting it. 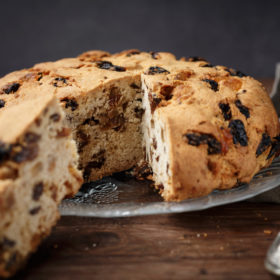 Pandolce genovese is one of the traditional cakes from the Ligurian region of Italy. It is usually served during Christmas time but with this recipe you can enjoy all year long.
4.39 from 13 votes
Print Pin Rate Save Recipe Recipe Saved!
Course: Dessert
Prep Time: 1 hour
Cook Time: 1 hour
Total Time: 2 hours
Servings: 10 servings
Calories: 388kcal
Author: Nonna Box

It is in Liguria that one of the most rare and precious Italian sweet wines is produced: Sciacchetrà. It’s the ideal match for pandolce, thanks to its scents of honey, orange jam, and candied fruit. Alternatively, you can also try the delicately flavored Moscato d’Asti (from Piedmont), or a vino with more intensity, such as Moscato di Pantelleria (Sicily).