What is ’nduja? A guide to this Calabrese delicacy 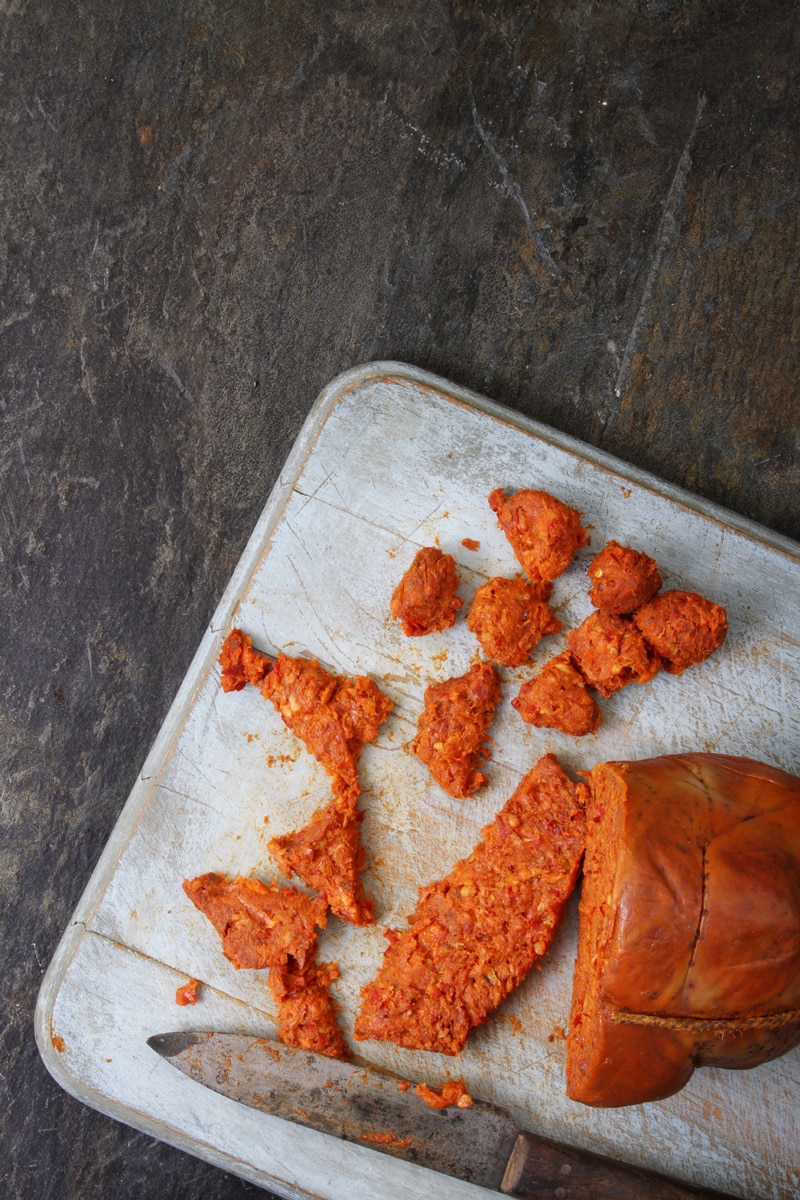 Quick Navigation show
1 What is ‘nduja?
2 The history of ‘nduja
3 Characteristics and production
4 Uses of ‘nduja in the kitchen
3shares

‘Nduja is a type of sausage typical of Calabria and characterized by a soft consistency and unmistakable red color. The name probably derives from the French andouille, or delicatessen, sausage. However, the etymology can be traced back to the Latin inductilia, which indicates elements that are inserted into something or, specifically, sausages. ‘Nduja is enjoyed throughout the region and takes on slightly different names from town to town. In fact, we can find it as anduja, ‘ndugghia or ‘nduda.

The bright red color, needless to say, is due to the presence of the good Calabrian chili pepper. The abundance of this ingredient, which has marked antiseptic properties, ensures that ‘nduja does not need preservatives. Additionally, it is thanks to the presence of this chili that many people think ‘nduja is an aphrodisiac; maybe it’s just a belief, but certainly chili can have beneficial effects on the cardiovascular system.

The history of ‘nduja

According to some sources, ‘nduja was introduced to Calabria by the Spanish around the 16th century; according to other writings, it was imported by the French during the Napoleonic Empire between 1806 and 1815 (which would justify the name andouille). It is said that the then king of Naples, Joachim Murat (1767-1815), brought ‘nduja to Calabria, and that the Calabrians gave the French salami a personal imprint by adding different pork and lots of hot pepper.

Despite the uncertainty of its origins, we can say that this specialty is now part of the historical and cultural identity of Calabria. ‘Nduja was initially made to use slaughterhouse waste such as the spleen, stomach, intestine, lungs and other less noble parts of the pig on the Poro Plateau, specifically in Spilinga, in the province of Vibo Valentia. Subsequently, the production area expanded to many other municipalities, and ‘nduja became very important for the local economy.

In the 1950s, the many Calabrians who emigrated to Northern Italy and the Americas made the goodness of this product known all over the world. 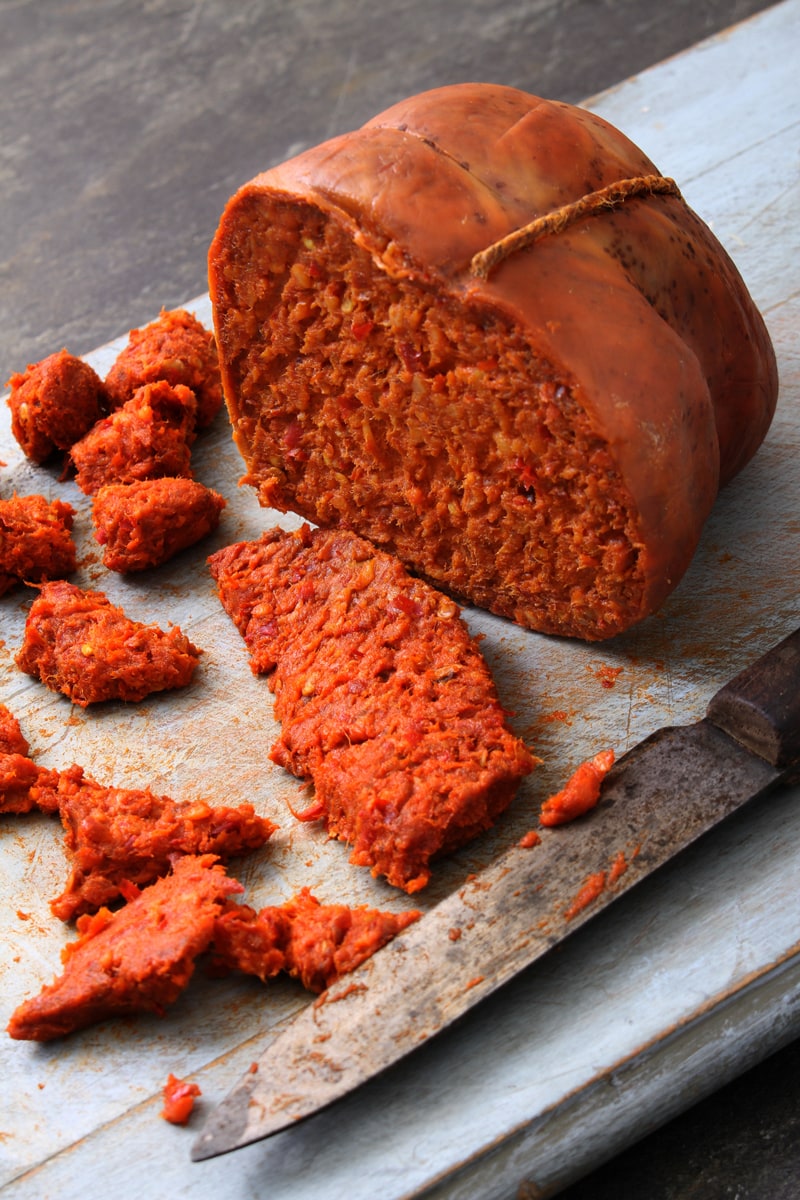 Today ‘nduja is produced in the winter with the fatty parts of the pig and no longer with waste: lard, guanciale, and side bacon (pancetta) are finely chopped and mixed with salt and chili, both fresh and dried, without adding dyes or preservatives. Everything is mixed well until a creamy and homogeneous mixture is obtained.

Once ready, the mixture is inserted into the orba, or the natural pork casing; for this reason ‘nduja is sometimes also referred to as orbara. The most prized ‘nduja — which is handcrafted — involves chili grown in Calabria. For industrial production, imported chili peppers are also used, but if you compare the products, the difference is obvious.

Then follows a phase of light smoking, which involves the use of black locust or olive wood. After the smoking phase, it passes to seasoning, which must take place in a cool, dry, hygienic place and normally lasts from three to six months, depending on the size and weight of the sausage.

Uses of ‘nduja in the kitchen 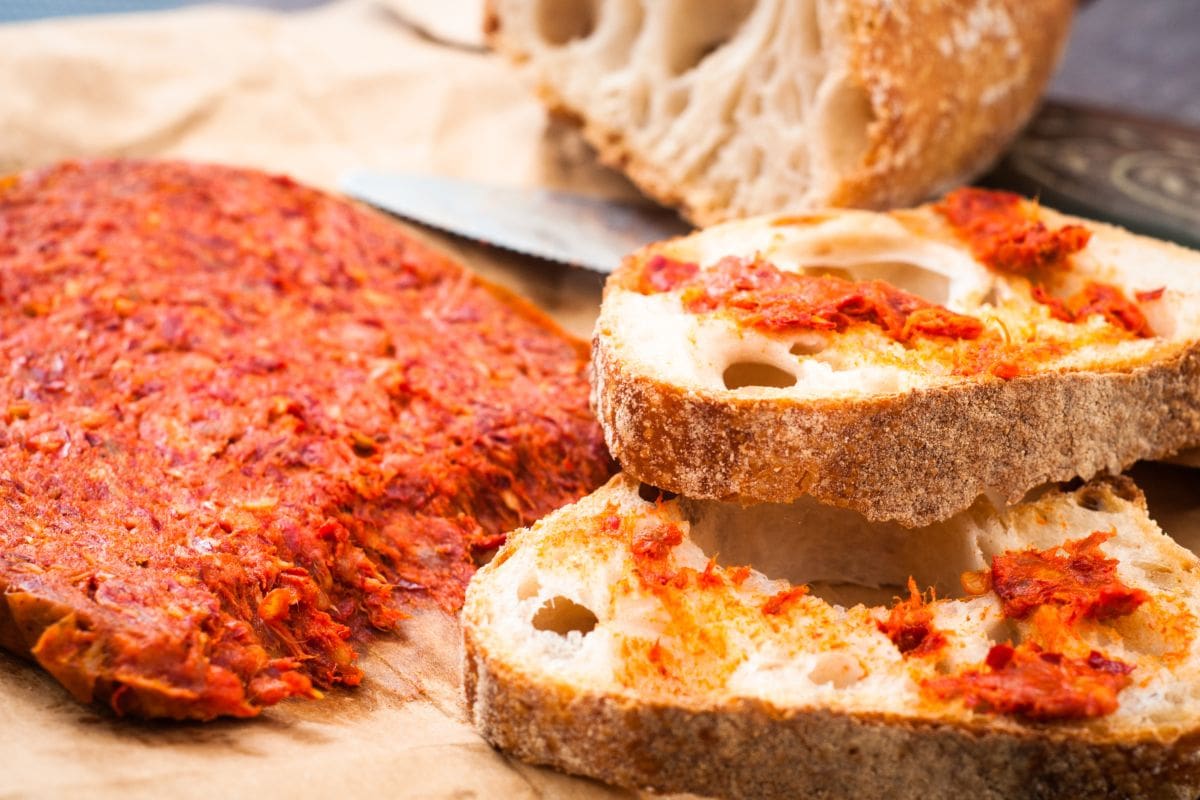 ‘Nduja is very versatile and can be consumed in various ways. You can enjoy it plain; spread on slices of toasted bread, croutons, pizza, or focaccia; or fried in a pan. It can also be used for simple or elaborate sauces.

It is excellent paired with mozzarella or the typical Calabrian homemade pasta shape la fileja. You can add it to an omelette or try it with mature and semi-mature cheeses, such as Pecorino del Poro. On August 8 of each year in Spilinga, there is the ‘Nduja Festival, during which you can try the product in many variations.

‘Nduja can also be found in a jar, with an even softer consistency than the fresh sausage. Regardless of how you choose to enjoy it, if you are not used to spicy flavors, we recommend you try adding ‘nduja a little at a time to your recipes.