Quick Navigation show
1 What are canederli?
2 What do you need to make canederli in broth?
3 What kind of broth is best with knodel?
4 What type of bread should be used for canederli dumplings?
5 Why use stale day-old bread?
6 Tyrolean canederli in beef broth
6.1 Ingredients
6.1.1 Ingredients for broth:
6.1.2 Ingredients for canederli:
6.2 Instructions
6.2.1 Instructions for making broth:
6.2.2 Instructions for making canederli:
7 FAQs
7.1 Can I substitute speck with something else?
7.2 Can canederli be kept in the fridge or frozen?
7.3 What’s the difference between dumplings and gnocchi?
7.4 What are canederli di magro?
2 shares
Recipe Print

Canederli are northern Italian dumplings made from stale bread, eggs and milk and a few other ingredients. These delicious bread dumplings are often cooked and served directly in broth or sometimes served “dry” after cooking.

The dish, canederli in broth, is from the Italian region of Trentino-Alto Adige, but similar bread dumplings are made in other nearby countries like Germany and Austria as well and go by other names including knodel, semmelknödel and mariconda.

What do you need to make canederli in broth?

If you have one or two day-old white bread don’t throw it away! You can use it to make these delicious dumplings. Just a few other ingredients are required, most of which you probably already have in your refrigerator and pantry.

Besides bread, you will need a white onion, eggs, milk, butter, pepper, parsley, chives and speck. The broth can be a simple beef broth from the store or one you make from scratch with a few choice ingredients like beef, carrot, celery, onion, salt and pepper. The combination is a true comfort food that is sure to delight you and your family on a chilly winter evening.

What kind of broth is best with knodel?

The authentic Tyrolean recipe calls for homemade beef broth. This region is known for its beef, and a traditional beef broth recipe is the perfect combination. However, these delicious canederli dumplings will also taste great in a vegetarian or chicken broth if that is what you prefer. If you are vegetarian, you can also easily make canederli in magro, the vegetarian version of these dumplings.

Types of broth you can use with canederli:

What type of bread should be used for canederli dumplings?

The bread typically used to make canederli dumplings is crusty white bread that is stale, usually one or even several days old. We do not recommend using sandwich bread, but whole wheat crusty bread will work fine.

Why use stale day-old bread?

In Italy, bread is sacred. In the peasant farming tradition, throwing away bread was unheard of, because it was a staple in the diet and grain was very hard to come by. This is why every single region of Italy has recipes that call for stale or day-old bread to ensure nothing goes to waste, two great examples of this are panzanella bread salad in Tuscany and torta paesana in Lombardy. 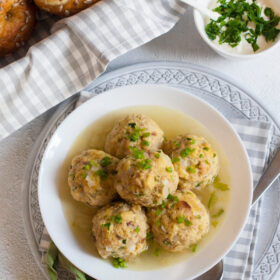 Can I substitute speck with something else?

Yes, you can certainly substitute the speck with another meat like pancetta (Italian bacon) or sausage. Practically every family in this region has their own recipe and own special way of making canederli, so feel free to experiment and add your family’s favorite ingredients!

Can canederli be kept in the fridge or frozen?

Yes, it is possible to keep canederli (either cooked or uncooked) in the fridge for up to 2 days. Do not store them in broth or water. The dry canederli should be placed in an airtight container making sure to keep them separate from each other. They can also be frozen the same way. Do not defrost them, simply immerse them in boiling water or broth straight from the freezer.

What’s the difference between dumplings and gnocchi?

Canederli or knodels are large dumplings or balls made from stale bread and a few other ingredients and then cooked in boiling broth. They are not very similar to gnocchi, which are made from potatoes and much smaller and usually not round.

What are canederli di magro?

Canderli di magro is the vegetarian version of the classic knodel recipe. They do not include meat, which is why they are called “magro” which means lean or thin. They can be made following the exact same recipe, but just leaving out the speck. However, if you want to make them more flavorful you can substitute the speck with leeks or beets.