What comes to mind when you think of Italian food?  If you are like most people, you immediately picture spaghetti, pizza, lasagna…lots of savory sauces, melty cheese, thin, crisp crusts, pasta, and many different spices.  Italian cuisine is some of the most popular in the world, with everything from large chain restaurants to tiny little mama-and-papa bistros drawing us in with their enticing smells and the promise of comfort food at its finest.

There is another side to Italian cuisine that is perhaps not quite so widely known, yet is equally as delicious as the pasta and pizzas that we all savor.  One of these dishes is Veal Milanese.  “Milanese” literally means “from Milan.”

What is a veal, really?

Veal is the meat of young calves, anywhere from one month to about nine months of age.  It can be milk-fed, grain-fed, pasture raised or fed a “special diet” composed of more than 40 vitamins, minerals and amino acids.

They type of feed and the age of the calf determine the flavor of the meat, but in general the meat is more tender and more flavorful than that of older cattle, and for this reason tends to be more expensive than regular beef.  It is used in dishes from many different countries, including France, Italy and the United States.

When was veal first introduced?

Veal has been prized as a delicacy for thousands of years, with its earliest recorded use dating back to about 2500 BC, to the ancient Sumerians. Mosaics and sculptures depict wealthy nobles and priests feasting on veal and wine at lavish banquets.

As most animals were needed for food production, veal was generally only enjoyed by those who could afford to lose a young cow that would otherwise give milk or help in the fields.

Veal is mentioned all throughout the Bible, with many references to slaughtering a young cow either for feasting or sacrifice (or both).

Two notable mentions were the return of the Prodigal Son, in which a father slaughtered his best young calf when his long-lost son returned home, and the wedding feast in Cana, where Jesus turned water into wine. The Romans loved veal so much that the Emperor Alexander Severus had to forbid the people to eat it, as the cattle stock was being depleted.

Veal Milanese recipe from the restaurant

There have been heated debates down through the years as to which one actually came first, including a royal ruckus between two branches of the Hapsburg dynasty (the Austrian and Italian), with each claiming that they invented the dish.

During the Renaissance, veal was considered such a luxury in Florence that if it was on the menu, the law decreed that no other meat could be served alongside it. Catherine de’ Medici, Queen of France from 1533 to 1589, was often credited with introducing veal to the country, however most historians agree that veal was being served at least a century before her reign.

In the 19th century, a Milanese cook went to Vienna and reportedly introduced veal to the country of Austria.  Maybe this solves our little mystery of which came first—the chicken or the egg?

But let’s dive in the real recipe! 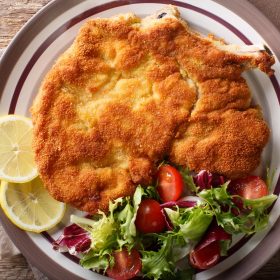 Although traditional Milanese is served with a salad and a cherry tomato side, chefs through the ages have added their own special touches to their dishes.  Some of the most popular variations include:

Veal Milanese sounds fancy, doesn’t it?  Now that you know how easy it is to make, you and your family can enjoy this delightful dish anytime you want to at home!  And here’s a little secret, just between us…you can also use this recipe with chicken!  Just make sure to adjust your cooking times so that you don’t overcook/undercook the meat.

As they say in Italy…”Cento di questi giorni!”