Everything You Wanted to Know About All The Types Of Peaches 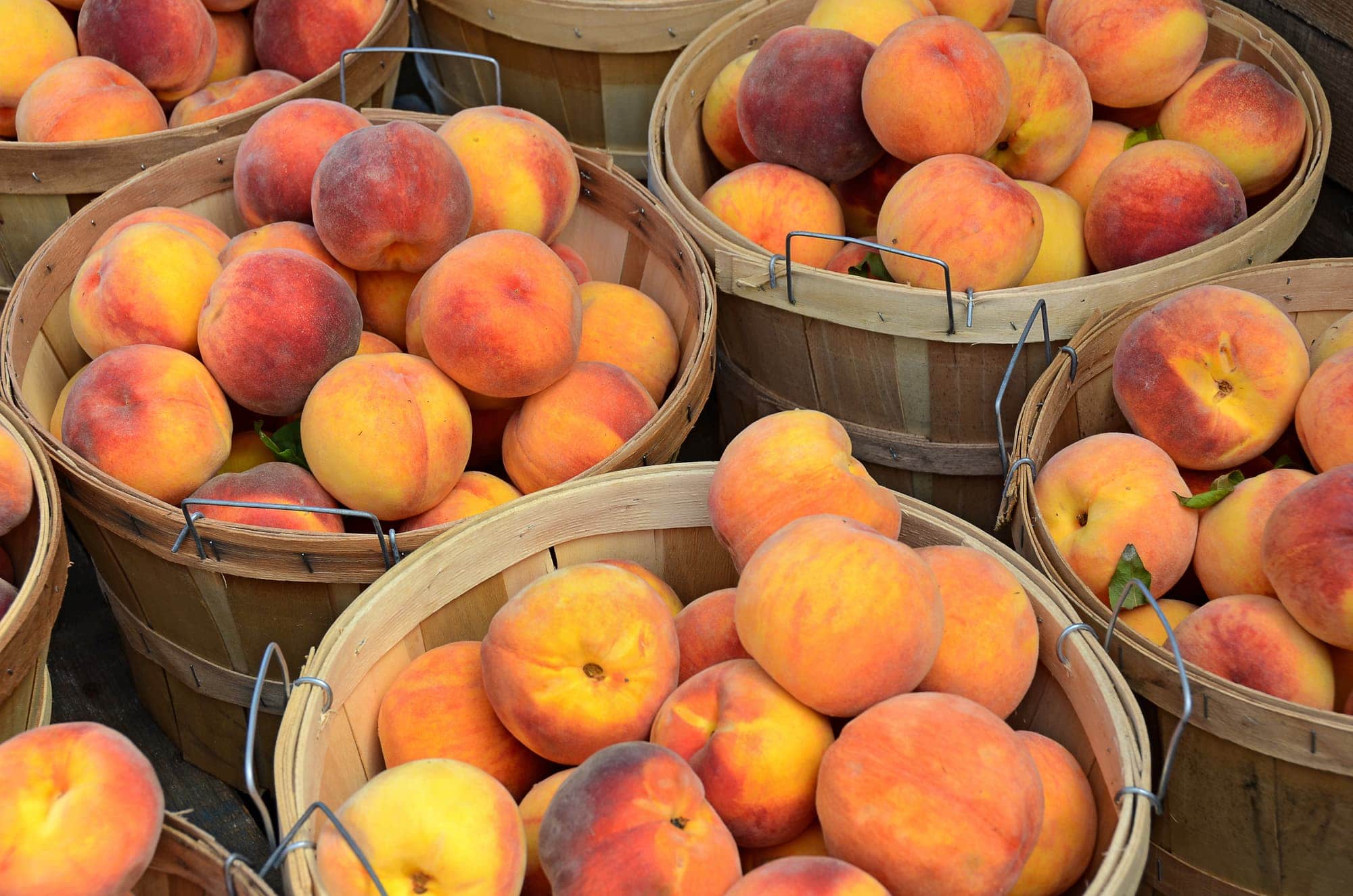 Peaches would definitely appear somewhere near the top of our list of the sexiest fruit on earth if we ever got around to drawing up and publishing one – which, with a little help from our readers is something we’ll be getting around to. Some time.

They’ve always been associated with fine dining and good health but it was probably a combination of the article in the New York Times today as well as the fact that it’s almost the season for them, that inspired us to look at the fruit a little more closely.

Peaches  (prunus persica) belong to the rose family as do almonds, for that matter. The fruit originated in the north of China and not Persia* as the name suggests,  have been cultivated in China since the 10th century BC (or maybe even earlier)  from whence they traveled along the Silk Road to Persia and then on to Europe via the trade routes.

They arrived in the Americas with the Spanish explorers and the rest, as they say, is history.

In China, peaches were reproduced in porcelain and sung about in verse;  dumplings shaped like peaches were specially made for birthdays and even the wood of the peach tree was carved into amulets.

The Romans, later, believed that peaches originated in Persia as Pliny said: “as touching peaches in general, the very name in Latine whereby they are called Persica, doth evidently show that they were brought out of Persia first.” Clearly he was very much mistaken and even more so when he insisted that the Egyptians introduced these peaches to the Persians.

Be that as it may, even then, there were several varieties of the fruit in Rome where they were known as “Persian Apples.”  The French accepted peaches into their gardens with enthusiasm and gave the fruit feminine names – probably inspired by the beauty of the fruit. Amongst the varieties were Belle de Vitry, Belle de Chevreuse and Téton de Vénus (Venus’s nipples).

Although the Chinese had pioneered growing espaliered peaches,  the French discovered this method independently, and the growers in Montreuil (a Parisian suburb), believe it was their invention and their recipe for the production of the best peaches. Louis XIV loved peaches so much that he gave a a life long pension to the man who provided him with peaches from Montreuil.

THE LARGEST PEACH PRODUCERS IN THE WORLD 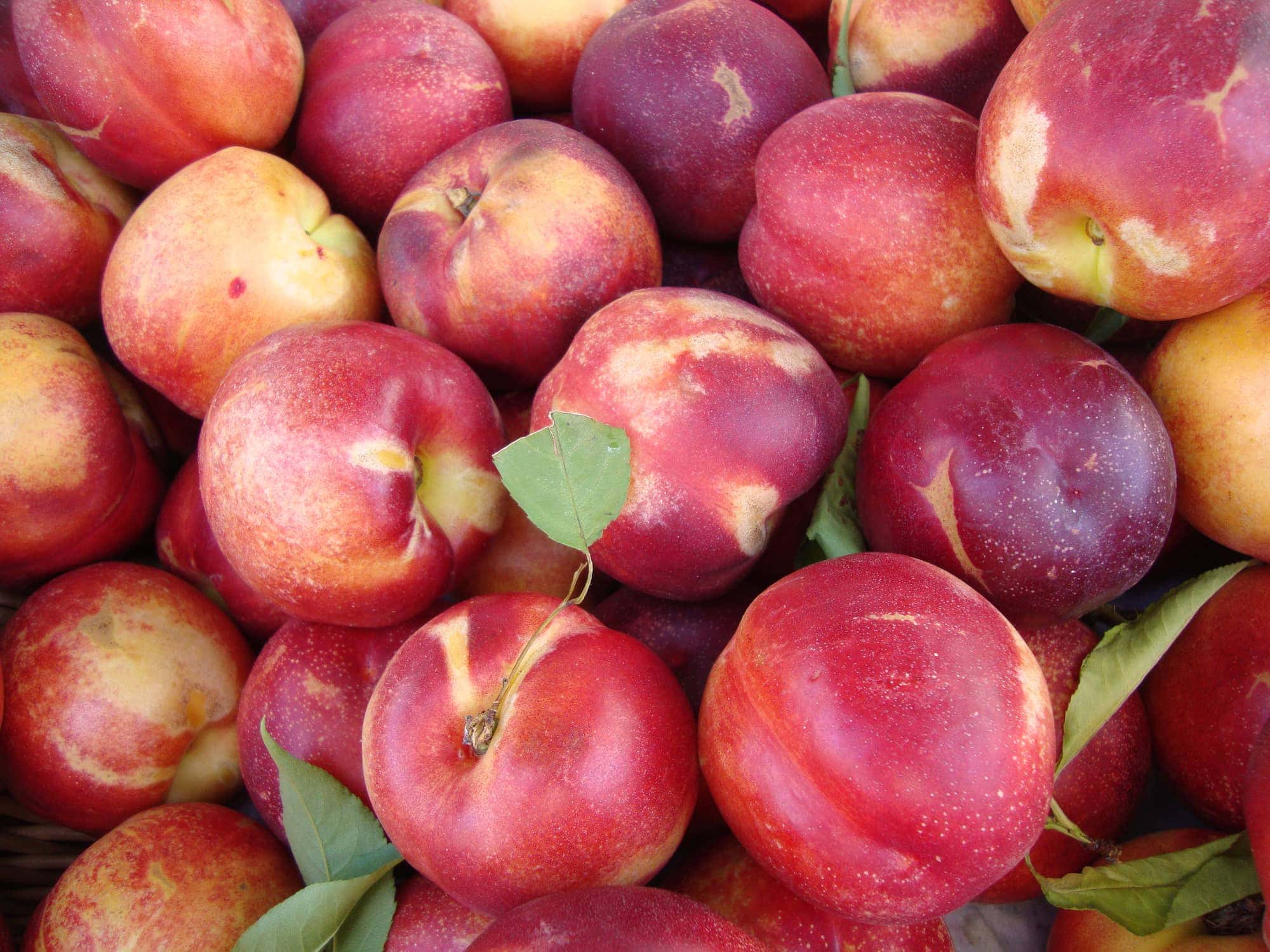 Nectarines are cultivar groups of peaches that have smooth skins – even though “fuzzy peaches and nectarines are regarded commercially as different fruits (with nectarines often erroneously believed to be a crossbreed between peaches and plums, or a “peach with a plum skin”, they belong to the same species as peaches. Several genetic studies have concluded in fact that nectarines are created due to a recessive gene, whereas a fuzzy peach skin is dominant. Nectarines have arisen many times from peach trees, often as bud sports”. As with peaches, nectarines can be white or yellow, and clingstone or freestone.

On average, nectarines are slightly smaller and sweeter than peaches and because they don’t have much fuzz, it may seem that the skins of the nectarines are a little more red than peaches – it stands to reason that the nectarine skin will bruise more easily than the skin of a peach. Nectarines are first mentioned in England in 1616 but they were, in all probability, first grown in central and eastern Asia. They were brought to the USA by David Fairchild of the Department of Agriculture in 1906. 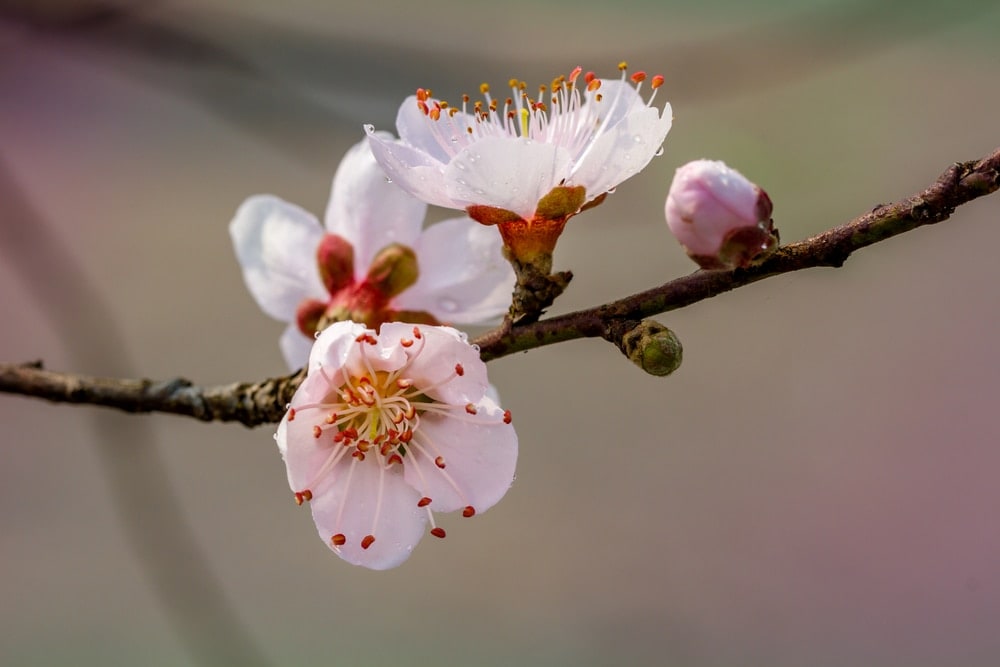 Peaches are important in Asia and are grown in China, Japan, Korea, Laos and Vietnam where they’re a favourite to eat and, because of the many legends and traditions surrounding them, very well known. Chinese legend has that peaches were once eaten by the immortals because it held the power to confer longevity on everyone that ate them. Yu Huang (the Jade Emperor) and his mother, the Queen Mother of the West (Xi Wangmu) made sure these gods would always be immortal by feeding them the special peaches of immortality constantly. The immortals lived in the mother’s palace where they waited for these special peaches to ripen so that the Feast of Peaches banquet could be held. Since this particular tree only blossomed every thousand years and the fruit took another 3,000 to ripen they had a pretty long wait.

MYTHS AND LEGENDS ABOUT PEACHES 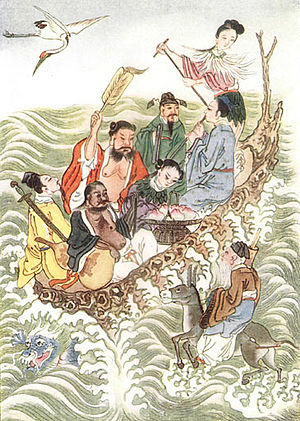 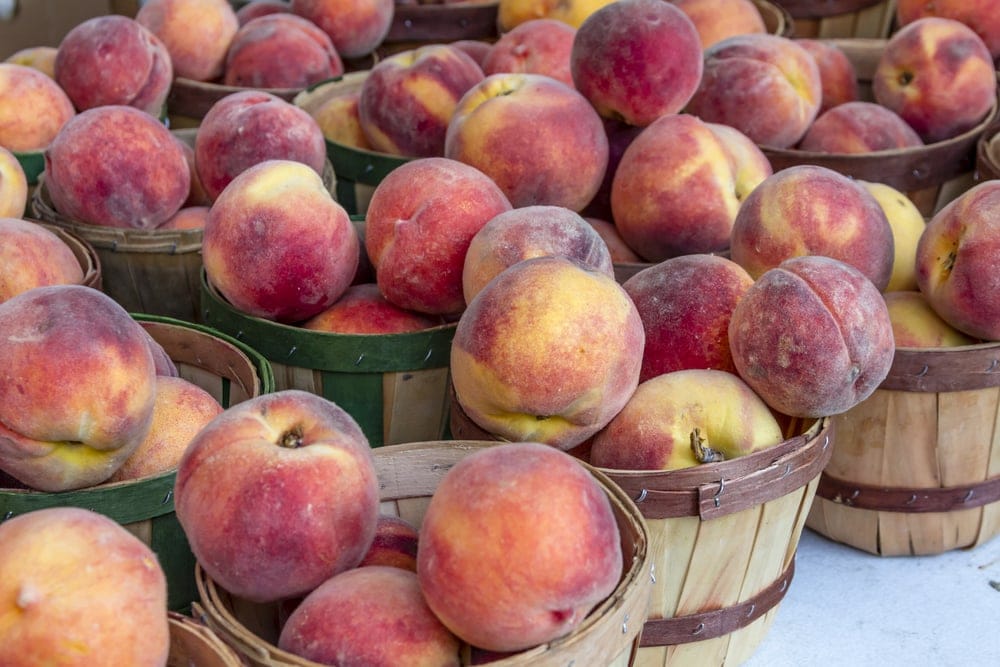 The Spanish explorers brought peaches to the Americas on board their ships where the Indians, in particular, cultivated them with gusto – according to William Penn, there was “not an Indian plantation without them.”  It’s probably thanks to the Indians that peaches spread through the country to the extent they did – the first peaches were grown in the southern states because the weather was perfect for peach cultivation. Today California is the major producer of peaches in the USA, followed by South Carolina and then Georgia.

THE LARGEST ORCHARD IN THE WORLD

The largest peach orchard in the world can be found in the far east of Beijing in Pinggu – here  around 6,000 hectares with an annual output of 270 million kg in 2009 produces more than 200 different varieties of peaches in four major categories. The lay of the surrounding hills, low pollution, sandy soil, a plentiful water supply and the marked difference between day and night air temperatures, make for ideal peach-growing conditions. These peaches are shipped to 25 European countries and the fact that the Pinggu peach has now been GI** registered, makes the fruit infinitely more desirable.   The peaches are huge and have a high sugar content and unique delicious taste and the fact that you will pay a little more for each fruit, well worth while.

Like many other plants in the rose family, peach seeds are a tad poisonous (they contain cyanogenetic glycosides) that can decompose  into a sugar molecule and hydrogen cyanide gas. Before you go running to the fridge to dump your peaches – take note that we are talking about the seeds here and that they’re not, by far, the most toxic of the plants within the rose family. The bitter almond has the ‘honor’ so it’s probably a good idea to skip eating the seeds of any plant belonging to the rose family. 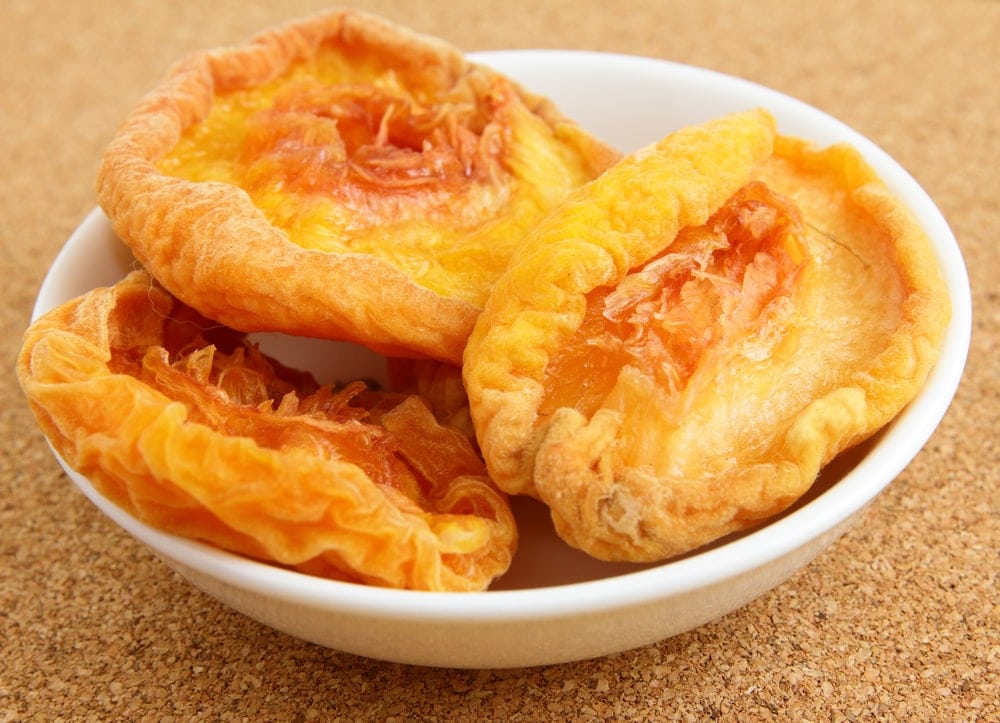 Peaches contain a goodly amount of potassium as well as vitamins C and A – they have diuretic and laxative properties and help to stimulation our digestive juices. Peach leaf tea destroys worms – which is surely loads better than buying tablets. As with most foods, prolonged cooking will destroy important nutrients from peaches. Dried peaches are more nutritious than than fresh peaches and are great to keep handy for those times of the day when you’re absolutely starving and dinner’s a long way off.  Always keep in mind that most commercially-dried peaches are treated with sulfur dioxide to improve color and extend storage life. Be sure to read the label if you are allergic to sulfur.

It may be a good idea to have a chat with your doctor if you are concerned that you or someone in your family may have an allergy to almonds or peaches.

* The Persians brought the peach from China before Christianity  and introduced it on to the Romans.

** The term GI has been defined as “Geographical Indications”, in relation to goods, means an indication which identifies such goods as agricultural goods, natural goods or manufactured goods as originating, or manufactured in the territory of a country, or a region or locality in that territory, where a given quality, reputation or other characteristics of such goods is essentially attributable to its geographical origin and in case where such goods are manufactured goods one of the activities of either the production or of processing or preparation of the goods concerned takes place in such territory, region or locality, as the case may be.