All the Different Types of Coffee Made in The World 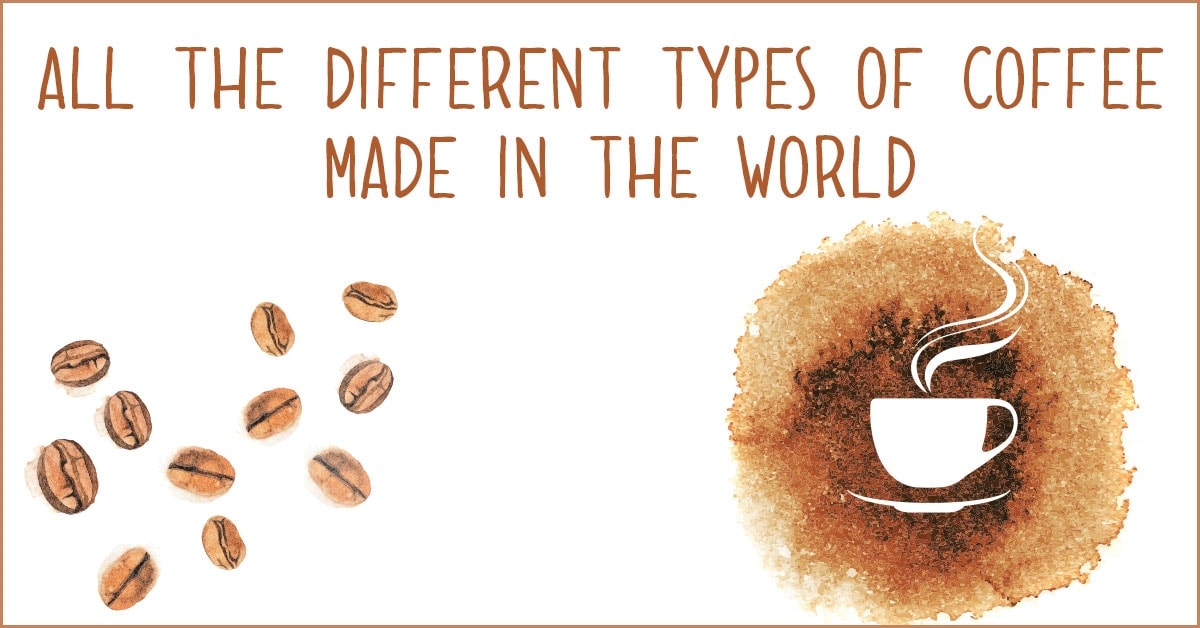 It’s one of the most addictive and popular beverages in the world. It suppresses the parts of your mind that aren’t quite alert. But coffee does more than just make our work mornings—and nights—liveable. Coffee has played a huge role in world history, going back to colonial times. As is the case with many beverages, coffee comes from a plant, and there are at least 100 types of coffee beans. These species have been selectively bred and refined for hundreds of years. It’s a huge source of income for developing economies like Vietnam and Brazil. Wherever you go, this ubiquitous drink has unique, yet similar, methods of consumption.

Coffee beans, which are technically seeds, come from Ethiopia, centuries before the modern nation was even a gleam in its mother’s eye. There aren’t written records of people drinking coffee so long ago. What we do know is that at some point in prehistory—that is, before the invention of writing—Ethiopian locals replanted coffee beans that grew naturally in the mountains, choosing to grow them in the valleys where they lived.

Like yellow corn, giant seedless watermelon, plump strawberries, and so many modern fruits and vegetables, farmers replanted and grew the coffee beans they liked best. Slowly, over time, favorable varieties emerged. Today, a huge range of rare coffee beans grows in Ethiopia, with some of the oldest types of coffee that exist on the planet.

More on the types of coffee beans below.

A Brief History of Coffee: Europe and Beyond

When the Dutch “discovered” Ethiopian coffee, they fell in love with it. They sent the plant to a colony in Java, in Indonesia. From there, coffee went to France and Europe, the Caribbean and Latin America, and to the rest of the world.

Italy has been drinking coffee since at least the 1600s. But it wasn’t until Luigi Bezzera came up with the espresso machine in 1901 that Italy distinguished itself from the rest of the world with its own unique brand of coffee preparation. To this day, Italians are known to scoff at their American counterparts for never being able to do it just right.

For America’s part, we consume 400 million cups of coffee every day. However, the coffee bean is only grown in two states: Hawaii and California. The rest, which amounts to $4 billion worth of coffee per year, is imported from Colombia, Kenya, Indonesia, and all over the world.

Coffee thrives in subtropical regions, especially in high altitudes. This is why growth in the US is so limited, and why countries like Vietnam grow their plants in mountainous, rural regions, such as the gorgeous Đà Lạt and Bảo Lộc areas.

Types of Coffee—How Coffee is Made

Here is your all-purpose coffee list: how the coffee is made, how it is served, types of roasts, types of coffee flavors, and some fun facts. Let’s get into the nitty gritty. In alphabetical order:

Most of the coffee you’ll find today is of the species, Arabica. The varieties that are outlined below are of that species.

As the indigenous, genetic homeland of coffee, Ethiopia contains many different types of coffee beans. Famous among these are Harar and Sidamo, the former of which is known for a fruity flavor. These two names are owned and trademarked by the Federal Democratic Republic of Ethiopia.

Blue Mountain Coffee is grown in Jamaica. It is an excellent crop as it is naturally resistant to common plant diseases.

Geisha, originally from Ethiopia, is grown in Panama today. It owns the title of the most expensive coffee in the world.

If the name Typica reads like something that happens every day, you’re being an etymologist! The Typica variety, originally from Yemen, is a common plant. The plot is thicket than that, however. Replanted by Europeans from Yemen to India, and subsequently all over the world, Typica is the grand-daddy of a horde of genetic varieties today, each with their own unique characteristics.

In 1931, Scott Laboratories, an American beverage company, selected a variety of coffee, dubbed SL28. SL28 has a unique profile that is reminiscent of blackcurrant. Notably, this crop is resistant to droughts.

Sumatra coffee, as you might imagine, is grown in Sumatra, which is on the Indonesian archipelago, near Java. Sumatran coffee is known for its citrus-like profile that is reminiscent of lime, or some say even grapefruit.

Although there are many different types of coffee, there are only four basic roast categories, and they are relatively straightforward.

You may be surprised to learn that dark roast coffee does not have the highest caffeine content. In fact, dark roast coffee contains the least amount of caffeine. This is because its chemistry changes so much during the roasting process that it actually loses some of its innate nutrition.

Here are the four categories:

And the Strongest Coffee in the World is…

In 2017, several news outlets started going a bit stir-crazy over a brand of coffee called Black Insomnia. That name is totally metal, and it appears to live up to the hype. Wanting to be my own witness, I tried to place an order, but they were all sold out as of this writing.

According to Today, Black Insomnia (17.5 grams caffeine/kg) beats out its competitor, Death Wish Coffee (13.8 grams). For reference, that’s about three times the amount of a cup of Starbucks dark roast.

Thank you for joining us on this journey of coffee education. After coming through on the other side, we can safely say that there is a lot to this famous beverage. A lot of history, nearly endless amounts of brewing methods and cultural spins, and enough facts to make your head spin. And the truth is, we’ve barely scratched the surface of this iceberg.

Did we miss anything? Let us know in the comments below!