Trippa or tripe is obtained from the three cavities between the esophagus and the stomach. The prestòmaci is the rumen (the largest sac-shaped part, also called tripe, cross, cross, belly, smooth tripe or busecca), the reticulum (or cap, a small sac with a globular appearance, also called cap, nest of ‘ape, bonetto or beretta) and the omasum (ovoid-shaped covered internally by a mucous membrane composed of lamellae, from which the different names derive: millefogli, libro, centopelli or foiolo).

In some regions of Italy, however, such as in Lombardy, the first part of the small intestine of the calf and ox is also considered tripe. It is called riccia (curly or French tripe), and it is particularly rich. In Lazio is known as Paiata. Also in Lombardy, in addition to ruminant tripe, tripe, i.e. the pig’s stomach, is also used. Lamb tripe is rarely used in Italy except for in some traditional Abruzzo dishes.

In any case, different types of tripe that we find on the market today are already cleaned and partially pre-boiled. The washing and bleaching methods used for this operation considerably affect its gastronomic quality (aggressive detergents, or excessively long cooking damage the tripe). For this reason, if you want to prepare an excellent tripe, it is best to contact a trusted butcher, expert in the treatment of this delicate meat.

Tripe is a rather rich food, with a high protein content (16/18%, similar to that of veal). Its presumed poor digestibility however, is not so much due to the fat content (4%), as to the abundance of seasonings and flavorings used for its preparation. The same can be said for the calories of tripe -100 g of tripe develop 106 kcal – a value that usually increases dramatically when the recipe is completed. The sore point of tripe is represented by the abundant quantity of cholesterol, but considering that you don’t eat tripe every day you shouldn’t be alarmed.

Tripe is part of the Italian culinary culture: each region has its own traditional recipe, and even a different sensitivity and appreciation, due to the varying uses and habits. Tripe is such a consolidated presence on our tables (and on those around the world), that the recipes that see it as the protagonist are really many. Some consider tripe a soup (the Lombard Busecca, the Paduan Sopa de Tripe, or the Neapolitan tripe soup), others a second course (the tripe alla bolognese – with Parmigiano – or that alla Lucchese – with cheese and cinnamon), others still a sandwich filling (the famous Florentine street-food based on Lampredotto or the Calabrian morzello which is enjoyed with the traditional Pitta Calabrese bread), and even canned food! 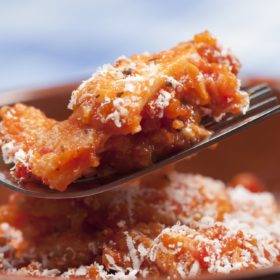 Liked this recipe?Follow us NonnaBox for more!
13 shares