The pasta tradition in Abruzzo

Abruzzo boasts an ancient tradition of pasta, the production of which is of great importance thanks to the sources of pure water from the mountains, the production of selected wheat, the favorable climate for drying, and the absolute mastery handed down from ancient pasta makers.

In fact, several Abruzzo pasta companies have become well-known throughout Italy and abroad. Pasta makers like Masciarelli (founded in 1867), Cocco (1989) and Verrigni (1898) are among the best.

Historically, pasta was made at home almost daily by mixing water, semolina, and eggs. The tricks and skills have been handed down from generation to generation, innovating over time thanks to the use of new machinery and the creation of new specialties.

There are many types of pasta in Abruzzo, but the best-known shape is maccheroncini alla chitarra (also called spaghetti alla chitarra, or tonnarelli). It is made with semolina, eggs, water, and a pinch of salt.

Maccheroncini alla chitarra gets its name from the tool with which it is made: a wooden frame with thin metal wires, on which the sheet of dough is placed and then flattened with a rolling pin, thus obtaining the classic shape of thick spaghetti. The tool, which is called maccharunare, is also called the chitarra (guitar), because it resembles the musical instrument.

Some sources report the 1700s as the decade of invention of the maccharunare, conceived by the maccharonari who took inspiration from the frames with the taut threads that were used for drying pasta.

Over time, this tool spread throughout the region, replacing an older tool called ruzzolo, with which another type of pasta, the maccheroni a lu rentrocele, was prepared: long pasta made by passing the dough through a notched iron rolling pin called a roll.

In Abruzzo, the spaghetti alla chitarra is usually prepared with a meat ragù sauce. In the province of Teramo, a traditional preparation is with sugo di pallottoline, a meat sauce that consists of small meatballs fried and boiled in a tomato sauce.

Other variations can be found in adjacent regions as well. In Molise it is called maccheroni crioli and is squared rather than rounded, and in the Lazio region is called tonnarelli, which is most famously made with cacio e pepe. 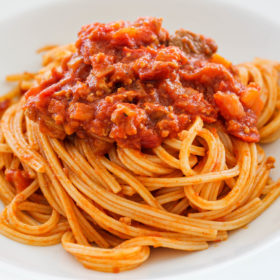 In choosing a wine to pair with pasta, the secret is to always consider the dressing. So when it comes to this rich meat sauce, the perfect marriage would be a rosé that is fresh and structured, and that can balance the thick, meaty flavors. Cerasuolo d’Abruzzo — perhaps vintage — works perfectly, as it’s a bold rosé that is fresh, slightly tannic, and its aroma recalls that of ripe fruit. Looking for an alternative? Try a Nebbiolo from Piemonte.