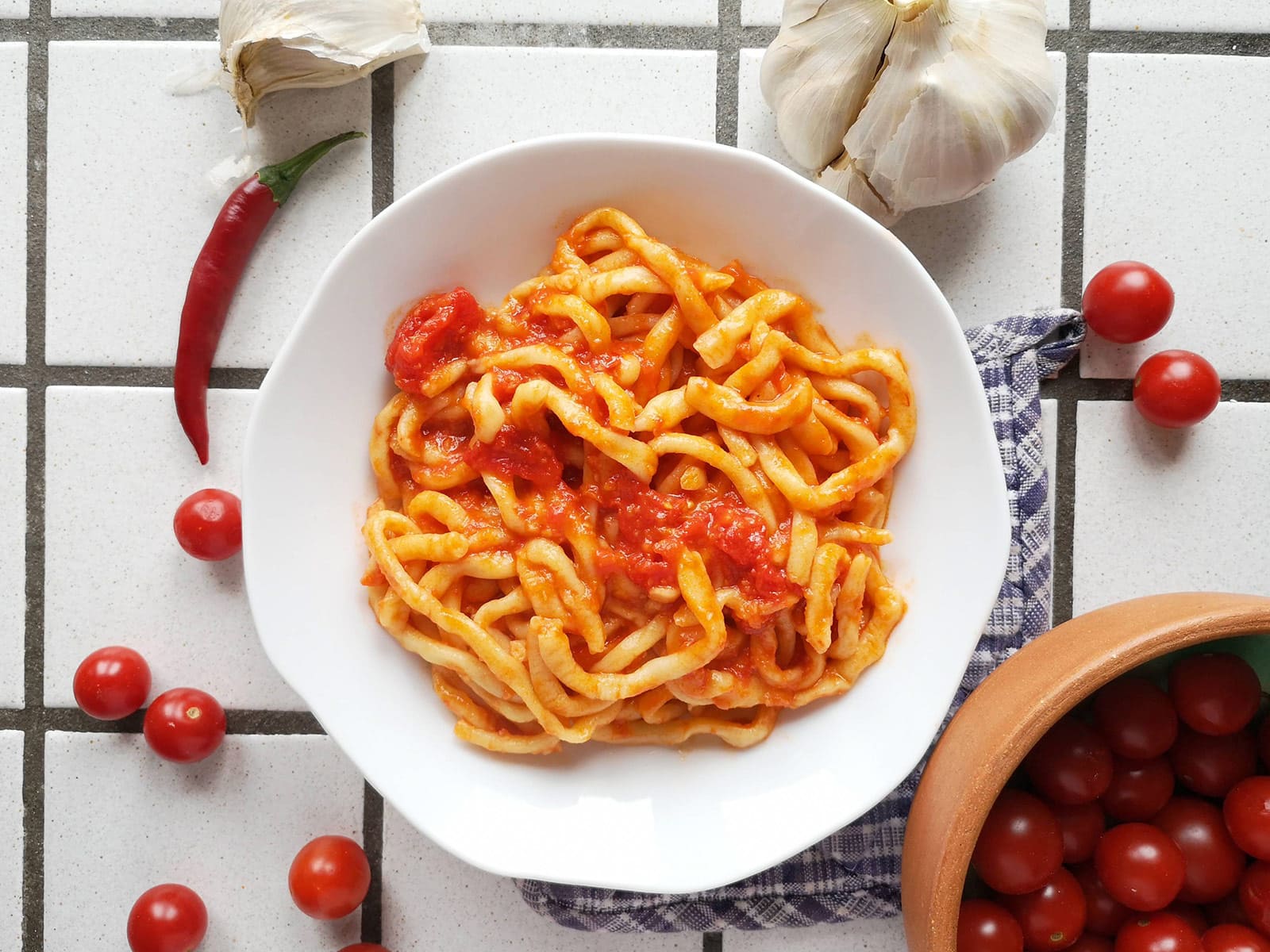 Pici all’aglione is a simple and delicious dish characteristic of Tuscan cuisine. This dish is emblematic of the Tuscan peasant tradition, and it can easily be prepared at home.

What are Pici pasta?

But what is Pici? The pici pasta, also known as Tuscan spaghetti, is a thick and long pasta made of flour and water that makes for a great first if you would like to start making your own pasta.

It is common in southern Tuscany, more specifically in Val d’Orcia, Val di Chiana, Monte Amiata, and the province of Arezzo up to the province of Viterbo, where they are called “umbrichelli”. They are “pinci” in Montalcino, and “picciarelli” in Maremma.

The history of the Pici all’Aglione

Tradition traces the Pici back to the Etruscan era, where we find evidence of Pici in the very famous “Tomb of the leopards” in Tarquinia. It is thought that the name derives from Marco Gavio Apicius, gastronome of the Roman era and author of the culinary compendium “De re coquinaria,” the art of cooking.

The origins of the name probably come from the type of procedure that is carried out by mixing flour and water by hand, sticking them between each other, joining them together and mixing the whole thing together. Once the dough is made, strips are cut, and these are rolled one at a time on the pastry board. The result is a roll of pasta that resembles a coarse spaghetti. 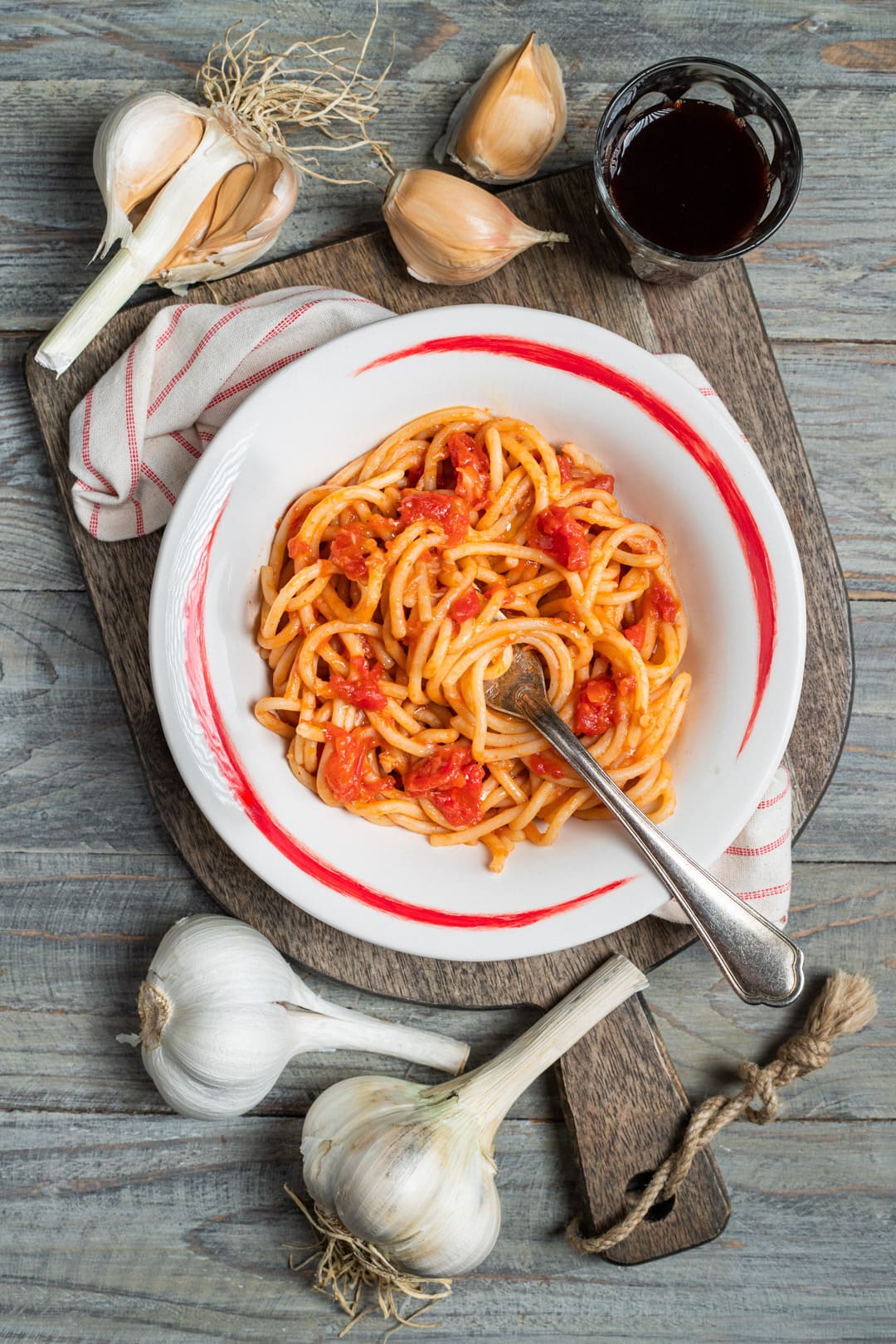 The dough for the pici pasta is very simple and versatile. Thus, this pasta can be seasoned in various ways. For example, when making pici all’aglione, a type of garlic is used that is much larger than the traditional one. A single clove can be equivalent to the whole bulb of the common garlic. It is known by the name of “Aglione della Valdichiana,” and in the nineteenth-century, botanical books referred to this garlic as “serpentine or tambourine” garlic, and described it  as “much thicker and less sharp in flavor.” It has been cultivated and produced in Tuscany for centuries. 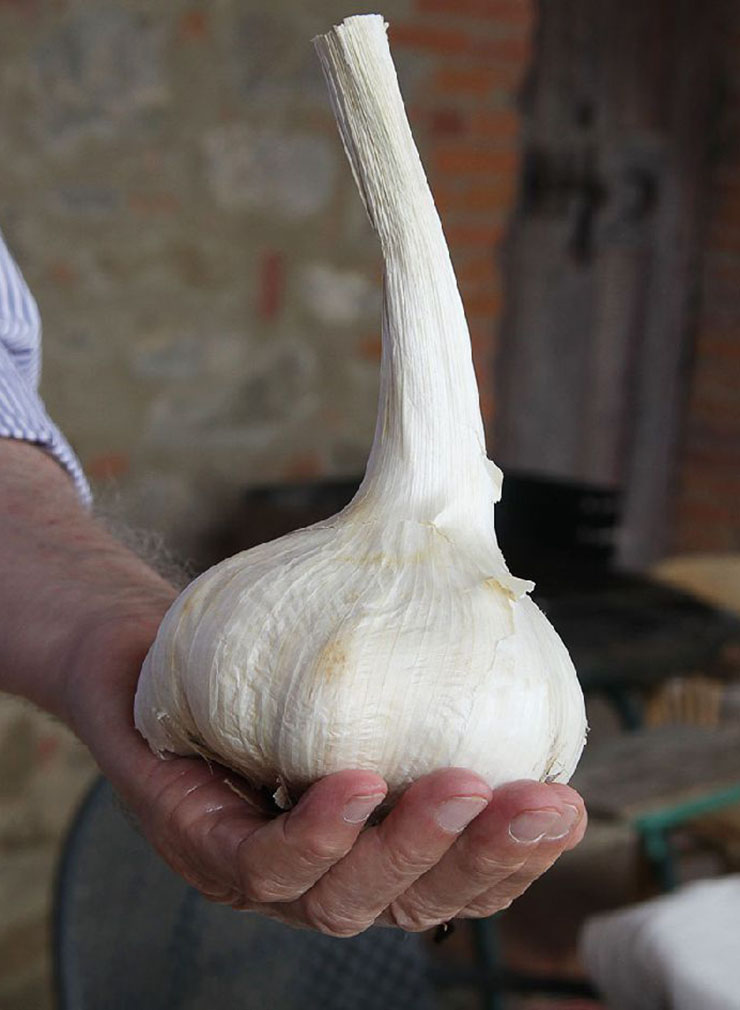 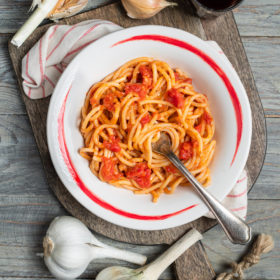 Ingredients for the sauce

To prepare the pici

To prepare the sauce

To cook the pici

Liked this recipe?Follow us NonnaBox for more!
52 shares