What is pasta alla gricia?

Pasta alla gricia is a traditional recipe from Lazio known as the ancestor of amatriciana , which originally lacked tomato, the only ingredient to differ between the two recipes. Both recipe, along with pasta carbonara and cacio e pepe, are between the most famous roman recipes around the world.

The sauce for this roman pasta is made from olive oil, guanciale (pork jowl), black pepper , and plenty of pecorino Romano . You can add onion to these ingredients as well, even if the original recipe does not include it. However, there is no precise rule: just follow your personal taste, because in both cases, the result is very good! The best-known recipe is that of spaghetti alla gricia, although it is possible to use your favorite pasta, even rigatoni .

Pasta alla gricia is considered by many to be the ancestor of pasta all’amatriciana. It has roots in Amatrice, in the province of Rieti, and there are two theories on the etymology of its name. One version sees in the name gricia a reference to the gricio, or the person who dealt with the resale of food, especially bread. This worker, according to tradition, had no time for overly elaborate dishes and mainly ate simple pasta topped with guanciale and pecorino.

Another hypothesis is that the name gricia derives from the town Grisciano, near Amatrice, which therefore would be the true birthplace of this dish. It was only around 1800, however, that tomatoes were added to the recipe ingredients, thus giving rise to pasta all’amatriciana.

We have presented the recipe for pasta alla gricia with onion, which gives it a truly unique and rich flavor. The original recipe, however, does not include onion, and it calls for lard instead of olive oil. There is also a version of pasta alla gricia with pancetta, for those who prefer a less aromatic and even more smoky flavor; just sauté cubes of it instead of the bacon.

To make this dish truly perfect, the choice of wine is essential! We suggest pairing Cesanese del Piglio, a wine produced in the province of Frosinone (in the region of Lazio, from where this recipe also comes). Alternatively, choose a classic full-bodied red such as Sagantino di Montefalco. 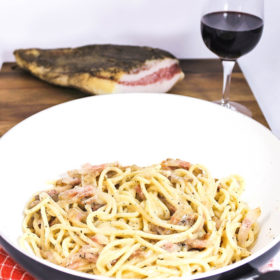 Liked this recipe?Follow us NonnaBox for more!
99 shares