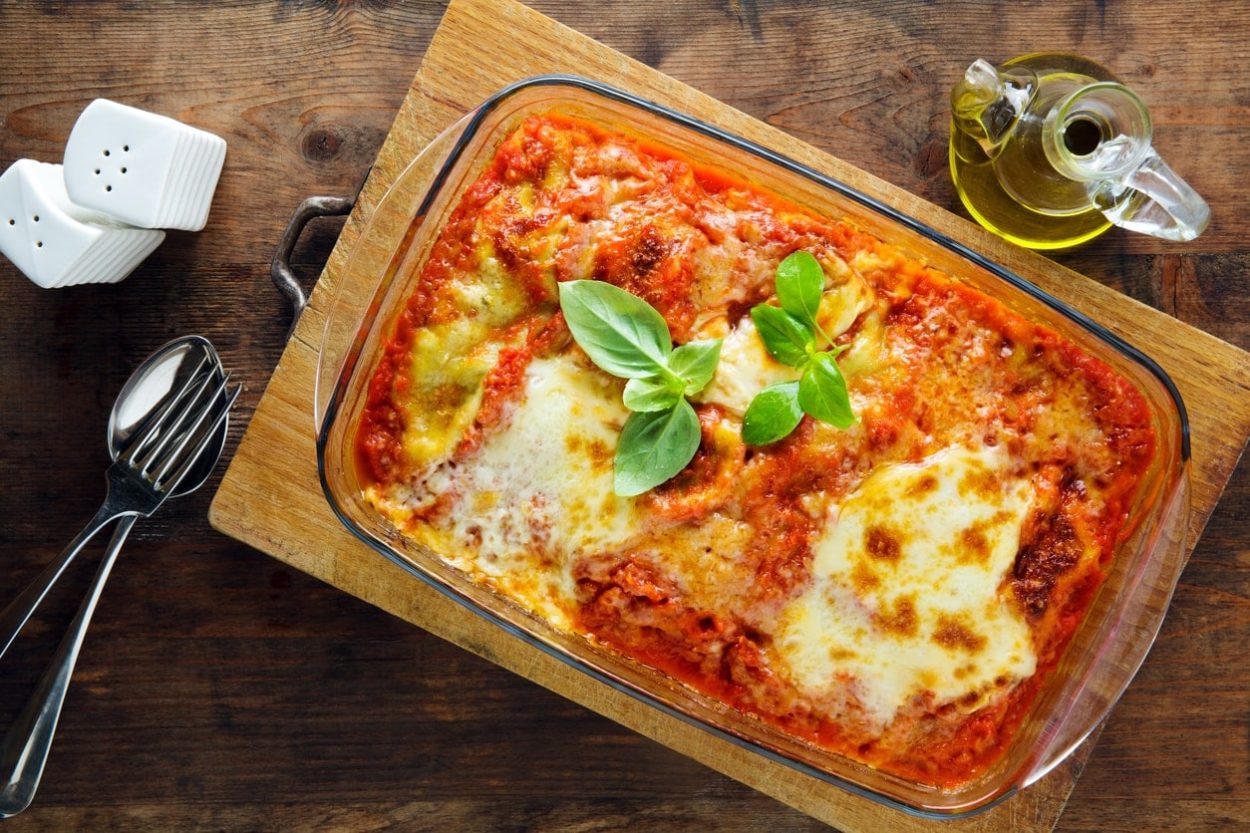 Quick Navigation show
1 How Lasagna Was Born?
2 Regional Variations of Lasagna
3 Do you cook lasagne sheets before layering?
4 How long does it take to make a lasagna from scratch?
5 How long do I leave lasagna in the oven?
6 Can I freeze lasagna?
7 Authentic Lasagna alla Bolognese
7.1 Ingredients
7.2 Instructions
7.2.1 Cooking & Preparation:
7.2.2 The Assembly:
7.2.3 Baking:
7.3 Notes

Lasagna alla bolognese is a traditional dish from the Emilia-Romagna region of Italy, in particular from the city of Bologna.

In Italy, it is usually prepared as a Sunday lunch dish, or as a main course for special occasions such as festivities. The main ingredients of lasagna are pasta sheets, Bolognese sauce, béchamel sauce and lots of grated Parmigiano Reggiano cheese.

You can prepare the lasagna sheets beforehand yourself by following this homemade fresh pasta recipe, or by purchasing premade pasta sheets at the store.

How Lasagna Was Born?

Lasagna is considered to be one of the oldest types of pasta in the world. How do we know this? Well, let’s trace the origins of this unique pasta and the dish of the same name, back to their roots, shall we?

Attributed to have come from the province of Naples in the Campania region, historians are not 100% certain when the lasagna was first created. During the Middle Ages, however, a cookbook called Liber de Coquina contained a recipe that resembled the lasagna of today.

Liber de Coquina is one of the oldest cookbooks from the medieval period and it was published around the 13th to 14th century.

Historians believe it was written by an Italian from Naples, hence the conclusion of where the recipe originated.

There’s also another story that researchers have found a British cookbook, which was discovered earlier than the Liber de Coquina.

They say it contained something that also resembles a lasagna recipe. But whichever of the stories may be the pasta’s true origin, most historians agree that lasagna had become one of Italy’s traditional dishes by the late 1300s.

Historians theorize though, that the original lasagna recipe didn’t have tomatoes. Why? Well, because tomatoes weren’t cultivated in Europe at that time.

Their research states that tomatoes were first brought to Europe, particularly to Sicily, by Spanish explorers from South America only in the 16th century. But even though the original recipe didn’t have yummy tomatoes, it did contain various kinds of cheese.

In Italy, you can find almost a different type of lasagna for each Italian region: 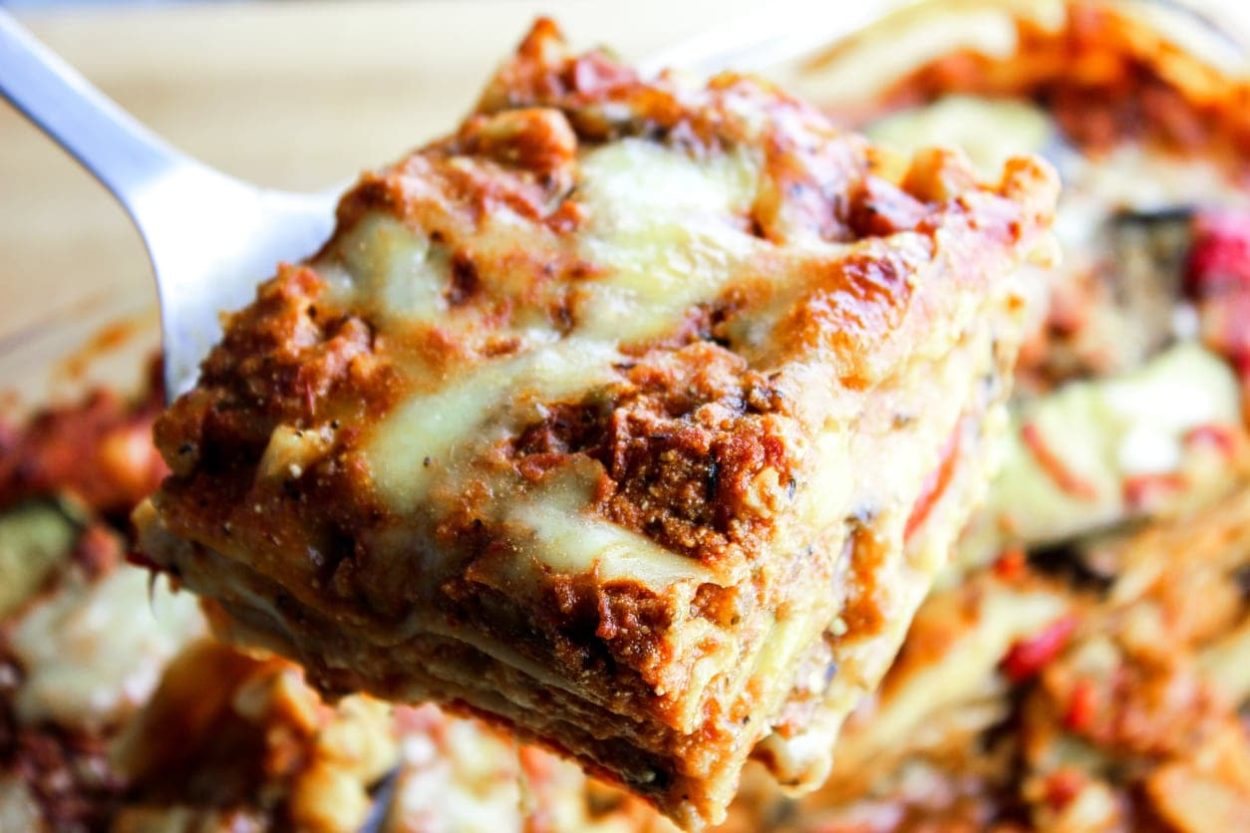 Do you cook lasagne sheets before layering?

You can bake lasagna without pre-cooking the pasta sheets. You just need to make sure there’s enough moisture in the dish when you bake it.

How long does it take to make a lasagna from scratch?

Making a lasagna may take 30 minutes up to 3 hours. This is because of one of its time-consuming ingredient, the ragú meat sauce, that takes up to a minimum of a couple of hours to make.

How long do I leave lasagna in the oven?

It really depends on the number of layers the lasagna has. Typically you can bake the lasagna for 25 to 35 minutes while covered with aluminum foil and another 5 to 10 minutes without it.

Can I freeze lasagna?

Freezing a baked or unbaked lasagna is completely fine. If you have already baked the lasagna, allow it to cool down completely, cover it with aluminum foil and then freeze it in the same baking pan. Alternatively, you can cut it in smaller portions, and then freeze it. You can freeze an uncooked lasagna, make sure that it’s tightly covered with plastic wrap, then aluminum foil. Lasagna can be stored in the freezer for up to 3 months.

Now, after metaphorically munching on all these interesting facts, below is the recipe for authentic lasagna alla bolognese.

For this recipe, you can use dry or homemade lasagna sheets. And if you want to make an especially nutritious and more flavorful version, you can also use lasagne verdi, which also comes from the Emilia-Romagna region.
4.85 from 13 votes
Print Pin Rate Save Recipe Recipe Saved!
Course: Main
Prep Time: 30 minutes
Cook Time: 3 hours 40 minutes
Total Time: 4 hours 10 minutes
Servings: 8 people
Calories: 845kcal
Author: Nonna Box

Let it stand for 10 minutes before you cut and serve. Buon appetito!
Liked this recipe?Follow us NonnaBox for more!
127 shares