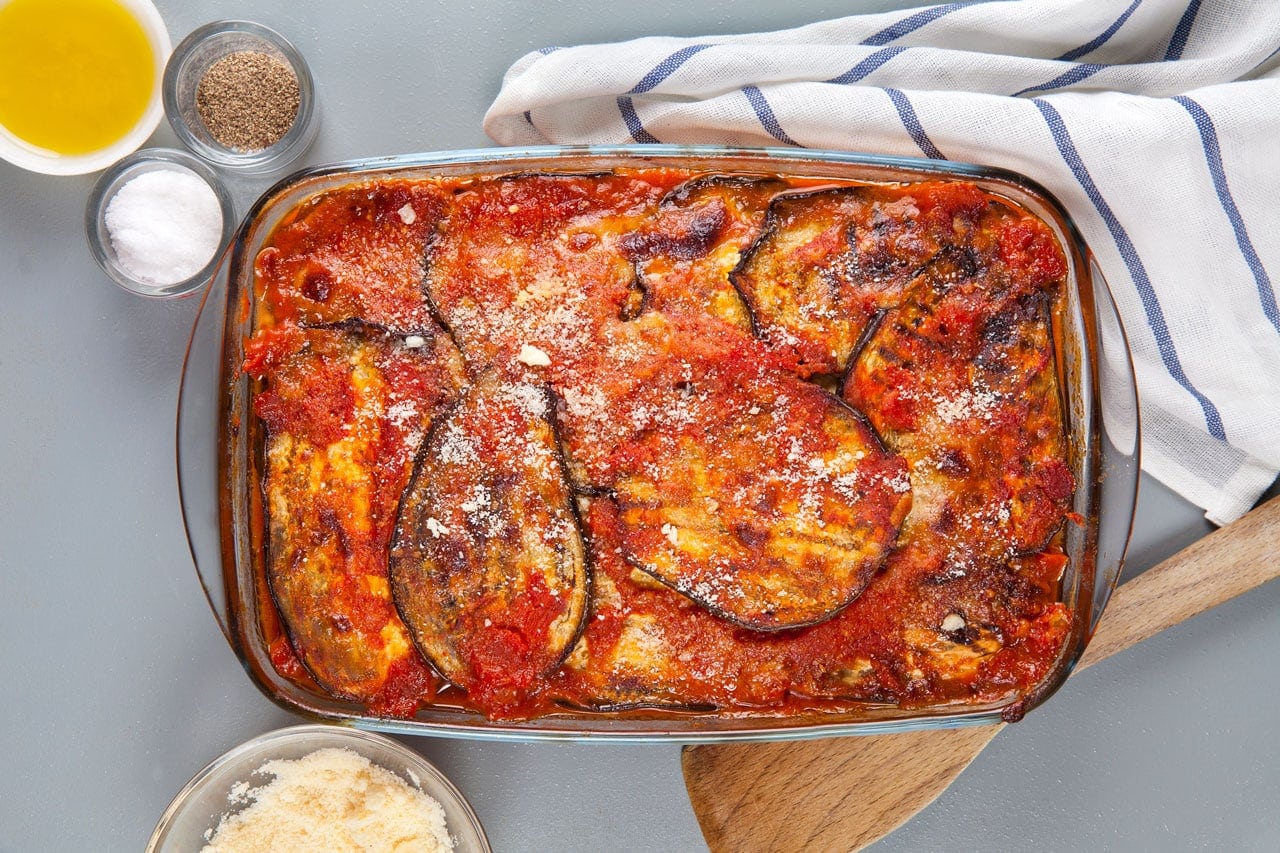 Eggplant parmigiana is a classic dish that almost everyone has tried once or twice. It is a delicious, meat-free dinner option with a long history rooted in Italian culture.

While you may think that eggplant parmigiana seems like a complicated dish, but it is quite simple.

We’ll share with you a beautiful, easy and very tasty eggplant parmigiana recipe that you can make any time right from your own home. It will be like having a piece of Italy baking in your oven!

The origins and history of eggplant parmigiana are quite interesting. In fact, there is a widely known dispute over how the dish even got its name.

Eggplant parmigiana is a classic dish of southern Italy and is mostly associated with the cooking style of Naples.

However, it can easily be found in Calabria and Sicily as well. If you are wondering what eggplant parmigiana is, that may vary region by region.

Essentially, the dish as we know it today is a casserole made with thinly sliced eggplant, which can be battered or plain.

They can be baked or fried and layered with tomato sauce, mozzarella and parmigiano cheese, basil and some even add hardboiled egg slices.

Of course, eggplant parmigiana hasn’t always resembled this and, once again, the name of the dish is still something to be discussed.

The dish goes back to the later 1300’s where it is mentioned in a poem about food called Il Saporetto. This poem refers simply to eggplant with parmigiano cheese.

Which means that it was seasoned with butter, cinnamon and other spiced with grated parmigiano cheese over the top along with a cream sauce.

The dish as we know it today, follows a recipe from 1837 in a cookbook called Cucina Teorico-Pratica, which was widely popular in Naples. This is when a tomato-based sauce makes its appearance, being layered in with the eggplant.

All of these recipes point to “Parmigiana” referring to parmigiano cheese yet many think this is not how the dish got its name, especially since the cheese is not native to Naples, where the dish is said to have originated.

One theory is that the dish is actually from Northern Italy in the city of Parma (where Parmigiano cheese is also from).

Another argument claims that the word parmigiana comes from the word “damigiana” which is a wicker sleeve used to hold a hot casserole.

Yet another idea references the Sicilian word “palmigiana” which means “shutters”, referring to the overlapping panes of shutters that are layered like the eggplant dish.

All of these potential stories about how eggplant parmigiana got its name are speculative and not backed by much evidence.

So, it is pretty safe to say that the dish is named after the famous cheese, especially since it is mentioned so frequently in recipes dating so far back.

No matter how it got its name, it is an authentic Italian dish that deserves its moment in the spotlight! 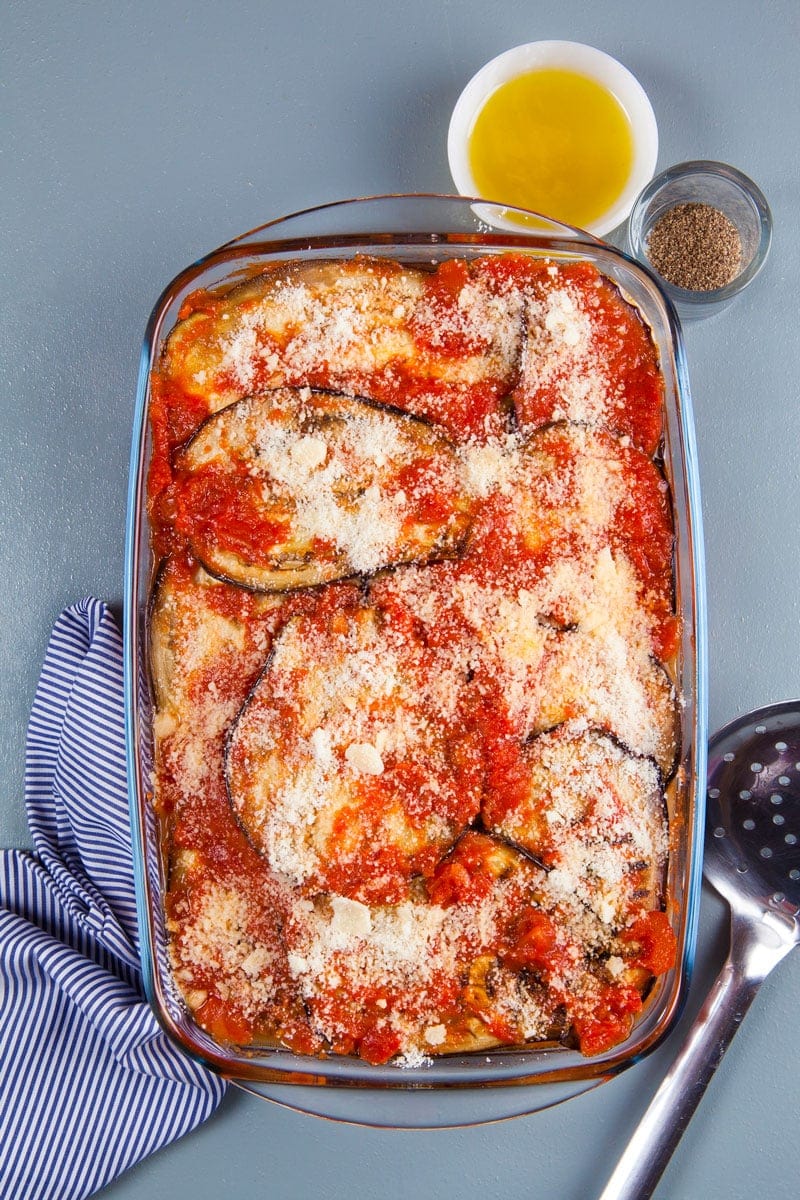 In every eggplant parmigiana recipe, there is always eggplant- of course! This is, after all, the basis of the entire dish! Tomato sauce is another commonality, especially in the recipe as we know it today.

Freshly grated Parmigiano-Reggiano cheese is another necessity. After these three essential ingredients, methods will vary slightly, each making the dish it’s own.

Some recipes will call for breadcrumbs, which are either sprinkled on top of the dish or can be used to coat the eggplant slices before cooking.

Mozzarella cheese is another common ingredient and is often layered in between the eggplant or just on top of the casserole, baking until it is melted and almost golden brown.

These variations are delicious but not necessarily authentic. Feel free to experiment with the sauce as well, using your favorite marinara recipe to pour over the eggplant!

The eggplant can be baked in an oven, grilled or fried. It can be breaded or plain.

The slices may be thick or very, very thin all depending on your recipe! For our version here, we will simply bake the thick-sliced eggplant as that tends to be the easiest (and most delicious) way to prepare the vegetable!

After the sauce is cooked, the layering of the casserole begins. A little sauce in the bottom of a casserole pan is followed by a layer of eggplant, a sprinkling of cheese and then the layering starts again.

Once you are out of these ingredients, either breadcrumbs or mozzarella is added as the final layer and the dish is ready to bake!

Seems pretty easy, right? Give this eggplant parmigiana recipe a try today and see why it is a dish that has withstood the test of time! 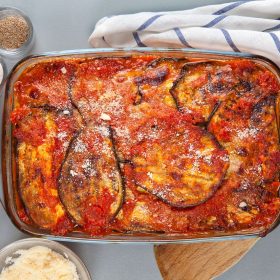