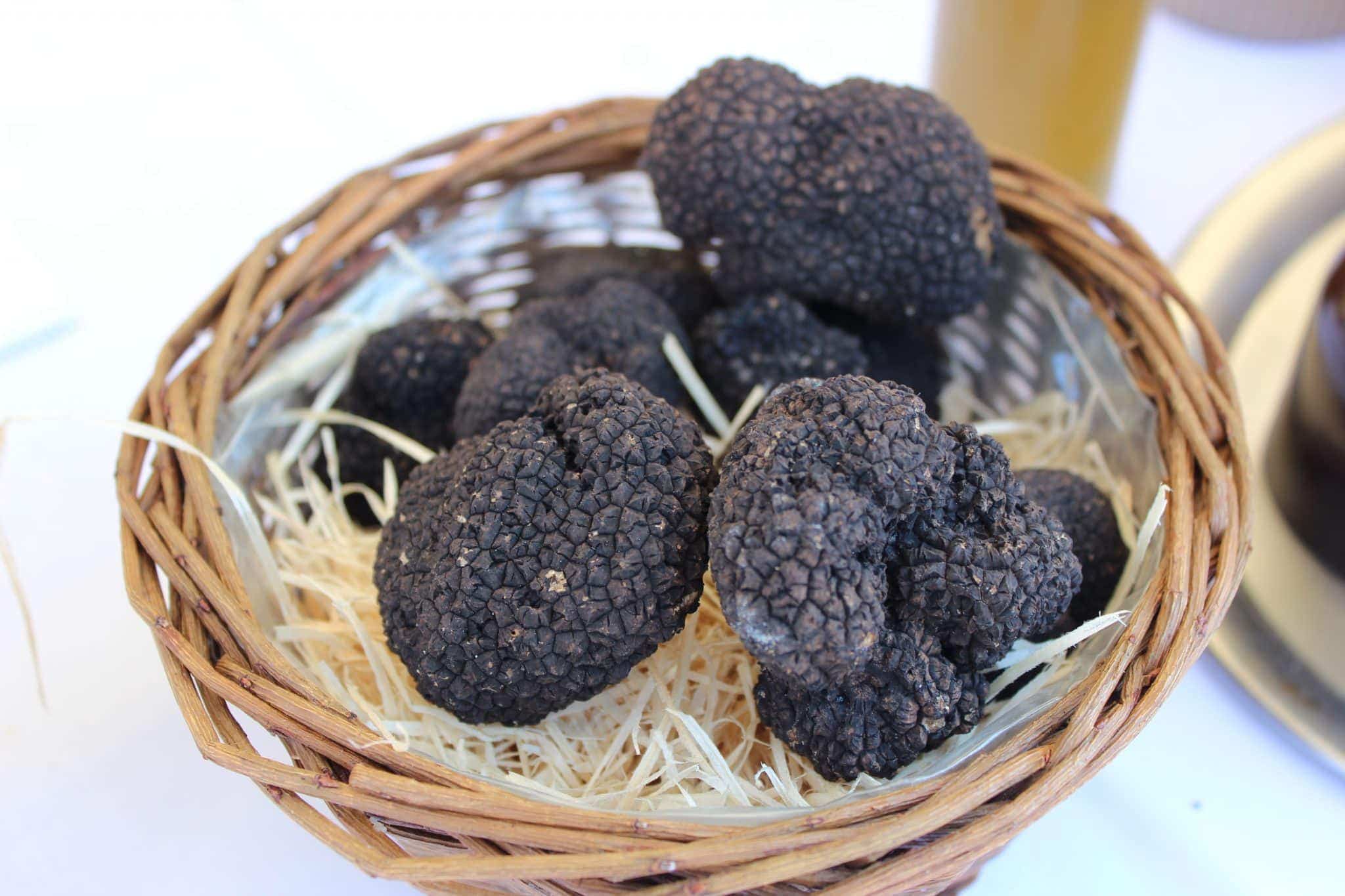 For years, the culinary world has been in a frenzy over some dark weird-looking lumps of fungi called truffles. They are among the most valuable culinary ingredient in the world today. In fact, their presence in any dish is considered the height of luxury.

Many fine dining restaurants proudly highlight dishes with truffles on their menu. World-class chefs have also lauded its epicurean value and even called it “the diamond of the kitchen.”

But is the edible fungus really worth all the ruckus it’s been getting? Does it really make dishes even more delectable than they originally taste? Or, as many things are inclined to be in this age of social media and information superhighway, is it all just superficial hype?

The Lowdown on Truffles

In order for us to determine its value, we first need to know what it is. So what are truffles? Some may argue that truffles are fungi but they’re really not mushrooms. However, truffles do bear spores and fruiting bodies, which are basically the main properties that make mushrooms. So yes, botanically speaking, truffles are indeed mushrooms.

Now that’s clear, let’s take the discussion up a notch. How are truffles different from other mushrooms such as those you often find in your risotto?

Basically, truffles are edible mushrooms. To be specific, they are the fruit bodies of several fungi from the division Ascomycota, family Tuberaceae, and genus Tuber.

This is why all edible truffles sport the first name “Tuber” in their scientific names.

Truffles are subterranean fungi because they grow and thrive underground, often on, or in close proximity to, tree roots. Usually, truffles attach themselves to trees such as oaks and beeches. That is where they draw essential nutrients in order to grow and thrive. 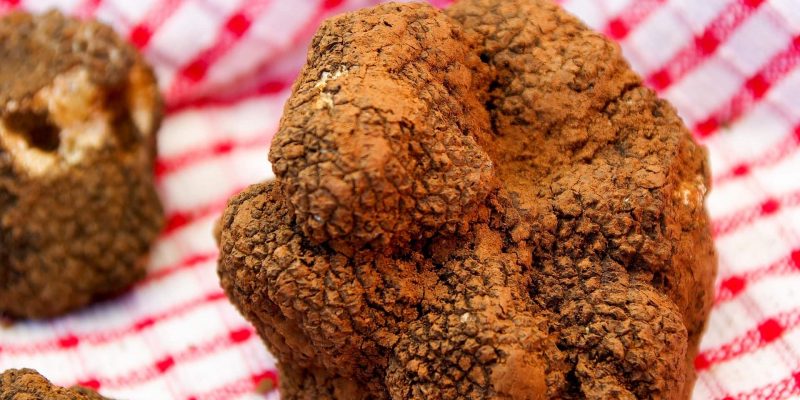 Using truffles in cooking started way back during ancient times. In ancient Greece, people associated truffles with the divine, particularly to Zeus.

This may have been due to the belief that a truffle was a product of water, heat, and lightning. As a matter of fact, the Latin poet Giovenale mentioned a legend that the truffle was created whenever Jupiter (the Roman counterpart for Zeus, the Greek god of thunder) hurls a lightning bolt against a tree.

And considering truffles grow on tree roots, and sprout after heavy rainfall, which also usually brings lightning, it’s quite easy to see how the origin stories of truffles came about.

Aside from the assumed connection to divinity, or perhaps because of it, people regarded truffles as not only delicacies, but also aphrodisiacs and medicine.

Indeed, ancient Sumerians as well as Athenians, at a later period, considered the truffle highly valuable and treated it as gourmet food.

Truffle was also a limited and rare commodity, even then. Not only could people only harvest them in the wild, but truffle growth is also highly dependent to the season, weather, and environment. It also requires the help of pigs or hounds.

Case in point, a Roman gourmet named Apicius, who lived during the first century BC, included several truffle recipes in his book De Re Coquinaria Book VII . He declared them among the most expensive dishes in his recipe collection. The Greek philosopher Pliny, also mentioned the truffle in his book Naturalist Historia.

Now, the truffle fell in favor during the Middle Ages. Why? Because numerous wars necessitated the practice of being frugal, which resulted in truffles becoming mere animal fodder.

However, the aromatic mushroom saw a significant revival of its culinary value during the Renaissance period, something that has lasted until modern times. 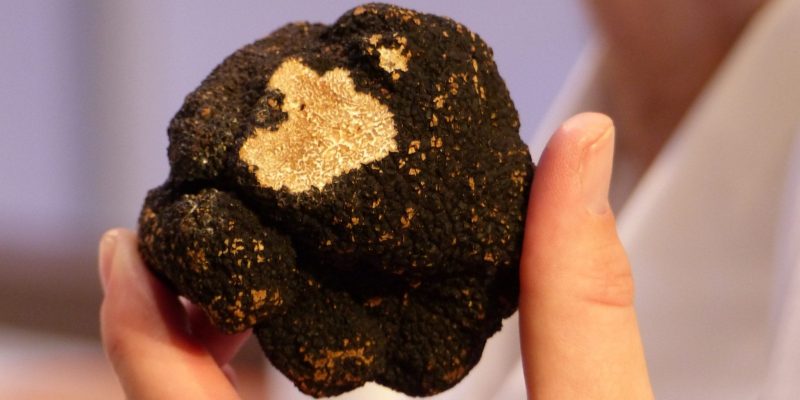 Although there’s no doubt that truffles are highly valuable in the culinary world, there’s still an ongoing debate as to its true appeal.

Most chefs, of course, recognize its culinary value. But some consumers think that it’s not all it’s cracked up to be.

They think it’s just some overpriced over-hyped gourmet item. In fact, some have described truffles to be as pungent as a smelly old sock.

Well, whether you are with the truffle fans or the naysayers, it can’t be denied that these prized mushrooms exude one of the most unique combination of aromas and flavors in the world.

Often, the general description for its flavor has been earthy and musky at the same time, with an intensity that is both intense and fine.

To attempt, however, to simplify its unique flavor into a few chosen adjectives is like saying all fruits are sweet and all vegetables are bitter. Truffles are more complex than that.

Not only do the trees on which they’re attached influence their flavor, there’s also the soil composition, season, location, and truffle species.

If you’ve used truffles in cooking before, or you’ve simply consumed them in some posh restaurant, you might have noticed that they don’t all look the same.

That’s because there are several kinds of edible truffles out in the market today, ranging from off-white to black.

Now, of all the 70 species under the genus Tuber, only 9 are edible and fewer than that are commonly traded for culinary purposes… and they are the following: 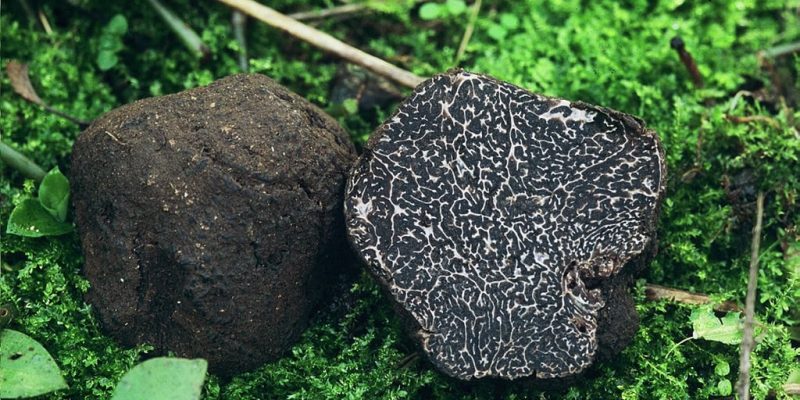 The second most commercially popular edible truffles in the world, this type is typically found in the Umbria region in Italy, most especially in Norcia and Spoleto, hence the name. It usually grows on oak trees in hilly and mountainous areas, and has a very intense aroma.

Most apt hunting period for this valuable mushroom is during the months of December up to March. It is blackish brown in color and has a smooth somewhat cloud-shaped appearance. 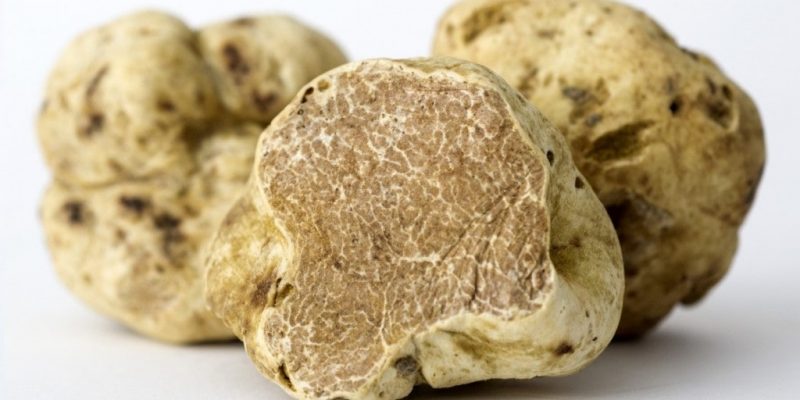 Also called an Alba white truffle, it grows in Piemonte region in Northern Italy, particularly in Alba. Farmers harvest, or hunt, them from September to December.

The white truffle has a strong fragrant aroma, and it is often pale cream to ochre on the outside while white to yellow-gray inside. It generally looks more rounded than black truffle, with irregular holes all over. 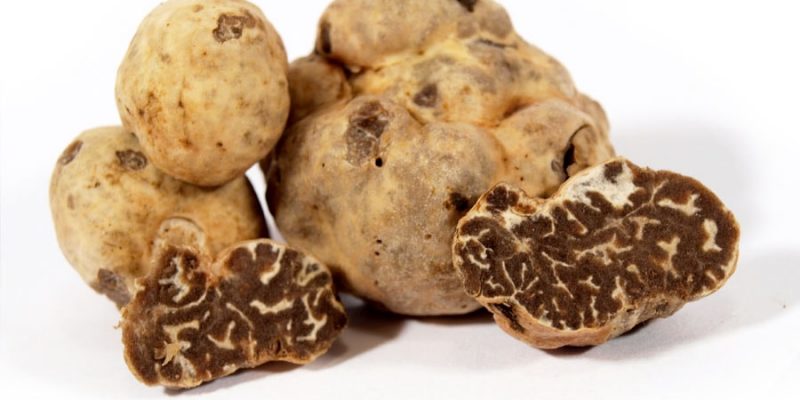 Not as valuable as the White Truffle, it is nonetheless very popular in the regions of Le Marche, Tuscany, and Emilia-Romagna. An irregularly shaped round with a yellowish smooth rind and off-white interior, people often confuse it with the Alba White Truffle.

Farmers, or truffle enthusiasts, hunt them from January to March. It often starts with a delicate pleasant smell that becomes stronger and like garlic as it ages. It is also known as Bianchetto Truffle. 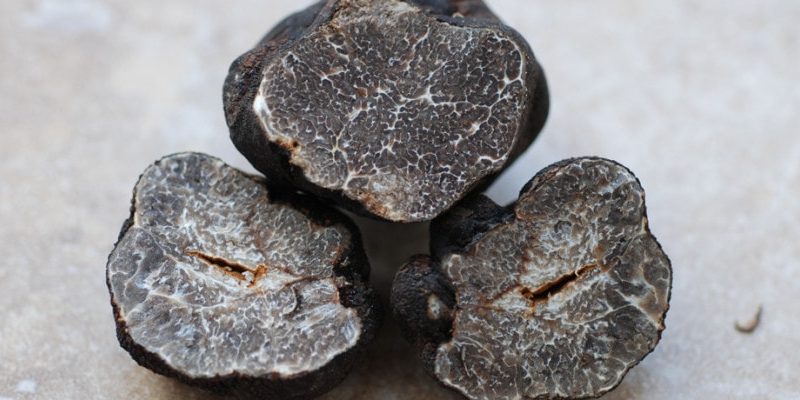 Typically found in central Italy, it usually grows on lime, oaks, and poplar trees. It has a smooth rind and irregular shape and is not as commercially popular as other edible truffles. Despite its lack of commercial popularity, it is still a highly valued edible fungus. 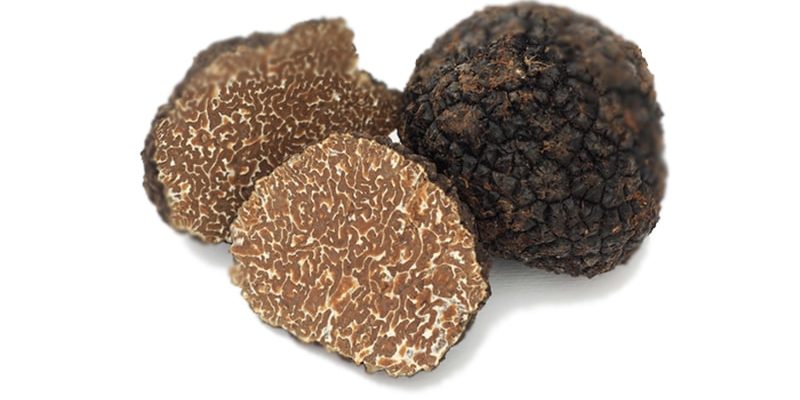 Also known as Scorzone, it is quite similar to Black truffle in that it has an intense aroma. But unlike the Black Truffle, it has a lumpy surface and a somewhat yellowish interior. It can also grow to quite a large size. Truffle hunters look for them from May to December, and they usually grows deciduous forest, on clay and sandy soil.

A bit similar to the Summer Black Truffle, it has a strong aroma but a tad more pleasant than Scorzone. Typically, hunters collect them from October to November. It is found in central Italy, particularly in the Umbria region. 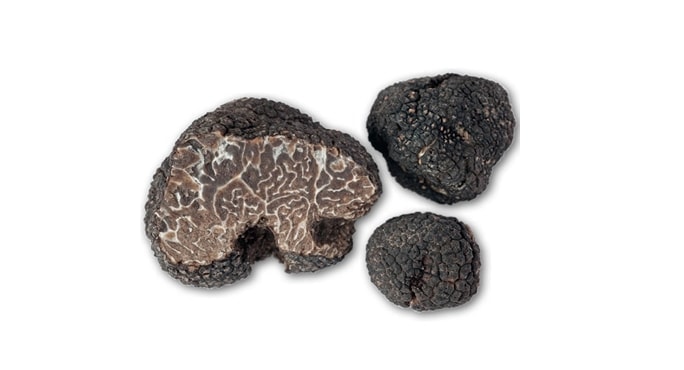 Actually only half as valuable as the Black Norcia truffle, the Black Winter Truffle is often confused with the more valuable mushroom because it is associated with the same trees and grows in the same environment.

However, it only has a slightly lumpy exterior with a grey brown interior. It smells a bit like nutmeg and hunters collect them from November to March.

Confused even further about what truffles really taste like? Well, there’s a surefire way to find out, and that is to try them out for yourself. Culinary experts say truffles significantly enhance the flavor of all kinds of dishes, particularly meat, omelets, pastas, and risottos.

The Truth about Truffle Farming

When you talk about truffle farming, it actually means hunting. This is because truffles are not traditionally cultivated like most vegetables, herbs, or spices. More aptly put, truffles are sniffed out by animals with heightened senses of smell such as pigs and dogs. 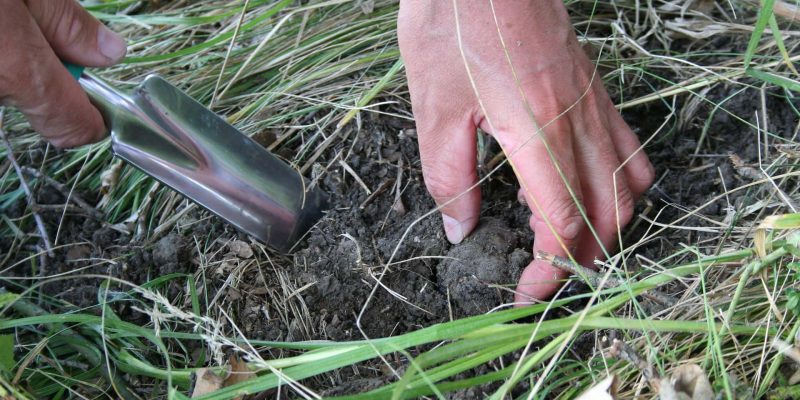 Although there are truffle farms today, originally, people hunted and harvested truffles in the wild, usually in forests, since they do grow attached to tree roots.

And since they grow underground, finding them can be difficult without assistance. In the old days, farmers used female pigs otherwise known as truffle hogs to remedy this.

A glaring disadvantage to using pigs though is that the chubby trotters love the truffles as much as gourmet chefs and tend to munch on them when they find them.

In fact, there’s a saying that truffle hunters who use truffle hogs tend to have missing fingers, a humorous quip that implies the need for truffle hunters to wrestle the prized mushrooms away from pigs on a truffle hunt. Due to this, many truffle hunters sought an alternative and are now using trained dogs.

But aside from pigs having the tendency to eat the prized goods, what are the other differences between a truffle hog and a truffle dog? Let’s find out.

Now, while both pigs and dogs have keen sense of smell, female pigs are especially attuned to sniffing out truffles.

You might say they have an innate ability to zero in on truffles buried underground. Dogs, on the other hand, need to be trained first before they are able to find buried truffles.

However, dogs are much easier to control and are uninterested in eating the prized mushrooms, which means a higher yield for the truffle farmer.

Today in France, many truffle farmers still use truffle hogs when hunting for these prized mushrooms. In Italy, on the other hand, the use of truffle hogs has been outlawed since 1985. Why, you ask?

It’s because it was discovered that when pigs dig for truffles, they cause damage to the mycelium on the ground and this significantly decreased the truffle production in Italy for some years.

Although truffles can be found in several countries around the world, it is only in Italy that you can find truffles in all regions.