Italian Taralli Recipe – How to Make These Addictive Crackers 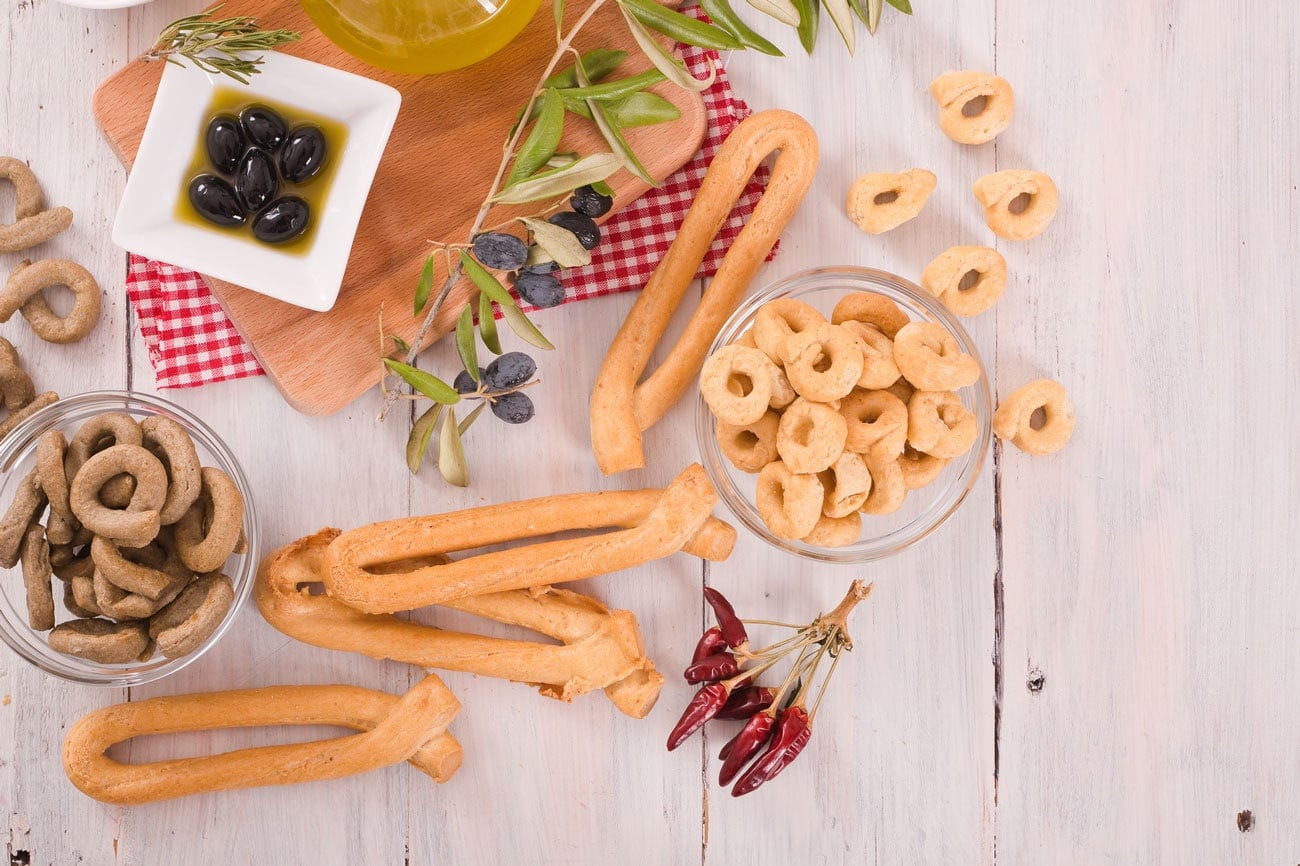 There is no certainty about the origin of the word “Tarallo”, indeed there is considerable disagreement about where the word came from.  The origins are inspired by different languages ​​and the most accredited suggestions are the four listed below:

– from the Greek daratos, a kind of bread

– from the Latin torrere, to toast

– from the ancient French danal, round bread

– from the Italian tar, which means wrapping.

The tarallo is a biscuit which was originally salty in taste but which over time has also acquired a sweeter variant. The basic ingredients are water, flour and yeast.

Tarallo is believed to have originated in two regions, Campania, in the area of ​​Naples and Puglia.

The common perception is that Neapolitan bakers, not wanting to throw away the remains of the leavened dough which occurred in the production of bread, began to produce this biscuit at the end of the eighteenth century, adding lard and flavoring them with pepper.

They worked the dough in two intertwined strips formed in a circle and knotted. Because the majority of the ingredients would have gone to waste, and adding a little lard and pepper was not expensive, the biscuits quickly became popular with people who did not have much money to spend.. Over time they have been enriched with other ingredients and at the beginning of the 1900’s almond was added.

For the Apulian version, the legend tells of a mother who, having nothing to feed her children and having few ingredients in the pantry, made small circles of pasta, simply mixing flour, oil and a pinch of salt: To make them look more exciting she closed them with a small final knot and cooked them in the oven.

In 1400, peasant families used to offer this food accompanied with good wine as a sign of friendship and cordiality.

In the nineteenth century bakers added pasta of the taralli to transform the shape into figures. These real puppets were then used to  decorate the tables of wedding banquets and were eaten at the end of the meal with a sweet wine.

The taralli are widespread in other regions of southern Italy and currently their variants are recognized as traditional Italian agri-food products in the following regions:

Taralli was sold in taverns accompanied by a good glass of wine or in the streets in the popular food markets in Italy, a forerunner of street food. 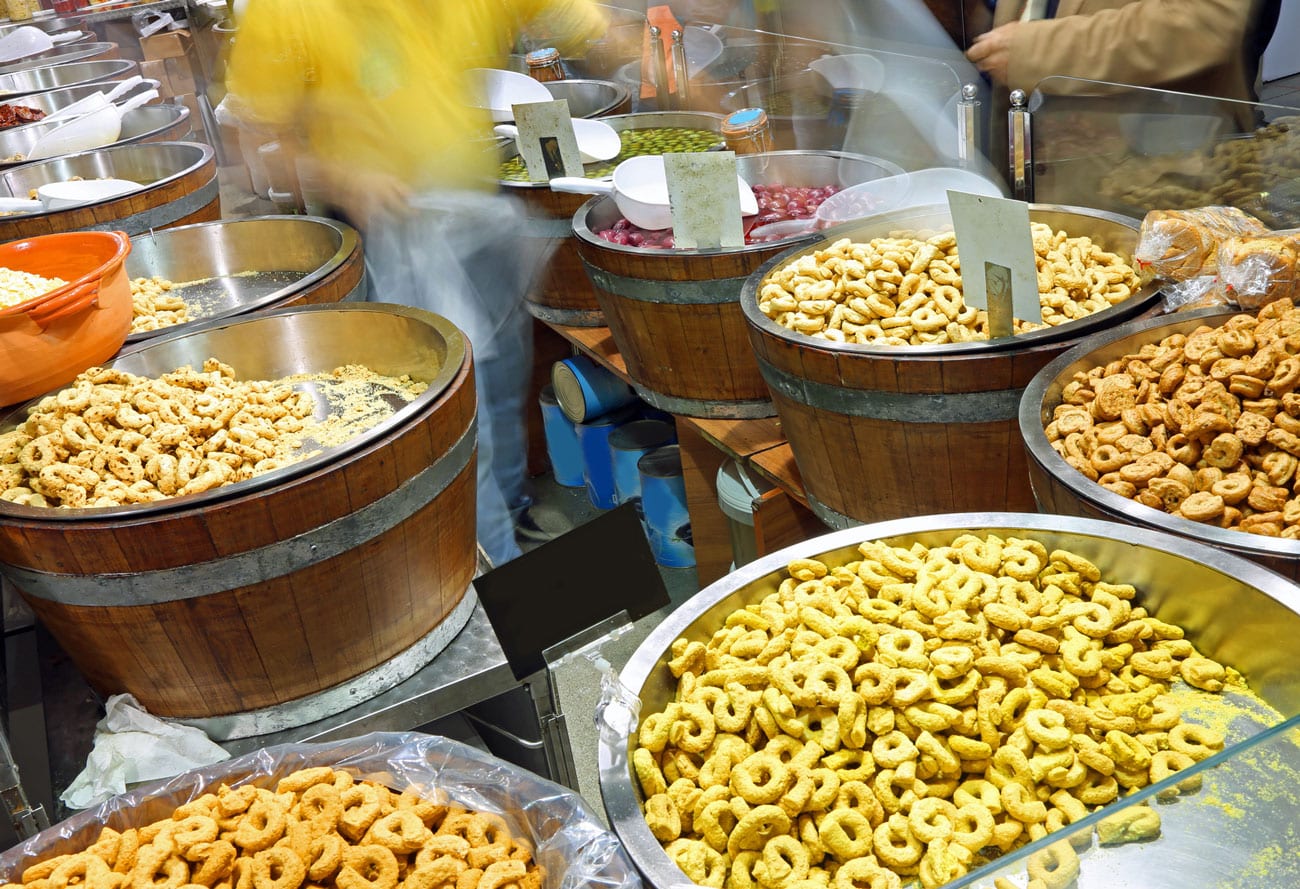 “Tarallaro” was the name given to the person who sold taralli. He wandered the street with the basket on his shoulders, shouting to call attention, offering his products lukewarm, because they were kept under a blanket. As with most foods, if the Tarallo could maintain a high temperature, the smells and fragrances released were more inviting and encouraged customers to purchase.

I conclude by quoting the saying “everything ends up with tarallucci and wine”.

This expression, born in taverns, still has a meaning today and is used to define arguments that do not have a serious conclusion, and we agree in a friendly way in front of a glass of wine and some taralli.

As for the preparation and cooking two methods can be followed: the first involves baking in the oven immediately after leavening, the other option involves placing the mixture in hot water for a few seconds, and then regular baking in the oven. When prepared using this method it is given the name of scaldatelle or scaldatelli.

Whatever the cooking method used, the basic ingredients are soft wheat flour, yeast and water.

The flour is mixed with the yeast (sourdough) with the addition of warm water between 20 and 30 degrees and 2% salt.

The amount of water will depend on the degree of humidity in the environment and the type of flour used as this has an influence on its ability to absorb water. The ratios can vary but generally it is consists of 35% – 40% water, then about 20% extra virgin olive oil before adding the flavors and spices.

The dough is usually worked by the experienced hands of women, if not by the bakers, and then divided into sticks about 15 cm long. These are then twisted and/or knotted and left to rise on a floured surface and under a cotton cloth, sheltered from drafts and in a temperate environment.

At the end of the leavening, which will last a variable time dependent upon the environmental conditions, the amount of yeast used and the type of flour used, but dictated by the sight and experience, the taralli are thrown in hot but not boiling water. As soon as the taralli rises to the surface they are immediately removed from the water. They are drained and left to dry over a cloth, and then placed in the oven (possibly wood) and cooked at a moderate temperature for about 1 hour. 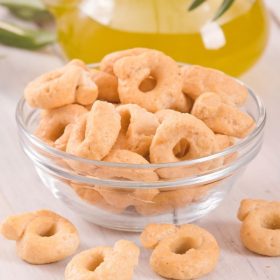 How do you eat taralli?

Taralli is the quintessential snack of southern Italy, traditionally eaten plain and dunked in wine. However, there are also a lot of flavors that can be added – fennel, onion, garlic, sesame, cheese, chocolate, etc. It also pairs well with aperitivos, sherry, rosé and white wines.