Quick Navigation show
1 What is Caponata?
2 Why is it called caponata?
3 Variations of the Dish
4 Sicilian Caponata Recipe
4.1 Ingredients
4.2 Instructions
5 Recipe Notes
5.1 How to store caponata
6 A Little Bit of History of Caponata

Eggplant caponata is an Italian appetizer from Sicily made from eggplant and other fried vegetables served at room temperature.

Throughout Sicily, there are countless variations of Caponata. Some use octopus and seafood, other pine nuts and raisins.

Nonna’s recipe adds potatoes and bell peppers, which is what I grew up on and is my standard for a delicious Caponata.

My favorite way to eat it is by toasting some ciabatta bread slices and piling some Caponata on top of each slice. Like a crostini.

Why is it called caponata?

There are no proven theories on the etymology of the word caponata. However, some say that it could be related with the Iberian terms capirottata, capirotada or capironades .

It also has a close relationship to the Latin term “caupona”, which means tavern, meaning that it is the equivalent of “tavern food”.

Others claim that the sailors were the first to use this sweetish sauce to soften their hard pieces of bread called “cappone di galera.”

Still others say that this sweet and bitter dish was only consumed by Sicilian nobles. Who served it alongside the “capone” (mahi-mahi), a white fish with fine dry meat. While it was normal for the nobles to eat this dish, It was a luxury that most people were not able to afford. So, they replaced it with eggplant, adapting the dish to fit their economic situation.

The first official mention of the real eggplant caponata dates back to 1759 in a book printed in Messina. It was defined as a “dish made of various things”.

Variations of the Dish

Throughout Sicily, you can encounter close to 40 variations of caponata. However, they all have one thing in common: the sweet and sour dressing, which gives the vegetables a unique flavor.

Every city or town has its own particular interpretation. In Palermo, for example, the caponata does not include peppers.

Other variations include roasted eggplant instead of fried, green olives instead of black and other more modern versions even include balsamic vinegar.

Even within the same village there are different versions. Each one claimed to be the correct version, the only authentic one.

Though many different recipes exist and though they are each unique they have one thing in common. Each caponata recipe is treasured by every family and handed down from generation to generation.

While originally it was a complete meal served with bread, today caponata is generally enjoyed as an appetizer or a side dish and must be eaten at room temperature. 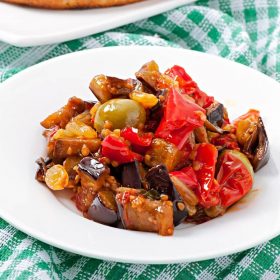 This version is all vegetables and the flavors are bursting with each bite. It is a great appetizer to have with a glass of Sicilian Corvo Rosso wine that your guests will thoroughly enjoy.
4.35 from 43 votes
Print Pin Rate Save Recipe Recipe Saved!
Course: Appetizer
Prep Time: 1 hour
Cook Time: 15 minutes
Total Time: 1 hour 15 minutes
Servings: 10 servings
Calories: 149kcal
Author: Nonna Box

How to store caponata

You can store caponata in the fridge for up to 3 days in a covered glass or plastic container. Before serving, bring it back to room temperature by keeping it out of the fridge for a couple of hours.

A Little Bit of History of Caponata

Greeks, Normans, Carthaginians, Arabs, Spaniards and the French dominated Sicily over the centuries. They gradually influenced and enriched the local cuisine.

If you add to this mix of cultures the products of the sea, you can easily guess the reason for its unique cuisine.

It is this context that makes Caponata one of the most representative dishes of Sicilian cuisine.

The main ingredient is the Italian eggplant, a plant belonging to the Solanaceae family. It is often called “bad apple” because of the solanine which gives it the typical bitter and acidic taste.

Its origins are not yet well known. It seems, however, that this vegetable hails from the hot areas of South Asia, perhaps from eastern India and China.

Greeks and Romans weren’t familiar with eggplant until the Arabs brought it to Sicily from North Africa. They introduced it after the conquest of the island starting in 827. It slowly became an important ingredient in Sicilian cuisine and is used in many recipes.

Another essential ingredient of the Caponata is the tomato. Christopher Colombus brought it to Europe from the Americas a few centuries later.

To complete the list of the ingredients we find onions, olives, capers, celery, vinegar and sugar. Although celery was initially used only for ornamental purposes.

The agro-sweet seasoning is the fundamental element that characterizes the caponata, and again we owe it to the Arabs.

In fact, this peculiar seasoning had been central to Arab cuisine since ancient times. It landed in Sicily again thanks to the Arabs who enjoyed the contrast between spicy and sweet.