Pansotti is a stuffed pasta typical of Ligurian cuisine. It is characterized by a rich meatless vegetable filling and it is seasoned with a particular walnut sauce that enhances the flavor.

The shape of the pasta can vary from triangles to large tortello. The name pansoto derives from the word pansa, which translates to belly. This is due to the characteristic shape of the pasta. However, there is an unlikely albeit more legendary origin for the name that claims it is derived from General Pansoit, who invented a pasta similar to pansotti in order to feed his troops who were in the Ligurian Riviera  in the first part of the nineteenth century.

Pansotti is one of the gastronomic symbols of the eastern Italian coast and their popularity extends from Genoa to the entire riviera. It is precisely in the latter part of Liguria  that  the pasta has evolved.  It is a close relative of ravioli but it differs in size and filling. Pansotti is larger, and  the filling consists of a particular mixture of wild herbs (the preboggion) which is enriched with prescinseua cheese and flavored with the marjoram.

Ligurian ingredients for a delicious and traditional fresh pasta

The preboggion is a variable set of different wild herbs that can be found in the fields near the end of winter. The variability of the composition is caused by the period in which they are collected. In Genoa you can easily find these bunches of herbs also for sale in street markets. The term preboggion derives from the dialectal form preboggii which means blanch (pre-boil), a necessary step to use these herbs, both in the filling of pansotti and in soups or salads.

The prescinseua is a fresh Italian cheese typical of the Genoese area. It is obtained from cow’s milk, although historically it was also obtained from sheep and goat’s milk, which after curdling is filtered through a cheesecloth. The result is a cheese with a characteristic slightly sour taste very common in the Ligurian Levant where, traditionally, it is added in small quantities even in pesto, as well as being the main ingredient of various classic dishes. 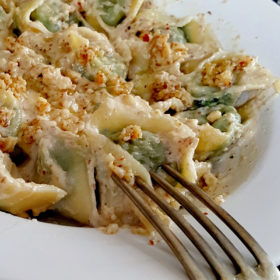 You can follow the recipe for the walnut sauce here. Alternatively, you can purchase it from your favorite Italian store.
Liked this recipe?Follow us NonnaBox for more!
24 shares